We are officially off to the slowest start of any fall season in the past 16 years! While we focus on banding and not surveys in the fall, the few times someone has been out to walk the standard route not much has been found, so the shortage is not just limited to the banding area. 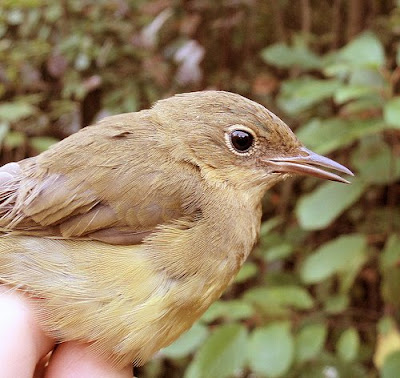 Connecticut Warblers are very sought-after birds, as they are not very common and notoriously hard to see. We band a fair number of them at RRBO, especially in fall. They are usually young birds, and the dull young females make you wonder what all the fuss is about. This bird was banded on 19 September; another individual bird was seen on a survey the previous day. 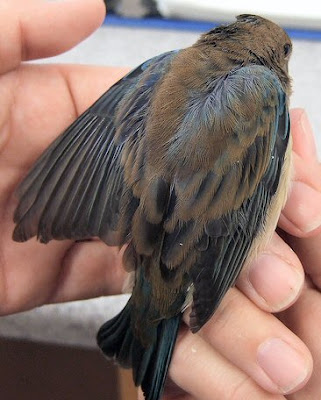 Indigo Buntings appeared in our nets this week. The bird above is probably the bluest female Indigo Bunting I have ever banded. This was an adult bird, and male-like coloration in old females is not too unusual -- I see it pretty often in Baltimore Orioles. 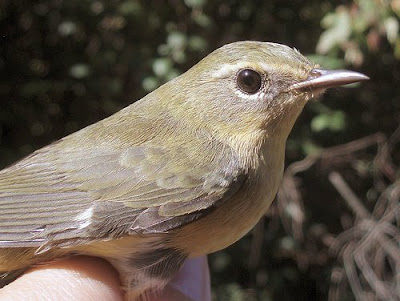 Female Black-throated Blue Warblers also don't compare to their gorgeous male counterparts. I don't band a ton of this species, but I did catch four this week -- and they were all females. 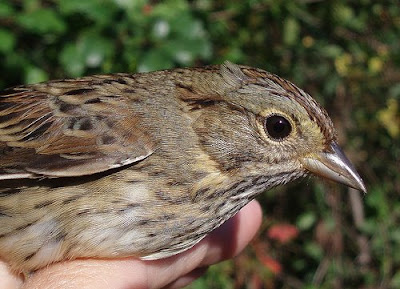 Sparrows begin moving through a little later than warblers. Our first Lincoln's Sparrows were banded this week. These are a commonly banded, but rarely seen, species at RRBO. 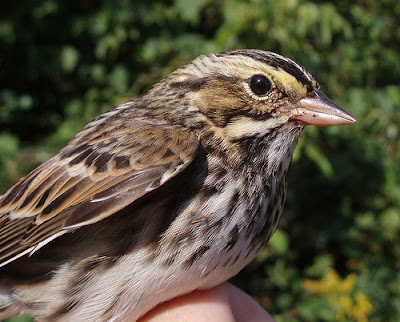 Savannah Sparrows are another handsome streaky-breasted species, but the streaks are wide and on a clean white breast, rather than fine streaks on a beige "vest." 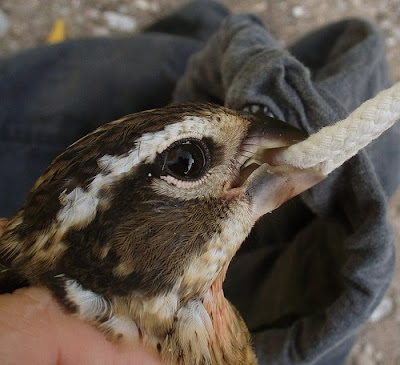 Rose-breasted Grosbeak (Pheucticus ludovicianus)
One thing you learn early on as a bander: if you catch a grosbeak, give it something besides your fingers to bite! And there's a new face at RRBO who will learn this lesson soon... 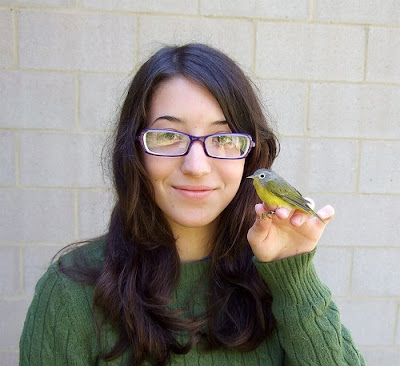 I'd like to introduce the newest member of our banding crew, Dana Wloch (and her friend, a Nashville Warbler). Dana is a UMD student with a strong, lifelong interest in birds and wildlife. She tells us that the historical figure she'd most like to have dinner with is Charles Darwin, and the obsolete object she can't seem to part with is a dried up fish given to her as a gift. Dana is refreshingly enthusiastic and a fast learner...I hope she can put up with me us for years to come. Welcome to team RRBO, Dana!
Posted by Julie Craves
Email ThisBlogThis!Share to TwitterShare to FacebookShare to Pinterest
Labels: Banding