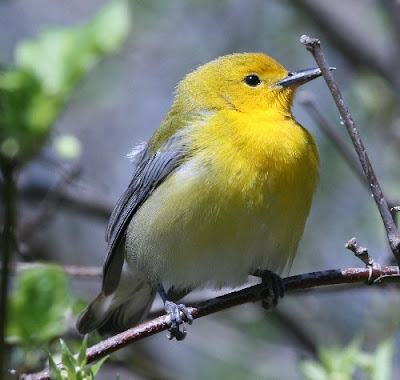 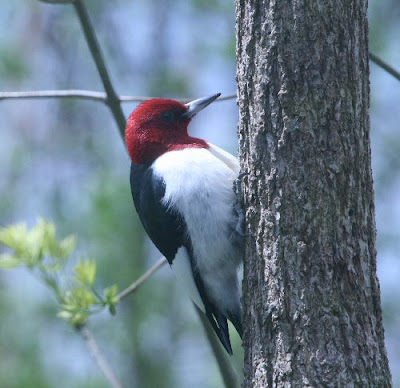 As expected there were lots of new spring arrivals over the week. Notable were an Indigo Bunting on 28 April, a new early date by a day and a Tennessee Warbler on 29 April that tied the early spring date.
Posted by Julie Craves No comments:
Email ThisBlogThis!Share to TwitterShare to FacebookShare to Pinterest
Labels: Birds and bird surveys

A total of 58 species were recorded on campus this week. The nice weather over the weekend produced some first-of-the-season species: Green Heron, Blue-gray Gnatcatcher, and Brown Thrasher. Two Blue-winged Teal were seen on Fairlane Lake, also on the weekend. Today, a Sandhill Crane flew over campus.

Cool and dreary weather returned on Monday, and migration has been nearly on hold. Ruby-crowned Kinglets are beginning to outnumber Golden-crowned Kinglets, and there are still some Pine Siskins around, but the numbers and variety of migrants has been sort of at a standstill. But it looks like things are about to change. Skies will clear tonight, but the wind won't turn to the south until tomorrow night. Beginning Friday, we should see a nice movement of migrants. The cool weather has slowed down leaf-out, so they will be easy to see in the coming days.
Posted by Julie Craves No comments:
Email ThisBlogThis!Share to TwitterShare to FacebookShare to Pinterest
Labels: Birds and bird surveys

The first week of campus spring surveys has been completed. It's felt like early March out there, and the diversity and numbers of birds have reflected the weather.

A total of 51 species were recorded. The only FOS (first of season) bird recorded was Yellow-rumped Warbler, with 7 recorded on 14 April. Other highlights included four Ring-necked Ducks on Fairlane Lake on 13 April, a flyover Peregrine Falcon on 14 April, and a lingering Red-breasted Nuthatch all week.

There are a handful of Pine Siskins around, and most are hanging around the pine trees by the estate. I've seen them chasing each other around and engaging in courtship flight, so they may be nesting there.

Brown Creepers can be fairly common, if unobtrusive, spring migrants here, but two have been seen consistently for several weeks near the Rouge River on the north end of campus. We do have nesting records here, so perhaps these are also breeders.

There have been a few Hermit Thrushes and a couple of Winter Wrens, but now they are starting to sing, which is quite a treat. The warm weather is supposed to begin tomorrow, so I expect many more first arrivals in the coming days. I'll be out of town this weekend, but the surveys will be well-handled by Jim Fowler and Jerry Sadowski.

I started my daily spring bird surveys last week. I follow a standardized route, and I put my results into eBird, where you can view them by selecting View and Explore Data, Week Report (choose a date), Hotspots in Michigan. Note that there are multiple listings for the natural area here on campus, because other people also put their sightings into eBird. My survey route hotspot is UM--Dearborn--Rouge River Bird Observatory.

Nearly every day, I do extensions to my standard route. I also put these in eBird, but they are not public hotspots. Results are included in daily totals, and I report highlights on RRBO's Latest Sightings page.
Posted by Julie Craves No comments:
Email ThisBlogThis!Share to TwitterShare to FacebookShare to Pinterest
Labels: Birds and bird surveys

My paper on the fall stopover ecology of thrushes has finally been published. In addition to all the time it takes to collect data, analyze it, and write a good paper, actually getting it out for all to see is one LONG process! I submitted the paper in April 2008. It went out for peer review, came back to me so that I could respond to questions and comments from the reviewers, and went back to the editors, who approved it in August 2008. Then came the process of checking page proofs for errors and scheduling publication. So at long last, it is in the current issue of the Wilson Journal of Ornithology.

You can see the publicly-available abstract and tables at BioOne. I wrote a brief summary of the work last fall here at Net Results.
Posted by Julie Craves 4 comments:
Email ThisBlogThis!Share to TwitterShare to FacebookShare to Pinterest
Labels: Research news
Newer Posts Older Posts Home
Subscribe to: Posts (Atom)