European Goldfinches have now been nesting in northern Illinois and southern Wisconsin for over 15 years. With the completion of the latest Wisconsin Breeding Bird Atlas, it's time to summarize the distribution and breeding information on this species.

As of December 2021, I am working on a paper that will briefly cover the history of this species in North America with more detail of the status over the past 20 years; where this species is currently found and where it has nested recently; a focus on the origins, spread, and distribution in the Great Lakes states; breeding phenology and ecology in this region; and as much as can be gleaned about the ecology and potential impacts of the establishment of European Goldfinches in North America.
Nick Anich, coordinator of the Wisconsin Breeding Bird Atlas, and I are collaborating on this part of the project. We've met with several other researchers who are interested in looking at population genetics and morphology of European Goldfinches across the continent.

Around 2001-2004, a number of other European bird species were reported from the western Great Lakes area (scroll down on this page for details). Of those, Great Tit (Parus major) is still nesting in Wisconsin. I believe a couple of other species may still be present and reproducing, but they are much more difficult to quickly identify and a status update on them will have to be a future project, although I still collect records.

The initial task with the goldfinch project is just to attempt to compile a database of sightings for the past 20 years or so and cull important information from this. This data is coming from multiple sources, including hundreds of sightings provided directly to me from people responding to posts on these pages and the former Rouge River Bird Observatory web site. I'm indebted to these people, because they provide the backbone of early sightings that were never reported elsewhere.

The majority of more recent records come from eBird, but because European Goldfinches are non-native and therefore not "countable" on birders' lists, they have not been adequately reported. This has been further compounded by differential treatment of non-native species in each state. We are working with all reports that have been submitted to eBird (including those not showing in the public maps and output), but believe there is a substantial amount of data that, unfortunately, is lost to history. The eBird data we do have is challenging to work with -- for example, of the 6300+ eBird records we have, many are duplicates of the same bird, sometimes the same day or multiple days at one location (which may be recorded in different ways by different observers).

I am no longer actively collecting data. However, if you have any sightings in North America from 1999-2021 that have not been entered into eBird, please do so. Even if they do not appear in the public output, we will see them when we access the eBird database, or they will be available to future researchers. If you have further questions or information, or information on other European bird species (list below) you can contact me via the form near the bottom of the right sidebar -->

You can read a great deal of background on the European Birds in the Midwest page. I've included this post at the beginning of that page as many people land there first, so scroll down a bit for the earlier information.

Other posts on Net Results about European Goldfinches: 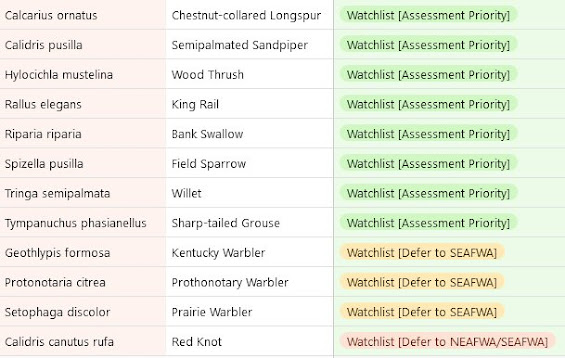 Birder Robert (Bobby) Irwin found a Neotropic Cormorant (just assigned to a new genus, and now Nannopterum brasilianum) off Humbug Island at the Detroit River International Wildlife Refuge on 28 June 2021. The eBird checklist with photos is here. As of 19 September 2021, it was still being seen, at least sporadically.

This identification is not an easy call. I happened to have visited the Refuge the previous day, one of the first times I have returned after spending years doing bird and insect surveys for the USFWS prior to the Refuge opening to the public. Various habitat modifications have resulted in a nesting colony of Double-crested Cormorants just north of the new fishing pier, with nearly 30 nests that I could see. Most of the young have fledged, so there were dozens of cormorants in the trees, flying around, and in the water, all in various plumages. Neotropic Cormorants are smaller than Double-cresteds, have longer tails, and different plumage on the face, but these differences are not always obvious, especially when the birds are moving around or distant. Kudos to Bobby for picking this one out.

As you can see from the range map, this bird is well out of range. However, they are known to wander a lot, and there are a number of Michigan records, mostly from the past few years. In fact, there is a pair nesting at Lake St. Clair Metropark in Macomb County right now!

I have maintained a comprehensive Wayne County checklist, including historical records, for many years. By my accounting, this makes species #352 for the county, of which 9 are extirpated/extinct, hypothetical, or not "countable."

Posted by JAC No comments:
Email ThisBlogThis!Share to TwitterShare to FacebookShare to Pinterest
Labels: Birds and bird surveys

Varied Thrush (Ixoreus naevius) is one of my favorite birds. Not just lovely to look at, but also listen to, if you happen to be within the breeding range of the species which is centered more or less in the Pacific Northwest. There are four records of Varied Thrush in Wayne County, two of which are from Dearborn. I'll start there, of course.

Dearborn's first Varied Thrush was a one-day wonder, a female along the edge of the Edsel Ford High School campus found by Jim Fowler, Jr. on 16 April 2004. It was only seen by a handful of us because as I recall it was late afternoon when it was found and we couldn't relocate it the next day. It's possible it was present before or after in the adjacent residential yards or just across Rotunda in the little woodlot on Ford engineering property.

A much more cooperative bird showed up on 12 February 2021 at the feeders of a couple whose yard backs up against the Dearborn Hills Golf Course. The homeowners initially let birders come to view the bird from the side of the house, but after only a few hours the situation grew out hand. Observers were directed to the golf course, where on weekdays one can walk a half mile or so on a perimeter trail and look for the bird. It was still present on 4 March 2021, although not everyone is successful in seeing it, especially if care is taken not to aim binoculars or spotting scopes straight into backyards or kitchen windows.

There are two previous Wayne County records for Varied Thrush. The first was a bird present from 9 to 31 March 1971 in Rouge Park near the old Nature Center (once at the southwest corner of W. Chicago and Outer Drive). This was found by Detroit birding legend Ernie Carhart (1911-1997), whose lived nearby and whose favorite birding spot was Rouge Park. All Wayne County, and especially Detroit, birders owe much to Ernie; here is a little write-up and photo of Ernie by Karl Overman (another pretty legendary guy).

And finally, a Varied Thrush was at the home of Rosann Kovalcik and her (then) husband Martin Blagdurn in Grosse Pointe Woods from 3 to 15 December 2000. My (then future) husband Darrin O'Brien and I were among the many people who sat in Rosann and Martin's bedroom looking out the window, waiting for this bird to show up at the feeders. We missed it on our visit, but we did get our picture in the paper because it got some good press coverage.

Although their home range is far, far away from Michigan, Varied Thrushes tend to wander a great deal and I'm a little surprised there are not more Wayne County records. This is one of the roughly 60 species in the county of which there are 5 or fewer records.

That's out of 344 county species I have documented over the past 30 years or so (including historical records).  I am not sure I have the energy to publish a fully annotated checklist with citations to county birds, but I might -- if there is interest -- do one on the rarer species one of these days.