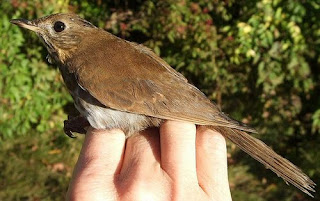 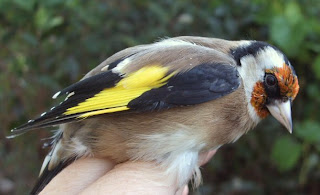 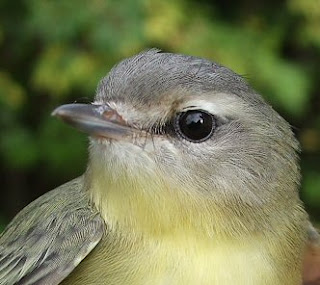 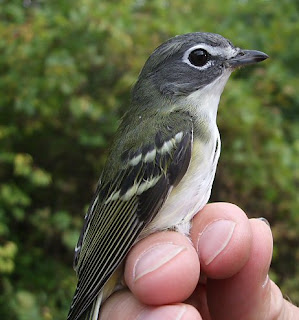 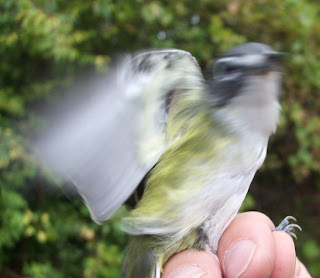 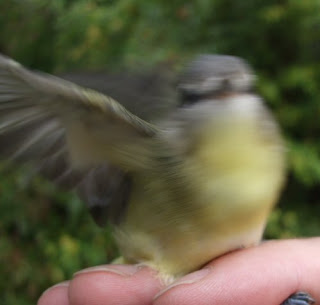 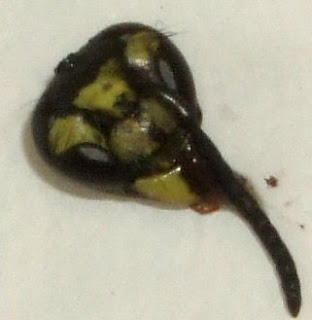 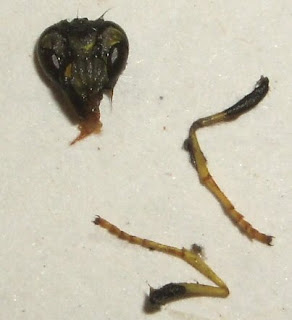 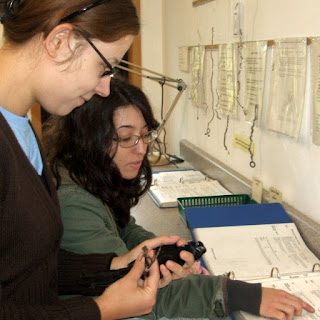 It was a fun week. More birds coming up.
Posted by Julie Craves No comments:
Email ThisBlogThis!Share to TwitterShare to FacebookShare to Pinterest
Labels: Banding

On 13 September 2010, this Veery (Catharus fuscescens) was banded by the Rouge River Bird Observatory. It was so different-looking that the species identification was not readily apparent when it was pulled from the net. The bird was a young (hatching-year) bird based on plumage characteristics and, conclusively, a largely unossified skull 1. 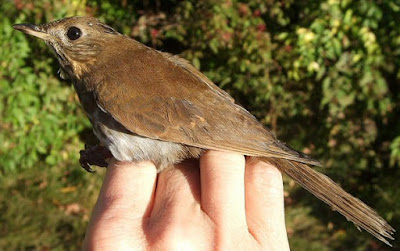 The upperparts of the thrush were a rich, medium brown (the lack of a contrasting, rufous rump and tail, plus measurements and other plumage characteristics, eliminated Hermit Thrush, Catharus guttatus).

The grayish face without an eye ring quickly ruled out Swainson’s Thrush (Catharus ustulatus,but had me briefly considering Gray-cheeked Thrush (Catharus minimus), and some measurements between this species and Veery overlap. The sixth primary feather of Gray-cheeked Thrushes, however, is usually emarginated, while in Veery this feather is only slightly emarginated, as was the case with this bird. Nearly all measurements were a little too large for this bird to be a Bicknell’s Thrush (Catharus bicknelli). Neither of these two species is noted to have plumage with this warm coloration.

This left Veery. The color of the RRBO bird was not the bright, nearly orange, color that is typical of most eastern Veeries seen here in southeast Michigan, seen at right. This is the nominate subspecies, C. fuscescens fuscescens. See, for example, this photo from New Jersey.


There are up to six subspecies of Veery, although they are often combined into three groups. One is the nominate eastern C. fuscescens fuscescens which breeds in much of eastern Canada, through New England, south through much of the Appalachians. Another is the western C. fuscescens salicicolus, sometimes called the Willow Thrush. References describe the upperparts as being “dull, dark brown with a warm rufescent-olive tinge” 2, “dull, moderately dark brown with a reddish tinge” 3, and “slightly more olive-brown and on upperparts and only faintly tinged rufous comparied to nominate” 4. While descriptions also indicated that  has more distinct spots than the nominate race, the rich reddish color of the upperparts, without olive and evident even in the shade, did not seem to fit this western race. 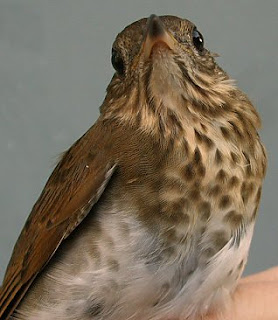 Catharus fuscescens fuliginosus, or “Newfoundland Veery,” is a subspecies that nests in southwest Newfoundland, Magdalen Island and south-central Quebec, perhaps into northern Maine and southern Nova Scotia. The upperparts are described as “deep reddish brown,” “deep bright reddish brown,” and “slightly deeper or warm reddish-brown …than either nominate or salicicolus.” References also note the spots on this race are more distinct, with Clement (2000) specifying “sharply defined reddish-brown, arrowhead-shaped spots (larger than on nominate) extensively across breast.” The distinctness and shape of the spots is especially evident in the RRBO in the photo at left.

Our bird, then, seems to fit the description of a “Newfoundland Veery.” Some breeding populations in the southern Appalachians (considered by some as C. fuscescens pulichorum) also have upperparts similar to fuliginosus, as do some other western and Great Plains subspecies often lumped with salicicolus, but overall more plumage characteristics of the RRBO bird seem to coincide with fuliginosus than other races. Most authors note that there is variability among individuals and some that appear to be “intermediate forms” so we can’t be 100% sure of the provenance of this bird, only that the plumage corresponds to the Newfoundland race.

Finally, we can’t rule out a hybrid. Kent McFarland of the Vermont Center for Ecosystem Studies and member of the International Bicknell’s Thrush Conservation Group told me he had once banded a Bicknell’s x Veery hybrid. Very intriguing, but not possible to determine without a feather or tissue sample, and someone able to do DNA work.

Veery is the least-common of the Catharus thrushes banded at RRBO, and it was a real treat to catch this one.

Martin Reid has an interesting page of Catharus thrushes, including some variations on Veeries.

Weeks 3 and 4 (August 29 to September 10) were nothing much to write home about. We banded 117 new birds and handled 27 recaptures of 23 species. Looking back on the first month, it seems to be shaping up to be an above-average season for House Wrens, Red-eyed Vireos, and American Redstarts.

How can anybody get tired of seeing an adult male redstart?

In the fall, you see many more female-plumaged redstarts than these gorgeous males. Some are adult females, many are young birds, both males and females. Male American Redstarts do not get their bold black-and-orange plumage until their second full molt (for birds born this year, that will take place next fall). Still, young male redstarts are often a little more orange than yellow and can sometimes be differentiated from the even duller females. The young male below was especially bright.

Although it's a little hard to see in the photo above, the uppertail coverts are also quite dark and they contrast with the grayer-colored back. The orange patches at the base of the wings are...orange.

Meanwhile, in the young probable-female below, the patches are dull yellow, and so are the patches on the tail. 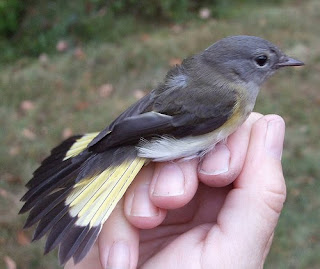 The tail-fanning is a characteristic behavior of this species, earning it the name "candelita," or "little flame" in some Latin American countries where it spends the winter.

Speaking of tails, Palm Warblers are beginning to come through. 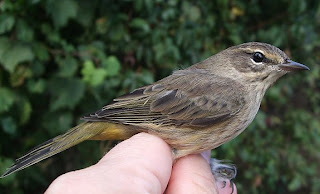 Tail-pumping is a very distinctive trait of this species. They do not, however, do this in the hand. 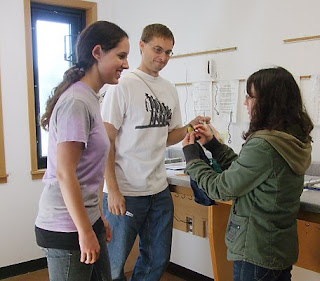 And let's welcome our first new bander of the fall 2010 season, Carmen Volante. Carmen is a senior here at UM-D and is shown here on the left with one of our veteran banders Andy Dettling, and Dana Wloch, the undergraduate research associate in her second year of looking at robin and catbird diets.

The middle week in September coming up is often our best week for diversity of birds, especially warblers. We'll see what we come up with!
Posted by Julie Craves No comments:
Email ThisBlogThis!Share to TwitterShare to FacebookShare to Pinterest
Labels: Banding
Newer Posts Older Posts Home
Subscribe to: Posts (Atom)