The Detroit River Michigan-Ontario Christmas Bird Count was held, as it is each year, on January 1. This was the 36th year for the count, which is centered at I-94 and Warren Ave, and the 20th year that RRBO has coordinated the field work in the city of Dearborn.

The weather was probably one of the most miserable we have experienced on a count day. Temperatures did not exceed 11F all day, it was windy, and it snowed continuously. As it had been snowing much of the previous night, roads were slippery and a hazard. While waiting at an intersection at one point, we narrowly missed being hit by a car that could not stop; the car next to us was far less fortunate.

As we expected with the weather, birds were not easy to find. Counting on the west side of the Rouge River opposite the Henry Ford Community College and University of Michigan-Dearborn campuses, Cathy Carroll had the best birds. She had a Yellow-bellied Sapsucker, which has only been found on two previous counts. She also had the only Golden-crowned Kinglets of the day (found on five previous counts), as well as the only Brown Creepers and Northern Flicker. Her best bird was probably this forlorn-looking, snow-covered American Black Duck in the river near Dearborn's Ford Field. This is a species that is getting more and more infrequent in the city.

While the weather was a notable cause for a lack of bird numbers, it was not the main culprit. This year the sunflowers on the Ford World Headquarters site were planted late and got caught by a frost while they were still in bloom, so they did not set seed. Last year, this field had thousands of birds, including 3500 House Sparrows. This year, all we had there was a single Northern Cardinal.

The fields at Hubbard and Southfield have been planted in hay the last few years. Not much going on there, except for nearly 300 Canada Geese hunkered down in the stubble. One of them was familiar, a goose with a neck collar that we first found and reported during winter 2011. She was originally banded as an adult female in August 2002 on Akimiski Island, Nunavut. We used to see a whole flock of birds from this James Bay island in the winter around here, but she appears to be the only one left. Another 400+ geese were in another field at Rotunda and Schaefer, with more at the Ford Rouge Plant. This was the second-highest total of geese we've had on the count since 1999. 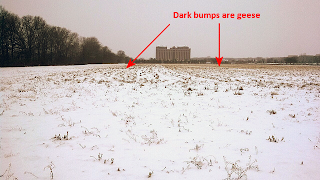 Besides the geese, not much in these fields. Our numbers of small songbirds, especially Dark-eyed Junco, House Finch, American Goldfinch, and House Sparrow are at or near record lows due to the lack of seeds in these field. We also usually have a wintering flock of blackbirds in these fields, and this is only the second count since 2003 we have not had any Red-winged Blackbirds.

Although I have not received any recent reports of wintering Peregrine Falcons in this area this season, we did have one fly from the Ford building north across this field in the morning.

The flat-line crow numbers continue, with only a single American Crow counted. We have not counted more than 18 crows on any count day since the West Nile virus hit the area in 2002.

American Robins furnished an interesting story, with a total of 653 being our second highest total in 20 years. As noted in my post regarding our fall banding season, the fruit crop was phenomenal this year, after a near-failure last year due to drought. Robins took full advantage of this and were found feasting on non-native Common Buckthorn and ornamental crabapples in various places throughout the city. In previous counts, about 56% of the robins on average are found on campus, where there they have primarily fed on buckthorn. This year, nearly all of the buckthorn and other non-native fruiting plants have been eradicated in the campus natural area, leaving robins and other fruit-eating birds to forage elsewhere. Only 6% of the robins on this count were found on campus. The only other year when the percentage was below 33% was last year when the drought wiped out the fruit crop; 8% of robins on that count were on campus.

In this region, there are not a huge number native plants with fruit suitable for songbirds that are available in winter. Climbing/Prairie Rose (Rosa setigera), American Bittersweet (Celastrus scandens), and Eastern Red-cedar (Juniperus viriginiana) come to mind. For better or worse, if it were not for generations of widespread planting of non-native fruiting plants, we probably would not have as many overwintering robins.

Oddly enough, we have never had Purple Finch on the count until this year. This is not an uncommon species, but we mainly see them here in fall migration, and they are gone by count day. Rick Simek found this one the previous week on campus, and was able to relocate it for a new count day species. This brings the cumulative number of species to 87 for the Dearborn portion of the count.

We ended the day with 48 pecies, which is two above average.