Birds with abberant plumage are one of the more common oddities we see at the Rouge River Bird Observatory. Abnormally-colored feathers are fairly frequent, and some examples are below. One example has its own page: a stunning white-breasted American Robin.

Plumage that is abnormally white

An an abnormal reduction in the deposition of pigment in the feathers is known as leucism. Some leucistic birds appear entirely washed out or pale if the reduction of pigment is roughly equal in all feathers (some authors now call this “hypomelanism”). More often, pigment is absent in only some feathers, and this is known as pied leucism, or “partial amelanism.” Causes include genetics, or injury, disease, or malnutrition. 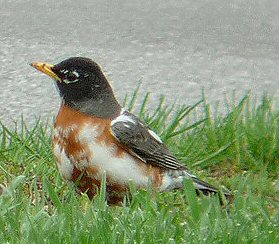 Once or twice a year, we see an American Robin (Turdus migratorius) that has several white feathers or patches of white feathers. This one was photographed by Darrin O'Brien on 29 Apr 2009 at a Dearborn office complex. 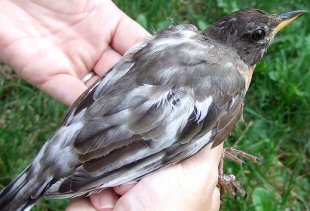 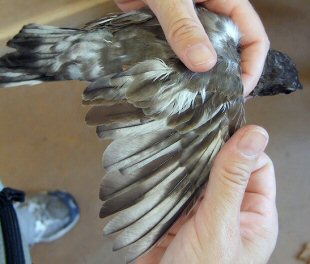 This unusual American Robin was banded on 7 Oct 2007. It was an adult female undergoing its fall molt. The breast feathers were normal. However, nearly all of the incoming feathers on the wings, tail, and body that are gray in normal robins were full or partially "frosty" looking. Typically when abnormal white feathers are seen on birds, the entire feather is white, as in the first example. Partially white feathers like this are something RRBO encounters only rarely, and not to the extent found on this bird. The bird was re-sighted the following week. 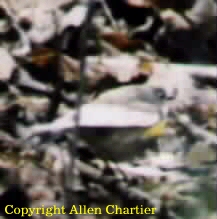 A leucistic Yellow-rumped "Myrtle" Warbler (Dendroica coronata) was found at the on campus from 15 to 17 May 1997. The wings and tail of this bird were entirely white. Soft yellow was visible where most yellow-rumps have bold yellow on the flanks. The back and head were pale gray, and some pale gray streaking replaced the prominent streaking of normal-plumaged yellow-rumps. This bird appeared to be a male. While relatively common in some families of birds, abnormally pigmented individuals are rare in the Parulidae (wood warblers). This sighting was documented in the following paper: Craves, J. A. 1997. Extreme leucism in a Yellow-rumped Warbler (Dendroica coronata coronata). Michigan Birds and Natural History 4:199-200.


Plumage that is abnormally orange

Carotenoids are the pigments responsible for most of the red and yellow colors in birds. They cannot be created by birds without dietary input. Thus, the pigments in what birds eat can influence the color of their feathers. If a bird consumes particular deep red pigments while feathers are in active growth and also has yellow plumage, some or all of the yellow feathers may turn out to be orange. This is most frequently seen in the terminal tail bands of Cedar Waxwings (Bombycilla cedrorum), which are normally yellow. About 5% of the Cedar Waxwings banded by RRBO have had orange terminal tail bands (right). It was first noticed in the 1960s, and it has since been confirmed that it is due to waxwings consuming the fruit of introduced Morrow's Honeysuckle (Lonicera morrowii), which contains a red pigment called rhodoxanthin. This honeysuckle is common at UM-Dearborn.

Occasionally we have encountered Northern Cardinals (Cardinalis cardinalis) that are very vividly colored or with some orange plumage. The male on the right was banded by RRBO on 25 October 2000. It had patches of orange feathers, and several wing feathers that were orange. This abnormality may have been caused by a lack of some sort of dietary pigment that left the normally red feathers less intensely red. Dietary deficiency of certain carotenoids is responsible for orange- or yellow-colored House Finches (Carpodacus mexicanus). Perhaps some lack in the diet combined with ingestion of a red pigment like rhodoxanthin that contributed to the orange color as well as the crimson color of the red plumage.  Other orange cardinals have turned up in the literature and on the Internet, beginning in the late 1990s, lending some credence to the role of honeysuckles and rhodoxanthin in this plumage variation.

And now, a white/pink cardinal! Ohio Birds and Biodiversity.

The yellow cardinal lives on. Ohio Birds and Biodiversity.


RRBO has banded a half-dozen Ruby-crowned Kinglets (Regulus calendula) with at least some orange crown feathers rather than salmon red, all since the year 2000. Examples of two individuals are shown below. This may also be due to a dietary deficiency.

When birds have plumage with excess pigment, usually the dark melanin pigments, they are known as melanistic. This Mourning Dove (Zenaida macroura) was seen in the Dearborn yard of Julie Craves and Darrin O'Brien on 8 Apr 2006. The second photo shows it compared to a normally-colored Mourning Dove.

The first secondary feather on one wing of this American Goldfinch (Spinus tristus), banded 20 Aug 2010 was completely black on the underside, rather than having a white base. When melanism occurs, it seems that it typically affects all feathers. RRBO has not documented a single melanistic feather or patches of melanistic feathers on any birds, much less the thousands of goldfinches banded on campus. 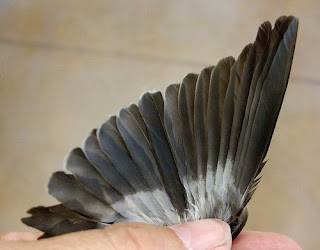 On several occasions, the Rouge River Bird Observatory has banded a bird that had an unusual tail. 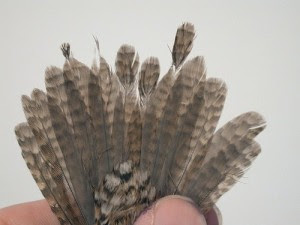 The first was a young House Wren (Troglodytes aedon) banded on 1 Oct 2003. The tips of 5 tail feathers (rectrices, or “rects”) had unusual, spatulate tips which extended about 5 mm past the “normal” ends of the feathers. 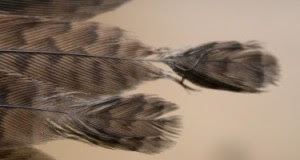 The extensions did not appear to be formed by the wearing away of some of the feather barbs. This was the first time RRBO had ever seen a bird with a tail like this. 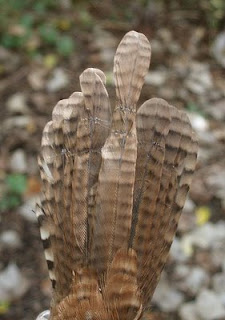 On 25 Aug 2008, a young Carolina Wren (Thryothorus ludovicianus) was captured that had a similar tail. This bird only had the odd paddle-like extension on the central tail feather. We recaptured this bird several times that season, and this feather was present each time. 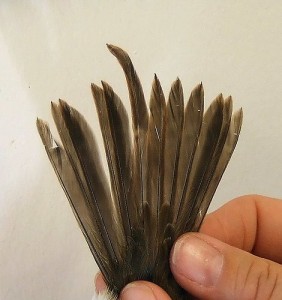 On 5 October 2008, we banded a White-throated Sparrow (Zonotrichia albicollis). One central tail feather was around 10 mm longer than the other feathers. All the rects were fully grown in, so it wasn’t a case of the other feathers having not reached their full length. 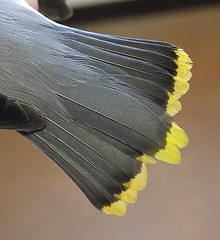 Finally, there was the recent capture of a similar case. This adult Cedar Waxwing (Bombycilla cedrorum) also had two extra-long central tail feathers. As with the White-throated Sparrow above, all the feathers were fully grown. It was banded on 8 November 2011.