An update on Ember

My last post described how we found the identity of the Peregrine Falcon hanging around at the Fairlane Plaza South building at Hubbard Drive and Southfield. From her unique combination of leg bands, we determined that this bird's name is Ember, a female Peregrine hatched in April 2010 in a nest box on a smokestack at the Louisville Gas and Electric (LG&E) Mill Creek Generating Station, a coal-fired power plant along the Ohio River just south of Louisville, Kentucky.

I ended up hearing from Kate Heyden, an avian biologist with the Kentucky Department of Fish and Wildlife Resources. She handles the Peregrine monitoring in the state, and was the person who banded Ember as a nestling! Here is Ember being banded on 5 May 2010. Photo courtesy
Kentucky Department of Fish and Wildlife Resources. 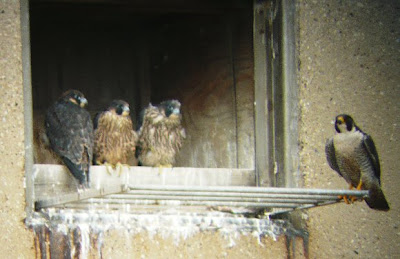 Here she is with two of her siblings (I'm not sure which one of the three is her), along with the female parent on the right, about a week later at the nest site. Amazing how quickly they mature -- the chicks now have much of their white down replaced by adult-looking feathers. Photo courtesy Kentucky Department of Fish and Wildlife Resources.
My last report of a sighting of Ember was on 8 December, but it's likely she is still around. I also had a report from someone else in the building that they believe they saw a bird with different colored bands, so another Peregrine may be present. Stay tuned!
Posted by Julie Craves 1 comment:
Email ThisBlogThis!Share to TwitterShare to FacebookShare to Pinterest
Labels: Birds and bird surveys
Newer Posts Older Posts Home
Subscribe to: Posts (Atom)