The Detroit River Michigan-Ontario Christmas Bird Count was held, as it is each year, on January 1. This was the 34th year for the count, which is centered at I-94 and Warren Ave, and the 17th year that RRBO has coordinated the field work in the city of Dearborn. Our expectations were kind of modest. Temperatures had been mostly below freezing much of December, until a few days before the count. A lot of the Rouge River was frozen, and much of the Detroit River was also frozen, or flowing slush ice. This resulted in most gulls and waterfowl moving out of Dearborn. New Year's Eve was warm and it rained much of the night, continuing periodically in the morning on count day, followed by wind and falling temperatures. The number of hours in the field was diminished by both these conditions and the fact that both Michigan State and U of M were in bowl games, causing some early attrition among observers. In spite of this, 45 species were found in Dearborn, only slightly off the average of 47. For the first year, Ring-billed Gulls were missed in the city. However, we had high counts for Red-breasted Nuthatch (10) and White-breasted Nuthatch (36). Ember the Peregrine was found by my husband and I on one of her usual perches at Fairlane Plaza in the morning, and I later saw her on top of Ford World Headquarters. Our territory includes counting the bird in the various plantings on Ford properties. For some years, they were all sunflowers and attracted many thousands of birds. The last couple of years only one field has been entirely sunflowers, some have been wildflowers (but mowed in fall) and others were cropped in timothy hay and once harvested left barren. This year the wildflowers weren't mowed and the hay fields had sunflowers around the borders, although the cover crop was of no interest to birds. The best field was the sunflowers around the world headquarters: 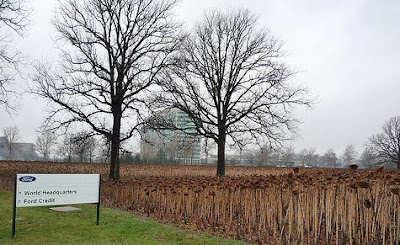 That's the headquarters building in the background between the trees. Although blackbirds has really worked these sunflowers over in the fall, there were still seeds in the centers of the heads. Over 100 Red-winged Blackbirds and a couple of Brown-headed Cowbirds were present, along with hoards of finches and other seed-eaters. It takes a few hours to get accurate counts on the thousands of birds moving in and out of the crop and a brushy line of trees in the middle. We also usually walk the concrete channel of the Rouge River. My husband Darrin O'Brien covered it this year. Here is another shot of the Ford headquarters, this time from a mile or so away along the channel: 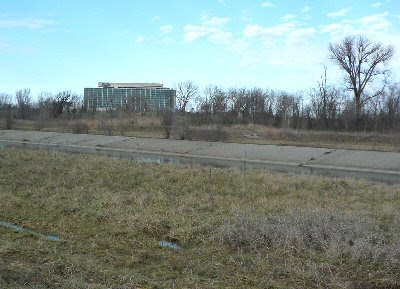 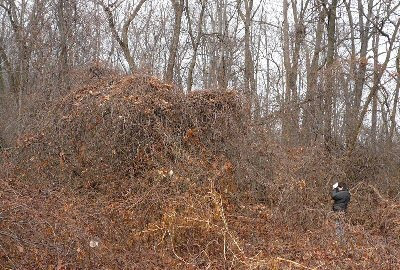 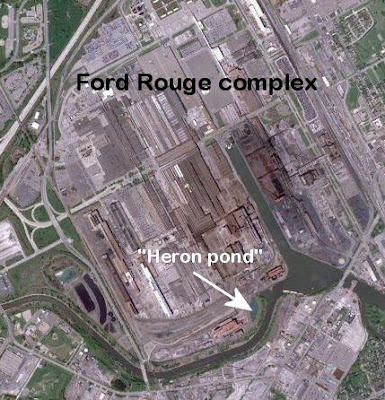 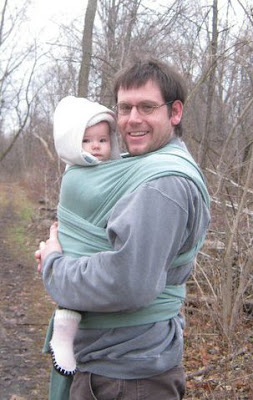