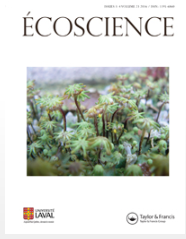 This paper describes the interactions between native birds, a specialist moth, and the moth’s new host in North America, Amur honeysuckle, a problematic non-native shrub.

On a bird survey in late fall 2015, I came across a small flock of chickadees that appeared to be finding food on the leaves of Amur honeysuckle along the Rouge River. This non-native shrub dominates the forest understory in this area, as it does over a large swath of North America east of the Great Plains. The feeding behavior was very interesting to me, as Amur honeysuckle is known to be largely free of insect herbivores, even more so than the other species of non-native honeysuckles that are so common in urban forests.

A closer look revealed that nearly every Amur honeysuckle had leaves that were heavily infested with leaf mines, and that the chickadees were opening these mines and feeding on the insects within them. This was even more intriguing! Because they live and feed within plant tissues, leaf mining insects tend to be very host-specific, and specialized insects like this were supposed to be especially rare on most introduced plants, Amur honeysuckle included.

I reared the tiny caterpillars, overwintered them, and had the emerging insects (which were moths) identified by DNA barcoding in 2016. I continued my observations on bird use of the moth larvae, the extent of the infestation, and population status in 2016. My paper details these findings, which are novel in several ways:
In the paper I also discuss the ecological implications of these interactions. I am continuing to make field observations on bird predation, and am raising moths to see which other local hosts in the same plant family they might use. One interesting fact about these moths is that they are all female. This method of asexual reproduction is not particularly common in butterflies and moths, and is not only handy for me (to raise them, I don't have to worry about pairing them off), but also means a single female can be a founder of a large population. I'm also working with a Canadian researcher on identifying the parasitoid community -- the many tiny wasps that lay eggs in the larvae within the mines; there have been four species identified so far. At least one more paper is in the works.

This link will take you to the abstract of the paper. If you'd like to read the full paper, please contact me by using the form in the footer.

Many other papers can be downloaded at my Researchgate profile.
Posted by Julie Craves No comments:
Email ThisBlogThis!Share to TwitterShare to FacebookShare to Pinterest
Labels: Research news
Newer Posts Older Posts Home
Subscribe to: Posts (Atom)