The 25th year of RRBO's Winter Bird Population Survey was completed in February.

It was another mild winter. It began rather snowy with temperatures close to average, but January and February saw less snow and temperatures well above normal. Surveys were conducted on 16 days (previous mean 14) with 26.5 hours total (mean is 27.7). For the third year, I was unable to survey anywhere along the Rouge River from Fair Lane Estate south due to it being fenced off for riverbank restoration.

A total of 41 species was two above the previous 24-year mean. Two new species for the survey were recorded: Field Sparrow and the female Pileated Woodpecker that has been present on campus since fall. These bring the cumulative total for the survey to 79 species.

Fruit-eating birds were scarce again. Robins were in low numbers. No Hermit Thrushes, Cedar Waxwings, or Yellow-rumped Warblers were recorded. These latter 3 species have become more and more scarce the last 5 or so years. Because they typically occur in fairly low numbers, I have not yet worked with their data. But the trends with robins might shed some light (see below).

Now that we are at the 25 year mark, I thought I would provide a little summary data and analysis.

Population trends take a little more time to work through, so I just did some quick calculations on common species to see if anything popped out. Not much obvious was apparent for most species using the limited analysis* performed. Perhaps the most interesting were the trends for the two most abundant fruit eaters, American Robin and European Starling. 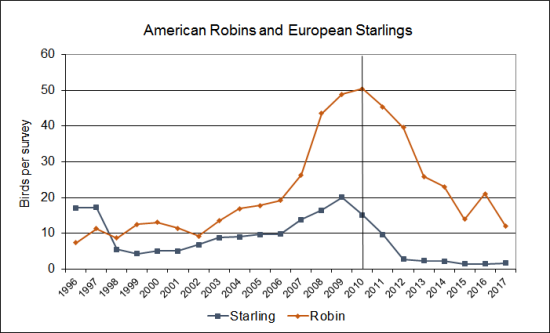 Both species for many years were more or less stable, with increases starting around ten years ago. I suspect this would correlate with increasing average winter temperatures and decreasing snow cover, but I have not yet incorporated weather data into my analyses. Around 2010 (vertical line on graph) both species being to show declines. This was approximately the time when large-scale removal of invasive fruiting tree and shrubs began, which both bird species heavily utilize in winter. This may indicate a pitfall of removing an important food source without concurrent restoration. Indeed, an examination of robin fecal samples from 2009 through 2017 shows a 52% decrease in the proportion of samples containing non-native Common Buckthorn (Rhamnus cathartica) seeds, the first primary target of the eradication effort. A closer look at the fecal samples reveals another unfortunate result of removing a food source without replacing it with something more desirable. 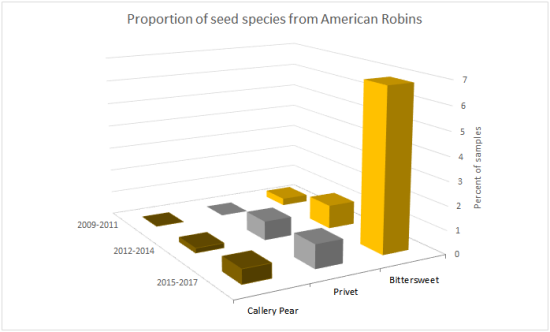 Non-native Callery or Bradford Pear (Pyrus calleryana) and Border Privet (Ligustrum obtusifolium) have become naturalized on campus. Their seeds did not appear in fecal samples until 2013, but have been increasing every year since. These species are generally not favored by birds -- pear fruits are fairly large and mealy, while privets are dry and have large seeds and little pulp. These percentages are modest, but bear in mind that the vast majority of plant species are found in less than 3% of samples; samples are dominated by buckthorn, non-native crabapples, and non-native honeysuckles. The third species in the chart is non-native Oriental Bittersweet (Celastrus orbiculatus). While there is some native American Bittersweet (Celastrus scandens) here, Oriental Bittersweet is far more common. Birds seem to favor Oriental Bittersweet, perhaps because it has slightly smaller fruit and smaller seeds. Seeds of bittersweet have have greatly increased. Robins, at least, appear to be turning to alternative fruits, those that are less desirable or not as common as what has been removed. This creates an undesirable feedback loop: increased consumption will also lead to increased dispersal of these species.

One other bird species appeared to respond to the habitat changes that started in 2010. 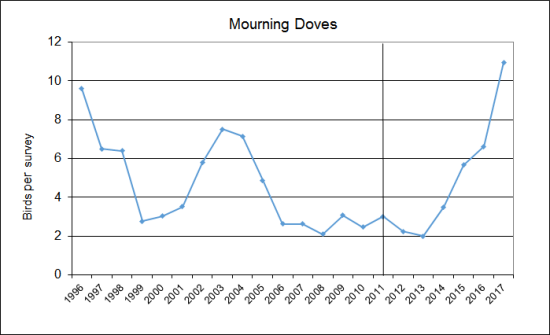 Mourning Doves may be increasing due to the substantial clearing of the understory.

Over the past 25 years, two other events had an influence on bird population. One was the arrival of West Nile Virus in 2001 (vertical line in graph below). I have shown the dramatic decline in American Crows before, and they have yet to recover. 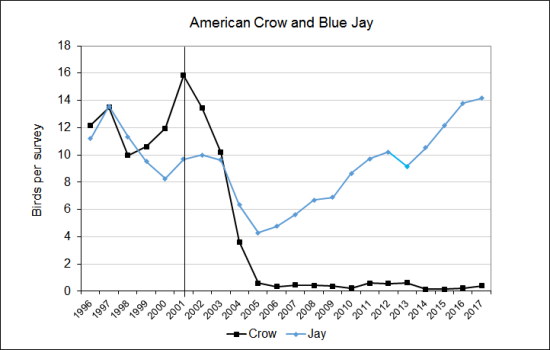 Blue Jays are related and also known to have been impacted by the virus. Their populations appear to have rebounded nicely.

Finally, the Emerald Ash Borer was detected here around 2002, and all our ash trees died within a few years. 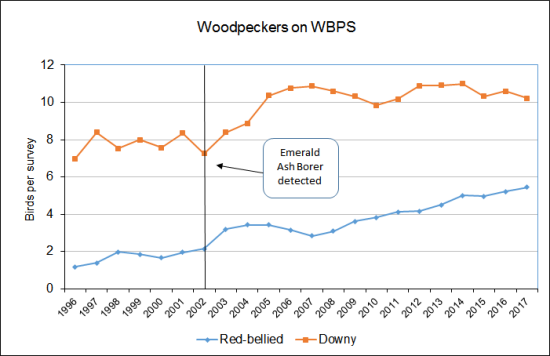 While the modest increases might be due to extra food for woodpeckers in dead and dying trees, I don't think the data here indicate that the beetles had much of an effect on woodpecker populations. It might be due to methodology, but since "housing" is often the limiting factor for cavity nesters and the ash trees tended to fall over shortly after death and therefore did not supply more cavities, I think the overall impact on woodpecker numbers was modest.

*Notes on methods: I looked at species seen every year that had an average of 5 or more individuals seen per survey day; I excluded waterfowl and added American Crow and Red-bellied Woodpecker. I used birds per survey day rather than raw numbers or hours because for most species that provided the strongest correlation. To smooth out data I used a 3-year moving average, which is why the graphs begin in 1996 rather than 1993. When I work on a full analysis, I will be more thorough and provide more details on methods, but for the purposes of this post, these methods should suffice.
Posted by Julie Craves No comments:
Email ThisBlogThis!Share to TwitterShare to FacebookShare to Pinterest
Labels: Birds and bird surveys
Newer Posts Older Posts Home
Subscribe to: Posts (Atom)