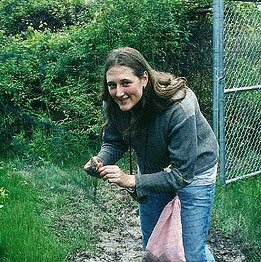 Julie and I have kept in touch throughout her academic career, and it has always been exciting to see her accomplishments accumulate. She has published a number of papers, and her most recent one -- Avian conservation practices strengthen ecosystem services in California vineyards -- was featured in the New York Times!

I like to think that RRBO had a small part in her success. But I know it is because Julie is a dedicated, creative scientist. Way to go, Julie!
Posted by Julie Craves No comments:
Email ThisBlogThis!Share to TwitterShare to FacebookShare to Pinterest
Labels: Misc. news

Our official fall banding season ended on 8 November. I had really hoped to squeeze in a few more days, but the wind or rain prevented me from doing so. I have posted a full summary with photos and stats on the RRBO web site.

Because we had a number of nets that were damaged by deer, instead of trashing them I moved them all into one area and decided to leave them up a little longer. As we have some warm days in November and December, I hope to catch a few more robins (and maybe even a wintering Hermit Thrush) to see what fruit they continue to eat as winter sets in.

As we identify and compile our seed samples from this fall and add them to our database, expect to see a blog post or two on what we have found our birds to be eating. Plus, a couple of exciting projects are being to come together, and of course our winter bird survey is also fast approaching. Stay tuned.
Posted by Julie Craves No comments:
Email ThisBlogThis!Share to TwitterShare to FacebookShare to Pinterest
Labels: Banding

[This post is in response to local interest in the effects of buckthorn fruit on the birds that eat it.] 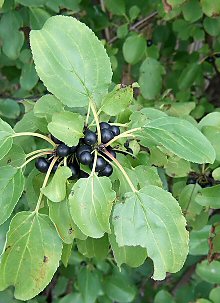 For the last 5 or 6 years, my research has focused on the use of fruit by birds in the fall, especially non-native fruit and migratory birds. One of the most abundant fruiting shrubs in my southeast Michigan study area is Common Buckthorn (Rhamnus cathartica), an invasive fruiting tree not native to North America.

Before I continue, let me issue this statement: I strongly believe in the use and preservation of native plants. I am not "pro-buckthorn." I believe it has many ecological liabilities. One prevailing notion is that buckthorn causes diarrhea in birds and is harmful to them. Based on a peer-reviewed literature search, I cannot find evidence that this is true.

Much of the background information here is from an excellent overview paper by Izhaki (2002). Other research is also cited.

Many plants have what are known as "secondary compounds," chemicals that play important roles in plant fitness and survival. These compounds or metabolites are generally believed to deter the consumption of unripe fruit, since the seeds in unripe fruit are not yet viable. See Cipollini and Levey (1997) for a discussion of other very interesting hypothetical functions of secondary compounds in ripe fruit.

The relevant secondary compound in buckthorns is emodin, a free-form (aglycone) anthraquinone found in 17 families, 28 genera, and 94 species of plants, including 23 species in the genus Rhamnus*. It can be found in many plant parts, including the leaves and fruit. Emodin has many properties. In regards to fruit, emodin can act as an antimicrobial, inhibiting fruit damage. Levels of emodin in fruit pulp typically decrease as the fruit ripens. As explained above, this may help to protect the seeds from being dispersed before they are mature, or eaten and destroyed by seed predators.

The biological activity of emodin (as well as many other compounds) is different in mammals than in birds. Emodin is well-known as a laxative in humans as well as other mammals. What about birds?

Wherever it occurs, buckthorn tends to be distributed by birds. There are two commonly held and frequently repeated notions about buckthorn fruit: that it causes diarrhea in birds, and that birds in North America don't "know" not to eat unripe fruit and can become very sick or even die from eating it. (Actually, there is a third notion, that buckthorn fruit is "junk food." That isn't entirely true either, but it a subject of a future post.)

The diarrhea myth, I think, starts with the fact that when people see birds eating fruit, they also see the birds poop a lot. This is, in fact, true of most birds and most types of fruit, especially wet, pulpy fruit and fruit with bulky seeds. Fruit passes quickly through bird guts -- many fruits are composed of mainly water and seeds, and nutrients (especially sugars) that are quickly assimilated. Birds only have so much room in the digestive system and it makes sense for them to process fruit as quickly as possible, including jettisoning the seeds. Birds are also able to consume more fruit if they choose species that have short retention times (Cipollini and Levey 1997). Hence, the appearance of diarrhea. I suppose if you define diarrhea as loose, wet, and frequent defecation, then many fruits give birds "diarrhea." But the implication in public discussions is that the frequent, conspicuous defectations of buckthorn pulp is abnormal or harmful. I've seen similar messes near large stands of Pokeweed (Phytolacca americana) and Red Mulberry (Morus rubra), both native plants, and do not hear similar concern for birds' health.

Studies of secondary compounds in fruits (e.g., Wahaj et al. 1998) have indicated that plants exert "control" over the gut retention time of their seeds in birds through these chemicals; this includes both speeding up and/or slowing down of the passage through the digestive system.  This is presumably to influence the number of seeds expelled per defecation, the dispersal distance, and/or reduce or enhance the effects of gut passage on the seed coat. This control is advantageous to the plant if it increases its reproductive success.

Regarding emodin, Tsahar et al. (2003), working with Yellow-vented [White-spectacled] Bulbuls (Pycnonotus xanthopygos), found that emodin increased digestive efficiency in birds, aiding in the processing of dry matter, nitrogen, and other nutrients. They determined that this effect was the result of emodin slowing transit time of food through the gut. This study, then, found that emodin has a costive (constipating) effect, not a laxative one, at least in bulbuls.

Despite the widespread detrimental effect of emodin on fruit consumption by vertebrates, ripe fruits that contain emodin are frequently consumed by a wide variety of seed dispersers... suggesting that the net benefits of fruit consumption somehow outweigh the negative effects of emodin. In particular, the nutritional reward of carbohydrates, lipids, and proteins in fruit pulp can be viewed as more important to consumers than the presence of co-occurring secondary compounds.

Do North American birds unwittingly eat unripe non-native buckthorn fruit, which contain higher concentrations of emodin than ripe fruit? Could they consume enough to harm them?

There are at least 14 native species of Rhamnus and Frangula in North America. Several species are widespread, and have similar fruit characteristics (phenology, size, color) as the non-native species. Given the widespread occurrence of emodin in this family, presumably it also occurs in the fruit of the native species. This indicates that North American birds are not naïve to buckthorn or emodin.

Even if they had no experience with fruits containing emodin, studies have shown that many bird species are sensitive to it and adjust their consumption accordingly. Tsahar et al. (2002) found the highly frugivorous Yellow-vented Bulbul could distinguish among artificial diets containing a range of emodin concentrations similar to what is found in ripe fruits, while House Sparrows could only discern emodin amounts similar to what is found in ripe versus unripe fruits.

Both of those bird species are Old World in origin. One of the only studies to take a long look at R. cathartica and North American birds was a doctoral dissertation by James Sherburne (1972). He found American Robins avoided feeding on fruits of other plants coated with emodin, and that even if starved for 12 hours, would only voluntarily eat a few unripe R. cathartica fruits. The unripe fruit contained between 0.6 to 1 microgram of emodin.

Sherburne went on to force American Robins and Gray Catbirds eat unripe Rhamnus fruit or capsules containing emodin. The birds showed signs of diarrhea after consuming 50 micrograms to 5 mg of emodin. At the lowest concentration showing effect (50 micrograms) and the highest concentration given for the unripe fruit (1 microgram), it would require ingestion of at least 50 unripe fruits to cause diarrhea.

Schafer et al. (1983) tested the toxicity of a wide range of compounds on birds, including emodin. The dose of emodin needed to kill half (LD50) of Red-winged Blackbirds and European Starlings was greater than 100 mg per kg of body mass. Under this scenario, an average-sized 65-gram male blackbird would need to consume at least 6500 unripe fruits of R. cathartica (based on the high estimate of 1 microgram of emodin in an unripe fruit from Sherburne) to reach the "LD50" dose. Little wonder the authors calculated a "hazard index" indicating little or no potential for emodin to cause acute poisoning in these species.

Given the ability of birds to detect emodin, their reluctance to eat unripe fruit (three other studies cited in Izhaki [2002] noted that in North America, "most bird species do not consume the unripe fruits"), and the high levels needed to create a negative response, we can probably infer that wild birds do not consume large enough quantities of unripe fruit to cause diarrhea or serious toxicity.

As for ripe fruit, Sherburne found no emodin in ripe fruits of R. cathartica, although other studies have found it in the ripe fruit of other Rhamnus species not yet established in North America (Tsahar et al. 2002). As it is found in far smaller amounts in ripe fruit, the number of fruits that would need to be consumed to cause harm would be many times greater than the examples listed above. Sherburne reported on 11 species of birds that readily ate ripe R. cathartica fruit, but did not mention any negative effects (in Knight et al. 2007).

In the wild, birds tend to mix their diets, choosing fruits and other foods within short feeding bouts, and this may be an attempt to balance nutrient intake or to avoid ingesting too much of a particular secondary compound (Cipollini and Levey 1997) . Further, the varied dietary inputs may contain their own qualities that could mediate any adverse physiological effects of emodin.

There are many ecological crimes we can pin on buckthorn. It doesn't appear that causing harmful diarrhea is one of them. If anybody has seen any other studies or peer-reviewed publications that do show that eating buckthorn fruit is harmful to birds, please post them in the comments. I am fascinated by this topic and interested in learning of new research.


-----
*Glossy Buckthorn, Frangula alnus, has often been included in the genus Rhamnus as R. frangula. It also contains emodin. When I refer to "buckthorn" here, I am referring to both Common and Glossy Buckthorn in general, unless otherwise noted.

Sherburne, J. A. 1972. Effects of seasonal changes in the abundance and chemistry of the fleshy fruits of northeastern woody shrubs on patterns of exploitation by frugivorous birds. Ph.D. dissertation, Cornell University, Ithaca, New York.