How to help baby birds

The calls have already started. "I found a baby bird. What should I do?"

The answer is nearly always: leave it alone.

The vast majority of these birds are not orphans. Invariably, the ones that are "rescued" by well-meaning people end up dying because the folks that bring them home are like the proverbial dog that caught the bumper. Once they catch it, they have no idea what to do with it.

It is perfectly normal for a baby bird to leave the nest before it can fly. Baby birds grow rapidly, with many species leaving their crowded nests inside of two weeks. They are awkward, not fully feathered, and cannot fly.

American Robins, for example, can't fly when they leave the nest and are often found bumbling around, apparently alone and helpless. However, even if they are on the ground, their parents are most likely tending to them. The parents may be off finding food, or just in hiding because they are more wary of you than the young ones are.

If the baby is in immediate danger of being stepped on, run over, etc., you can move it a short distance. It isn't true that the parents will abandon it if it has been touched by a human. Do not chase the baby bird all around trying to catch it. The stress can kill it. If it can evade you, it can likely evade a predator.

Sometimes a nest gets blown down in a storm. You can reconstruct a nest in a container with drainage (like a berry basket) and securely fasten it near the original site. Do not try to raise the young yourself, it is not only difficult, in the U.S., it is illegal to possess a native bird.

If the bird you find is truly abandoned, it may be that by the time you find it, it is already too late, especially if it is a very young, naked baby bird. If you must take in a baby bird --

The species you are likely to encounter are common, prolific, adaptable, and will have more than one brood of youngsters a year. Loss of eggs, nestlings, or fledglings is normal for all bird species and built into "the system."

A huge percentage of the calls I receive are for House Sparrows, European Starlings, or Rock Pigeons -- none of these are native to North America. It does not make ecological sense to spend time and resources "saving" these species, which are already overabundant. They are not protected under law by the Migratory Bird Treaty Act, and it may be/become illegal for these species to be rehabilitated and released into the wild.

It is not easy for many people to "let nature take its course," but it is nearly always the right thing to do.

Download RRBO's brochure on what to do if you find a baby bird (PDF).

How to bird UM-Dearborn

Sometimes when I report results of my bird surveys (especially when they represent high species diversity or some "good" birds) people write to tell me they visited the UM-Dearborn campus the same day and "didn't see anything." I've even had the occasional email where the author says that they "never see anything" at UM-D! I hope this actually translates to, "I didn't see what/as much as you saw." In any event, here are some tips to increase your chances of seeing lots of good birds at UM-D...many of which apply to any place you bird.

Where I go
I described in a previous post where I bird here in the campus environmental study area. You can see my route(s) on a Google map at EveryTrail. I always walk the 1.5-mile standard route. Sometimes I also walk the trails on the floodplain, go down to the Henry Ford Estate, or walk all the way to the south end of campus. Generally, however, most of the birds are found on the standard route. 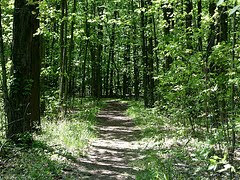 Some good spots
Areas in the morning where the sun is hitting the trees are usually the best places to find pockets of migrant birds here. Good spots that are reliable are right along Fair Lane Drive, which divides the campus from the environmental study area, between the Academic Support Center and the old Pony Barn (see this campus map), and another is along the sunny edges of the Hickory Meadow (see this PDF map of the environmental study area). The trail head right behind the Environmental Interpretive Center (EIC on either map) is good, too. A little later, when the sun is up higher, the Lakeside trail can be excellent.

When to bird
I start my surveys right around dawn for two main reasons. First, migrant birds are most active when they first arrive after a night of migration (most songbirds are nocturnal migrants). When they arrive at a site their first order of business is to settle into appropriate habitat and feed. During mid-day many birds rest. I find that this drop-off in activity begins around 11 AM or so here (depending on the time of sunrise), and it can be dramatic.

Secondly, the trails at UM-Dearborn are heavily used by students, school groups, and the public. Often programs begin at 8 or 9 AM. Once a lot of people hit the trails, the birds tend to move off and out of sight (but please remember to stay on the trails, and that no tape recordings are permitted).

For both these reasons, if you are coming here at lunch time, you are at a big disadvantage.

General tips
Birders in this region are spoiled by the close proximity of two famous locations that concentrate birds: Point Pelee and Magee Marsh/Crane Creek. The geography of each of these areas means that a lot of birds congregate in fairly small areas. This can make for excellent viewing without a huge amount of effort. These places also attract a lot of birders who can point you to the exact spot where you can see Species X or Bird Y. It's not quite the same at UM-Dearborn, and you'll have to work a little harder for your birds. Personally, I enjoy the challenge, and love the thrill of discovering the first spring arrivals or those unexpected rarities on my own. I hope these tips help you to do the same. Don't forget to let me know what you see -- I'm sure it will be something!
Posted by Julie Craves No comments:
Email ThisBlogThis!Share to TwitterShare to FacebookShare to Pinterest
Labels: Birds and bird surveys
Newer Posts Older Posts Home
Subscribe to: Posts (Atom)