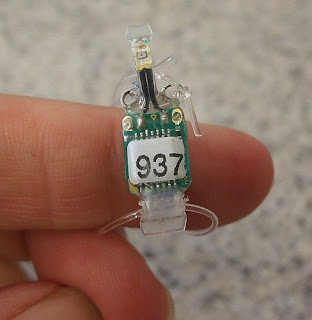 Geolocators are tiny devices that measure light levels for up to two years. This data can be used to calculate latitude and longitude when compared with sunrise and sunset times and light levels at noon in different geographic locations. They are accurate to about 200 km for latitude, with better resolution for longitude.

When mounted on a bird, a geolocator records light intensity data at intervals throughout each day. Retrieved later, the data can be downloaded and migration routes, pace, and destination can be determined. For species with broad breeding and wintering ranges, this can provide important information on exactly where particular breeding populations spend the winter. Given that we have long-term Breeding Bird Survey data indicating that populations of some species are declining in particular regions of North America, figuring out where these birds spend most of the year helps us identify what may be causing their declines, and helps us devise more effective conservation measures.

This fall, RRBO is placing geolocators on a sample of summer resident Gray Catbirds. This project is a joint effort between RRBO and Dr. Melissa Bowlin, who joined the UM-Dearborn faculty late last year and who is a research partner of the Environmental Interpretive Center. Dr. Bowlin's interest is in how physical traits of birds influence their migratory performance. In our catbird study, she will be looking at how the wing shape of individual birds impacts the pace of their migration. The geolocator data will allow us to determine the time it takes for each of the birds to reach their wintering destination, and hopefully where the birds stop each day, so we can calculate the rate of migration for each bird.

RRBO is interested in the approximate route followed by catbirds breeding in this area, as well as where they spend the winter. Previous data from other researchers have indicated that Midwestern catbirds winter in Central America, whereas catbirds Mid-Atlantic nesting catbirds winter in the southern U.S. and the West Indies. This information is based on small sample sizes: recoveries of 17 banded birds and 6 birds with geolocators. Our data will add to this knowledge.

The geolocators are tiny, and are carefully fitted on the birds with a flexible harness that loops around the bird's legs. The total weight of the geolocator plus the harness is less than a gram, or about 2.5% of the weight of an average catbird. The recommendation for any kind of radio transmitter or attachment to a bird is 4% or less. The geolocator rests just above the bird's rump. Dr. Bowlin has done careful studies, published in the journal Methods in Ecology and Evolution, determining the effect of drag and weight of various types and configurations of geolocators, using preserved bird bodies in a wind tunnel. The set-up we are using is the best available configuration to minimize these effects.


Catbirds were chosen for this pilot project because it is not only our most frequently banded long-distance migrant, but also because we recapture a lot of individuals in subsequent years. This is critical because in order to get the data, we have to recapture the bird next year, remove the geolocator, and download the information! Geolocators are typically put on nesting birds, because they have the highest probability of returning to the same site in subsequent years. RRBO banding data has indicated that both adult and young birds (hatching year) captured in early autumn, after hatching year birds have become independent, also have a high return rate. This study will also help us determine if deploying geolocators on hatching year or post-breeding birds is viable. If so, it could help expand the use of these devices by migration banding stations that do not operate during the breeding season. Since we are putting geolocators on both adult and young of the same species from the same population, we hope to also see if age is a factor in the choice of migration route or wintering site.

As you can see, the potential for these little devices to unravel basic life history mysteries is huge. The pioneering study with bird and geolocators was done by Dr. Bridget Stuchbury and published in the journal Science. The study looked at Wood Thrushes and Purple Martins, and is summarized here. Geolocators are being used to study Bicknell's Thrushes, Bobolinks, Red Knots, Ruddy Turnstones, and Golden-crowned Sparrows, among other species.  Much more information on this technology, as well as the importance of what we can discover is available at the web site of the Migratory Connectivity Project.

We plan to offer donors an opportunity to sponsor these catbirds. To be included in our fall campaign, add your name to the RRBO mailing list.
Posted by Julie Craves 2 comments:
Email ThisBlogThis!Share to TwitterShare to FacebookShare to Pinterest
Labels: Banding, Other RRBO projects

Well, things can sure change in a hurry. After probably the dullest first month in 20 years of fall banding came two of the busiest days in RRBO's history. The same stalled low pressure system that was responsible for days of rain and/or wind eased up just enough on Friday, Sep 9 to let us open our nets. Birds that had been pushed west by the weather systems in the prior days were all over the place. We caught 127 birds on Friday morning, and nearly all of them were warblers. It was raining at sunrise on Saturday, but stopped for two hours which allowed us to open nets. It was clear things were still hopping. We closed when it rained, and re-opened again. Although we were not open as long as Friday, we caught 134 birds, again mostly warblers.

Twenty were RTHU, which we released unbanded. Subtracting those and recaptures, 216 were new birds. Thanks to Darrin O'Brien and Dana Wloch, two of my most experienced banders, we worked out a system where birds were fully processed -- measured, aged, sexed, and weighed -- in less than two minutes and we were never away from the nets for more than 40 minutes.

The big story for the week has been Bay-breasted Warblers. Our fall average is just two, and our previous fall season high number is five. We have already banded 26 and seen many others. Tennessee Warblers are more numerous west of here in fall, but we've exceeded our fall average of nine with 11 so so far. These two species (along with Cape May Warbler), are generally thought of as "spruce budworm" warblers, since their populations can be tied with outbreaks of this insect on their nesting grounds.


When there are large pushes of birds due to weather systems, it's hard to attribute inflated numbers to actual increases in populations, but a few other species have more numerous than usual this season overall (not just on the two big days). Blackpoll Warblers are much more common; our fall mean is 23, and we've banded 43 so far. Our current total of ten Black-throated Green Warblers is well above our fall mean of two and high of six. We've netted and released 52 Ruby-throated Hummingbirds. Since they are not marked some may be repeats, but it isn't too unusual to catch three to five in one net. However, the most we've netted in the past was 50, and we usually get them into October.

Things tapered off after those two big days and have more or less returned to normal. I hope to have a post up about one of our special projects within the next week or so.
Posted by Julie Craves No comments:
Email ThisBlogThis!Share to TwitterShare to FacebookShare to Pinterest
Labels: Banding 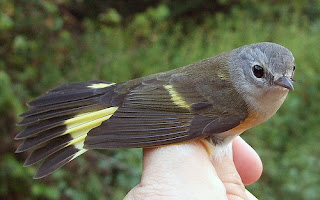 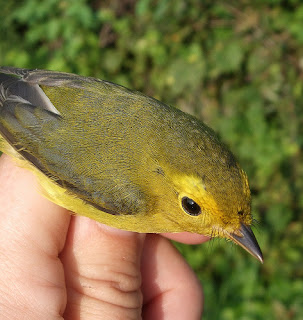 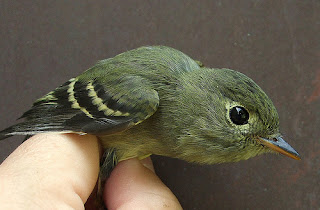 We hope to be able to resume banding over the weekend.
Posted by Julie Craves No comments:
Email ThisBlogThis!Share to TwitterShare to FacebookShare to Pinterest
Labels: Banding
Newer Posts Older Posts Home
Subscribe to: Posts (Atom)