The Detroit River Michigan-Ontario Christmas Bird Count was held, as it is each year, on January 1. This was the 37th year for the count, which is centered at I-94 and Warren Ave, and the 21st year that RRBO has coordinated the field work in the city of Dearborn.

The skies were fair, but the temperatures were cold and windy. This was the first real cold snap of winter after a very mild fall and December. It was cold enough to freeze up a lot of water, but as count day was only a few days into the cold snap, it had not really been cold enough to push a lot of regional waterfowl into the always ice-free areas in our count circle. For example, this was onlly the second year that Canvasback were not counted; in fact, Common Merganser was the only diving duck recorded this year.

Unfortunately, our two counters on campus had unexpected family obligations, resulting in the best remaining habitat in the circle being under-covered. We had the lowest number of party-hours in our history, and raw numbers of many species of common birds were record lows, but not really reflective of actual populations. For these species, the Winter Bird Population Survey will provide more accurate numbers.

The obvious highlight of the count was a Lesser Black-backed Gull, found at the Ford Rouge Plant by Jim Fowler, Mike O'Leary, and Dave Washington, and photographed by Dave. 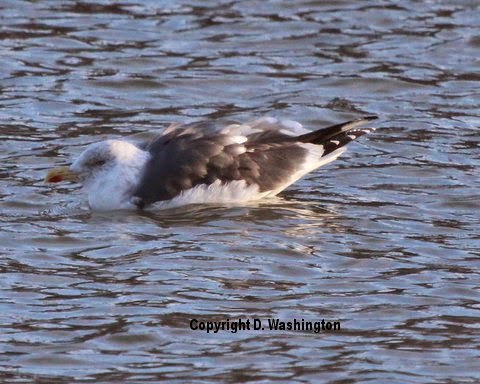 Most years this team is able to get special permission to enter the complex and check out the open water in the boat slip and other areas not visible from outside the plant. This is the third Dearborn record for Lesser Black-backed Gull. The others were also at the plant, in January and December 2004. This brings the cumulative total for the Dearborn portion of the count to 88 species.


The usually-productive Ford "sunflower" fields mostly lacked birds this year. The only one with sunflowers was at Ford World Headquarters, where we did have 48 Red-winged Blackbirds and many House Sparrows and American Goldfinch. However, all the sunflower heads were seedless. The fields at Hubbard and Southfield, usually the best, had been planted in hay and harvested. Not even weed seeds were evident. 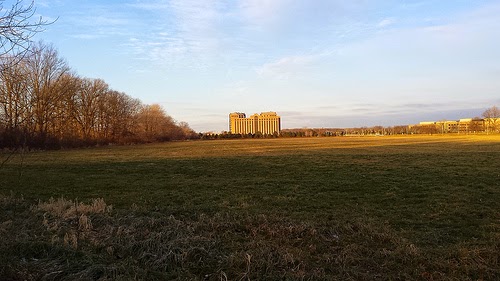 One field had a few rows of sunflowers at the edge, but they were stripped and had no birds. 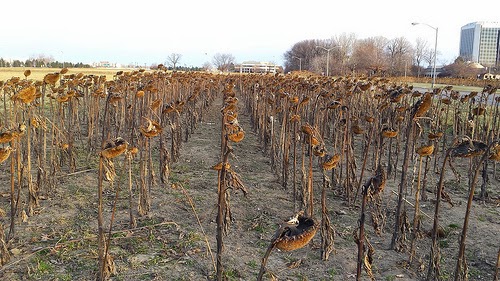 As usual, we had a Peregrine Falcon at the Ford World headquarters and vicinity, and another one heading north up the Rouge River behind Henry Ford College. There have been two reported off and on this winter in the area.

A male Ring-necked Pheasant that we flushed at Porath Park was the first on the count in 11 years. Porath (Kielb) Park is an 11-acre property in a sparse residential area adjacent to railyards and an industrial border of Detroit was once a clay mine for bricks. In the 1940s, fill material from construction of I-94 was added. A federal brownfields grant was used to clean up contamination (still no digging allowed, according to warning signs) and it was turned into a park by the city in 2005. There are a variety of native plants there, but aside from a trail that is mowed through it (although not this year, apparently), the park has not been maintained very well and it's becoming weedy and overgrown. Still, we like to go take a look each year.

Everyone familiar with this count and our winter bird surveys knows that Dearborn has not seen its American Crow population recover since it was decimated by West Nile Virus -- my most recent summary is here. For this count, we've only counted 1-3 the last few years and this year it finally happened: no crows for the first time in the history of the count.

We ended the day with 38 pecies, which is a record low.