It's hard to believe that I have been doing bird surveys at the Humbug Marsh Unit of the Detroit River International Wildlife Refuge for five years. The Refuge was established in 2001 and includes a patchwork of properties along 18 miles of the lower Detroit River. The 410-acre Humbug Marsh unit, straddling Trenton and Gibraltar, was acquired in 2003 after a lengthy battle with developers. It represents the last mile of undeveloped land on the U.S. mainland side of the Detroit River. RRBO's partnership with the U.S. Fish & Wildlife Service and the Refuge began in 2004. Although this area is within the Rockwood Christmas Bird Count (CBC) circle (itself established in 1974), it had never been accessible for bird surveys. Since 2004, RRBO has completed five CBCs at Humbug, as well as two North American Migration Counts, four years of Breeding Bird Atlas work, and two major insect surveys. December 27 was our fifth CBC at Humbug. The day started with very thick fog, making waterfowl counting difficult. Some years, much of the river is frozen and a lot of waterfowl gather in the channel between the mainland and Humbug Island. This water stays open due to the warm discharge from the Trenton Power Plant just upstream. Humbug Island is to the right in the photo below, but the thick fog bank in the center is completely obscuring Grosse Ile.

The day ended up breezy and very balmy, with record-breaking temperatures over 60F. This melted much of the snow we'd had in the previous weeks. In the southern portion of the Refuge, an old road was removed over the summer. In its place: thick muck and deep water-filled ruts covered in sloppy snow and thin ice. We were unable to fully cover this area because we just couldn't walk through it. Still, we had a nice adult male Sharp-shinned Hawk at this spot. 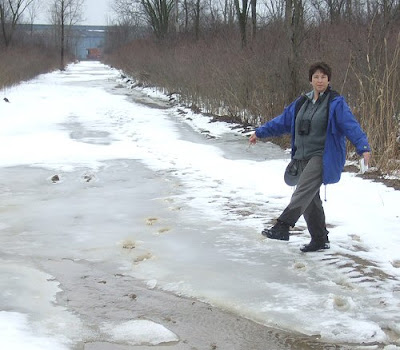 The Humbug Marsh Unit is not yet open to the public. When my husband Darrin O'Brien and I do the CBC there under RRBO's special use permit, we are alone to walk the many acres. There are a few new, formal trails, but usually we just have to follow deer trails or bushwhack. The northernmost part of the property is an old brownfield. It's quite open and in the winter has the fewest birds. Here I am traipsing across the middle of it. 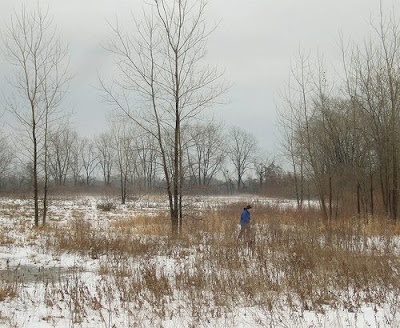 We had 47 species at Humbug for the day. Highlights included two Bald Eagles, a Yellow-bellied Sapsucker, one American Crow (the first on the Humbug count in five years!), three Brown Creepers, one Winter Wren, five Golden-crowned Kinglets, three Hermit Thrushes, an Eastern Towhee, a Purple Finch, and six Rusty Blackbirds. The rusties were also the first we've had there in winter, and we were happy to see them because it is a species in significant decline. We had over 200 American Robins, and over 50 White-throated Sparrows (Humbug is a great site for wintering white-throats). In the midst of it all, I was able to take a short break on one of the new benches along the river. 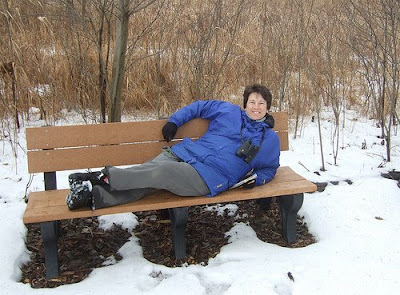 The cumulative species total for the five years is a respectable 74. Only 16 have been seen all five years, in large part due to the variable mix in waterbirds influenced by river conditions. Unusual species have been Gray Catbird in 2005 and Common Yellowthroat in 2007. The species total will undoubtedly grow as habitat is restored and, when the unit is fully open to the public, the number of participants on the count increases. January 1 is the date for the Detroit River CBC, which includes Dearborn. I'll post a report on that count next week!
Posted by Julie Craves No comments:
Email ThisBlogThis!Share to TwitterShare to FacebookShare to Pinterest
Labels: Birds and bird surveys, Other RRBO projects

A tale of strange tails

Bill deformities and tumors are not the only abnormalities noted in the birds we band here at RRBO. Feather color abnormalities are pretty common, but today I'd like to focus on a rarer plumage oddity: weird tails.

The tail feathers of birds, known as "rectrices" or "rects", help with flight, balance, and often sexual display or as a means of signaling and communication. The songbirds we band at RRBO have pretty standard tails -- usually 6 pairs of generally graduated feathers. Every so often, we find an exception.

The tail below belongs to a young (hatching-year, or HY) White-throated Sparrow banded on 5 October 2008. The central rect on the right side was around 10 mm longer than the other feathers. All the rects were fully grown in, so it wasn't a case of the other feathers having not reached their full length. 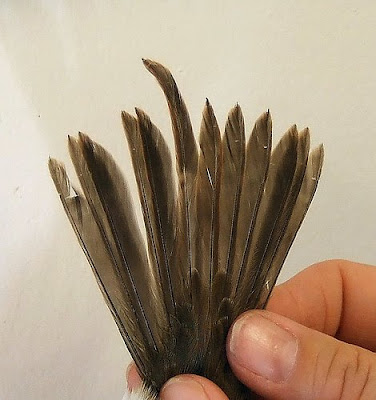 Also this fall, we got this HY Carolina Wren with a funny paddle-like extension on the central rect. We first caught it on 25 August. The extension was apparent, but the bird was still undergoing its fall molt. However, it was recaptured several times, including in early October, when this funky paddle was still there. 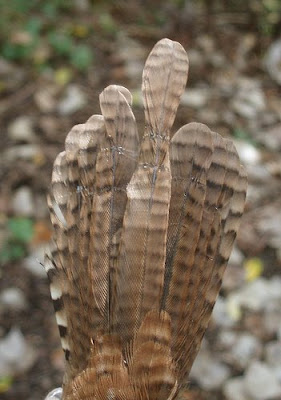 Notice also the odd lines in some of the feathers that look like breaks, or as if the feather was folded. These types of "growth bars" or "fault bars" can occur if feather growth is interrupted, often by a shortage of food due to drought, extended periods of rain, or other environmental conditions. Usually this slow-down of growth creates a fault bar that appears more like a faded line. The Hermit Thrush below has one of these kinds of fault bars, a rather extreme example. In the thrush, the fault bar is an even line across all the feathers. The only time a bird normally grows all its tail feathers simultaneously is as a nestling, so the presence of a fault bar like this can often be used to help age a young bird (although this same pattern can occur in adults that accidentally lose all their tail feathers). 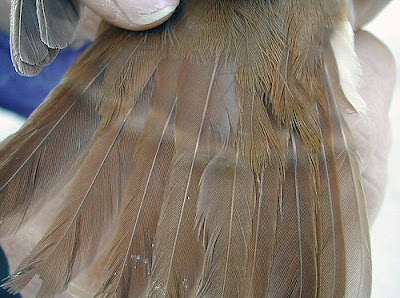 The Carolina Wren above was not our only paddle-tailed bird. In October 2004, we banded the HY House Wren shown in the next two photos. There are several interesting things about the tail of this bird. Five of its rects had the same kind of paddle-like tip (it was worn off in one of them); these extended about 5 mm past the "normal" ends of the feathers. 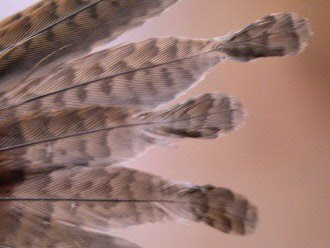 All the tail feathers were fully grown in except for the three on the right in the photo below. Any feather that gets pulled out will begin to regrow immediately. Several weeks prior to capture, this wren had lost these three feathers which were now nearly replaced. Note how much fresher and blunt-tipped they are compared to the three feathers on the outer left. 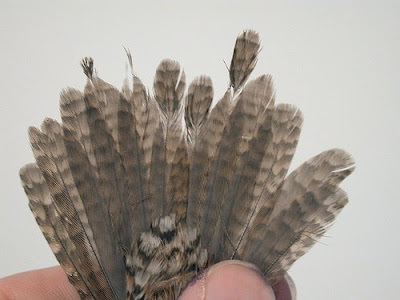 In many species of birds, HY individuals have more pointed outer rects than do adult birds. This is an especially useful tool to help age warblers -- I'll do a post in the future with some better examples of how we use feather shape to help age birds. Finally, note that the wren appears to have one extra tail feather. The tip of the second feather on the left looks split in two, but you can see the feather has only one shaft.

Wrens and sparrows haven't cornered the market on extra tail flourishes. We occasionally capture Cedar Waxwings that not only have those pretty little red waxy tips on their wing feathers (specifically the secondaries, or inner wing feathers), but also on the tips of their rects. I've also heard these waxy tips may occur in rare instances on the outer wing feathers (primaries) or the row of feathers over the wing feathers (greater coverts). The function or purpose of these waxy tips -- wherever they occur -- is not known. 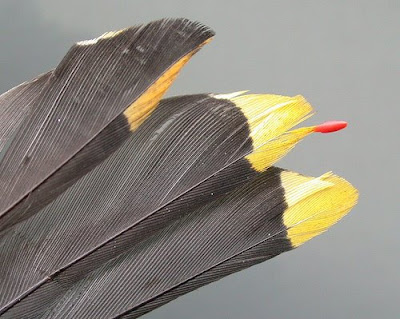 We always keep our eyes peeled for these interesting little oddities.
Posted by Julie Craves No comments:
Email ThisBlogThis!Share to TwitterShare to FacebookShare to Pinterest
Labels: Birds and bird surveys

RRBO in the Dearborn city calendar

A few months ago, the city of Dearborn had a contest. Residents were asked to submit short essays on why they loved Dearborn. The authors of winning entries would have their photo taken for the 2009 city calendar.

I wrote about my favorite thing about Dearborn: the great birds here on campus and the Rouge River Bird Observatory! Here is the page out of the new calendar. It features Dana Wloch, yours truly, Greg Norwood, Beth Johnson, and Mike Perrin out on the lakeside trail, and an inset of me holding a flycatcher accompanied by an excerpt from my essay. I'm a bit disheveled, which is typical for me on banding days. 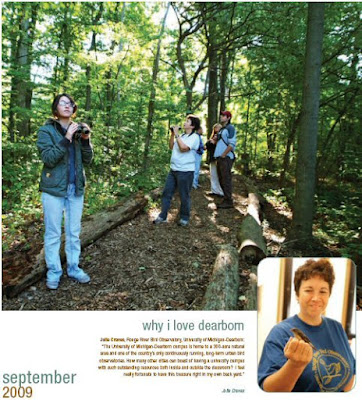 You can see the entire two-page spread by downloading this PDF. This calendar goes out to every household in Dearborn -- great visibility for RRBO!
Posted by Julie Craves No comments:
Email ThisBlogThis!Share to TwitterShare to FacebookShare to Pinterest
Labels: Misc. news
Newer Posts Older Posts Home
Subscribe to: Posts (Atom)