Another very quiet week, with not many migrants around. A higher percentage of the young resident birds that I'm banding have not yet started or are just beginning their post-juvenile molt than I usually see this time of year. This is the replacement of their juvenile plumage into their first winter adult plumage. It's usually in full swing right now. Same with the molt of adults, who typically molt all of their feathers after they are done nesting. The adults I've banded have just started this process.

The extent of this molt this year tells me that these species -- cardinals, catbirds, robins, and Song Sparrows mostly -- were a little later in fledging than usual. It could be that the big flood in May caused some birds to lose their first nest, and pushed breeding back a couple weeks. Or, good conditions this summer (warm, good amount of rainfall, lots of bugs) could mean some species attempted a third nesting.

I have heard and seen adult birds still tending their newly-fledged young. Here is a brand-new youngster I captured this week. Can you guess the species? 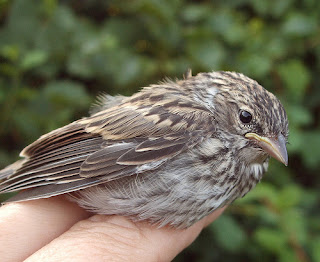 While it seems a little lost and forlorn, I found one of the parents in a nearby net. Although both sexes of this species look alike, they can sometimes be distinguished in the hand. The incubating parent (in most songbirds, just the female) develops a bare area on her belly called a brood patch. The area loses feathering and becomes vascularized in order to facilitate the transfer of heat from her body to the eggs and chicks. I was able to tell that this was the female parent of the chick above. 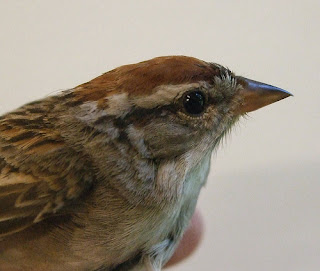 It's a Chipping Sparrow, a common nester here on campus.

Another frequent nester is the Baltimore Oriole. Because they migrate so early in the season, I sometimes don't catch any in the fall. I had three in one net this week, including this adult male. Orioles are pretty sassy. This one seemed astonished, and a little indignant. 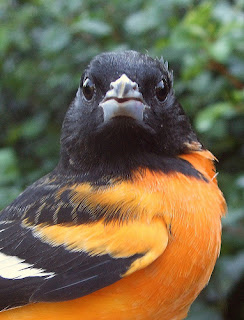 Over the weekend, we had some north winds which brought in some migrants that were observed on our survey on Sunday. This week may bring a small uptick in captures if the migrants stick around, but the forecast is for more southerly winds and hot temperatures toward the end of the week. That could slow things down, but we'll see!
Posted by Julie Craves 1 comment:
Email ThisBlogThis!Share to TwitterShare to FacebookShare to Pinterest
Labels: Banding

RRBO began the 2011 fall banding season on 12 August. The first week was a "soft" opening, when we put up only a portion of the nets each day, make adjustments, and handle all the young fledglings in the area with some extra TLC. We were also taking some extra time to prepare for a special project, which I'll write about in a future post.

Not too many migrants were present. We caught a Yellow-bellied Flycatcher on 15 August, which was an early date for a fall migrant in Dearborn. A Chestnut-sided Warbler captured on 17 August was the only other passage migrant netted this period. I like the inquisitive look it has. 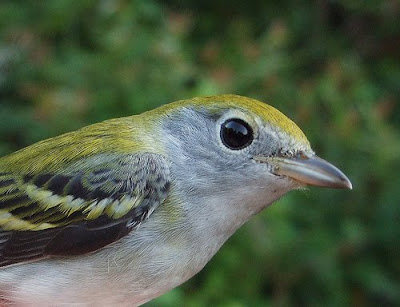 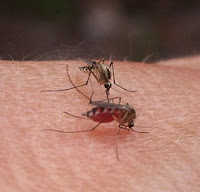 What we did have was a lot of mosquitoes. This is the worst year for mosquitoes I can remember. In fact, so many come inside with me that they are as bad inside the banding room as many typical years outside.

The coolest bird we caught was not uncommon -- a male Northern Cardinal. But it was a bird we had banded on 19 April 2001 as a second-year bird. Thus, he is now over 11 years old, the oldest cardinal we have recaptured and the second oldest bird we have ever recaptured. While 11 years falls short of the record listed at the Bird Banding Lab web site of over 15 years, it was still good to see him. Over the years he has been recaptured 21 times, but the last time was in 2009.

This is our fifth year of studying the diets of fall migrant birds on campus. We're off to a good start with our sampling of seeds in the poop of various birds. These are all from robins and catbirds. 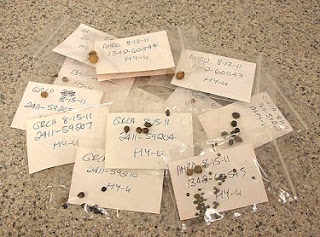 Just about every species of fruit that is currently ripe has showed up in the samples: grape, pokeweed, glossy buckthorn, dogwood, cherry, and nightshade.

Speaking of robins, three of the six robins we've caught so far have weighed less than 60 grams and have been fairly emaciated. By comparison, only six robins out of over 3500 previously banded here have weighed less than 60 grams, and the average weight for robins is about 78 grams. Generally, I only see birds like this when they are on death's door, and often after they have been exposed to lawn chemicals. I don't have an explanation for the lean condition of these birds, but we'll be monitoring future captures carefully.

Finally, it looks like it may be a very good year, the first in some time, for chickadees. Over the decade between 1992-2002, the resident chickadee population on campus was on the decline. Last fall, there was a large movement of chickadees in eastern North America. It was notable here, and I wrote about it after our last Winter Bird Population Survey season. Clearly, many chickadees chose to stay and nest here, as they were evident on our spring survey as well. We've already banded nine, which is our average over the past nine years. Our high was 52 in 2002. As you might imagine, they are quite the little fussbudgets. I'm happy that their numbers are rebounding, but not so sure I want to band a record number of them.

A Black-capped Chickadee was the first bird banded by RRBO during our inaugural fall season in August 1992. That's right -- this is RRBO's 20th fall banding season. Stay tuned for anniversary-year news.