European Goldfinch: established in the U.S.?

Important note: Although RRBO has ceased operations, I am still collecting data. Please see this page for the latest update.

In the fall of 2002, Ford Motor Company planted sunflowers on a 20-acre lot they owned at Hubbard and the Southfield Freeway (M-39) service drive, near their world headquarters. Ford has continued to plant sunflowers, sorghum, and/or a wildflower mix on up to 10 properties scattered across Dearborn.

The fields have always attracted a lot of birds -- I wrote about the numbers seen on this year's Christmas Bird Count. The very first winter the original field hosted an unusual bird: a European Goldfinch (Carduelis carduelis), a bird not native to North America. European Goldfinches are common in the pet trade, and it's not too unusual to hear about sightings of escaped or released pets. Unlike members of the parrot family, European Goldfinches are very hardy and can survive northern winters. The sighting occurred during a time when I had been hearing more and more reports of European Goldfinch sightings, especially in the Chicago area. Curious, I posted a page on the RRBO web site requesting sightings from the upper Midwest. I also kept my eyes on the various Internet birding lists and regional publications. 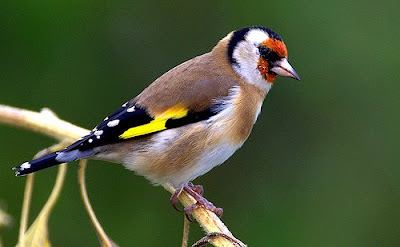 That there were a lot of European Goldfinches out there readily became apparent. I compiled over 400 reports, of which 298 were from Illinois, Wisconsin, Indiana, and Michigan. There was a clear concentration in southern Wisconsin and northern Illinois, a pattern of radiation from the "epicenter" that was more pronounced north than south, and a smattering of reports over the rest of the four states.

It is believed that the bulk of these European Goldfinches -- as well as a handful of other European cage bird species that were reported in the same areas -- originated with a bird importer in the greater Chicago area. From a number of independent reports I received, this importer had apparently deliberately released these species on more than one occasion over time. Believe it or not, as long as the birds are legally imported, there is no federal law prohibiting their release, even if they are not native.

Since 2003, there have been reports of nesting European Goldfinches in northern Illinois. They may also be nesting in southern Wisconsin. Great Tits (Parus major), another one of the species involved in the alleged releases, have also nested in southern Wisconsin and northern Illinois! European Goldfinches nest earlier in the year than American Goldfinches and appear to be ecologically benign, although non-native species frequently end up having unanticipated impacts on ecosystems. Whether the breeding population will grow and persist is not known. In the early part of the 20th century, there were a couple of established colonies in New York, founded by deliberate releases. They eventually died out. However, the proliferation of non-native plant species -- many of which are the natural foods of European Goldfinch -- may prove to be a boon for the species this time around.

I don't believe the majority of the Michigan sightings (or the many Ontario reports I've gotten) of European Goldfinches are attributable to same source. The geographic and chronological patterns do not seem to fit. Some are likely just escaped pets. Many others may be deliberately released birds. Some pockets of reports came from areas with higher populations of people that practice eastern religions, which sometimes advocate setting birds free to accrue merit in the afterlife. Employees at my own local pet store, which often carry European Goldfinches for sale, reported to me that these and other cage birds are sometimes purchased by people of various ethnic backgrounds with the intention of releasing them. I presume this is the source of the Dearborn European Goldfinch.

I ended up writing a detailed account of the reports I received, including background on the ecology and history of European Goldfinches in the U.S. and additional information on their future, in a paper that was just published in North American Birds; you can click on the link to download a PDF copy:

Photo of European Goldfinch in France by Daniel (ParaScubaSailor) at Flickr under a Creative Commons license.

RRBO has been coordinating the Dearborn portion of the Detroit River Christmas Bird Count (CBC) since 1995. The count is held each year on New Year's Day. This year, the 53 species found in Dearborn on count day tied our previous high total. A Wood Duck at the Ford Rouge Plant was a new species for the Dearborn portion of this count. The big news this winter has been the push of White-winged Crossbills into our region. Unfortunately, none were found on count day, but they were found in several locations in the days following the count, so they are added as "count week" birds. This is also a new species, bringing the cumulative species total to 85. Here's a photo of a male crossbill taken by my husband Darrin O'Brien in our east Dearborn back yard on 3 Jan. We were lucky enough to have a flock of 26 crossbills, and a few Pine Siskins, visit the spruce trees. 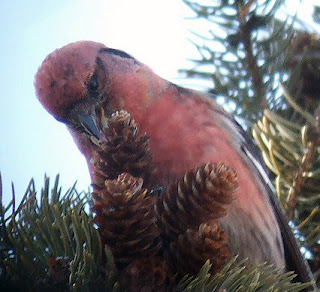 One of the annual challenges is counting the hoards of birds that hang out at the nine or so sunflower/wildflower fields planted by Ford Motor Company around Dearborn. After trying several strategies, we now devote a single team (usually Darrin and I) to spend most of the day concentrating on getting accurate counts of birds in the fields. This helps prevent double-counting if the birds move from field to field, and allows a team to spend the necessary time to make good estimates on what are sometimes very sizable flocks of sparrows or finches.

This year was made a bit easier, as the largest field, on the south side of Hubbard at Southfield, was not planted this year. Another, at Southfield and Rotunda, was plowed under in fall. Still, we had our work cut out for us. The photo below is the field on the north side of Hubbard at Southfield. I've underlined myself in red! This field had the most birds this year. It took us a long time, but we feel comfortable with our count of over 2400 House Sparrows here. These fields have a lot of benefit to wildlife, but the downside is that they have certainly helped boost the House Sparrow population, which has skyrocketed in the last few years. Our final total of nearly 3500 House Sparrows set a new high record. 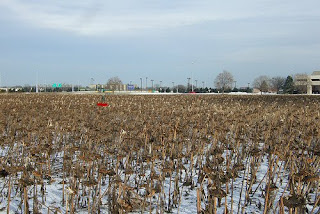 Another group of birds that has begun to overwinter in these fields are blackbirds. Last year the Rotunda and Southfield fields had a staggering 1300 Brown-headed Cowbirds. This year the blackbird flock was more modest. Here's about half of them. Most were Red-winged Blackbirds, along with some cowbirds and a single Common Grackle. Raptors have taken advantage of all the small birds in these fields, and once again we have a wintering Merlin here. We had plenty of opportunities to watch it hunt! 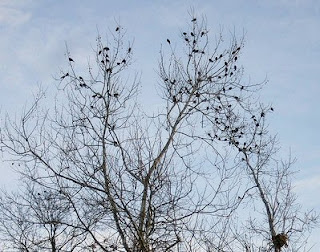 If we have time in the afternoon after going through the sunflower fields, Darrin and I hit a few other spots. We had this female American Kestrel dining on a mouse near Miller Road and Wyoming. 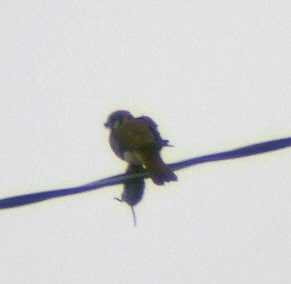 It's always nice to have a hot cup of coffee when adding up the numbers back at the EIC on campus. Here I am with Jerry Sadowski (in the Crocs that match the rest of his outfit!), Greg Norwood (in ball cap), and Gary Hutman, all veterans of the Dearborn count. Jerry and Greg are in charge of counting on campus, and Gary covers Rouge Park (in Detroit, but within the larger count circle). 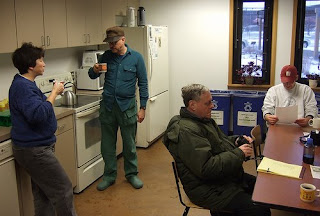 The final story is the continuing saga of the lack of crows since West Nile Virus wiped them out in this area. Up to 2003, it wasn't unusual to count well over 200. That year, we counted 18. Since then, we haven't had more than 8 in any year. Blue Jay numbers, however, have remained pretty constant.

You can view the results of all past Dearborn CBCs on the RRBO web page.
Posted by Julie Craves No comments:
Email ThisBlogThis!Share to TwitterShare to FacebookShare to Pinterest
Labels: Birds and bird surveys
Newer Posts Older Posts Home
Subscribe to: Posts (Atom)