The Detroit River Michigan-Ontario Christmas Bird Count was held, as it is each year, on January 1. This was the 36th year for the count, which is centered at I-94 and Warren Ave, and the 19th year that RRBO has coordinated the field work in the city of Dearborn.

The day began on a high note. As usual, my husband Darrin O'Brien and I drove friend and participant Cathy Carroll to her starting point, so she can walk along the west side Rouge River back to her car on campus. Due to the fact I have just turned old enough to join the AARP (or, perhaps, a lack of coffee), we drove her to the wrong spot! My dunder-headedness turned out to be serendipitous, as I spotted an adult Bald Eagle perched in a tree along the Lower Rouge River just west of Evergreen Road. As we pulled over to admire it, I got a call from my co-worker Rick Simek, who was covering the south end of campus. He excitedly told me he had just flushed an adult Bald Eagle! Later, Greg Norwood, covering the north end of campus, also saw the eagle; Cathy saw it again later, too. While eagles are getting more and more common in the county and the city, this is only the third time we have recorded this species on the count.

Darrin and I traditionally cover the Ford "sunflower" fields which can vary in productivity from year to year depending on which ones are planted, and with what. Usually, the most productive field is the original field at Hubbard and Southfield. However, the last few years it has been planted in hay. (Curiously, given the very high prices and demand for hay this year due to the drought, the hay was still being stored on-site in the field.)  Sometimes a cover crop is used for winter, but this year it (and the one across the street) was left fallow, save for a narrow fringe of sunflowers along the edges, long since picked over.  There wasn't much at this field, nor any of the others except the one adjacent to Ford World Headquarters.


It seemed that every seed-eating songbird in the city was stuffed into that field along Michigan Avenue. Over 200 Red-winged Blackbirds were there, along with over 3,500 House Sparrows; yes they are tedious to count and require at least two hours of multiple estimates. Prior to these fields being planted in 2002, we would tally a few hundred House Sparrows on the entire count. Now it's usually over a thousand, and this year's total set a record. Here's how the last 17 years* look:

All these small birds in one place are very attractive to raptors. At this field were several Red-tailed Hawks, an immature Cooper's Hawk, and a lovely adult Peregrine Falcon, seen earlier in the day winging to this spot from the Oakwood Hospital area. The most unusual species seen at this location was Mute Swan: five were seen flying over and heading east. This is only the second count on which they have been recorded.

The horse paddock at Greenfield Village once again yielded Horned Lakes (five).  Darrin spotted one first, and it prompted this exchange:

Darrin: I have one. It's on the pile of poop to the left of the side door.
Julie: Got it. And here's another...now three...four...five.
Darrin: What?! Are you on the same poop that I am?

Lest you think Dearborn is entirely pastoral, here is a photo approaching the massive Ford Rouge complex, often considered the birthplace of mass industry in North America. The city is really more concrete than natural habitat, and in fact we need fewer people to cover it than we used to a decade ago. 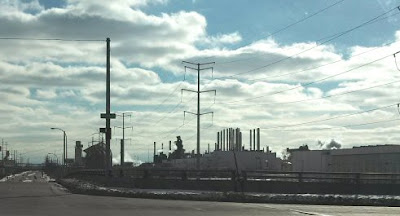 The summer drought played a role in our bird sightings. The soft mast crop (berries and other fruit) was the poorest I can remember. Our 66 American Robins was the lowest number we've counted since 1999; the average over the last decade is over 250.

The drought may also be partially to blame for the widespread tree crop failure (seeds, cones, and other hard mast) this year. Earlier in the season we experienced movement of just about every "winter finch" through the area in search of food. Many kept going, but at least a few hung around. Our total of 23 Pine Siskins on campus was part of a flock that has been either visiting the feeders or feeding on European Alder cones. This was only the fourth count they have been recorded, and this is a record number.

Surely the highlight of the day was also one of the wandering winter finches: ten White-winged Crossbills on a spruce tree in Detroit River CBC compiler Jim Fowler's back yard. This is a new species for the count, bringing the Dearborn cumulative species total to 86.

We ended the day with 47 species, which is one above average. We added a count week species the next day (Brown-headed Cowbird) at the campus bird feeders.


*Although RRBO has been coordinating the Dearborn portion of the count since 1995, we've only had uniform coverage of the city since 1997.
Posted by Julie Craves No comments:
Email ThisBlogThis!Share to TwitterShare to FacebookShare to Pinterest
Labels: Birds and bird surveys
Newer Posts Older Posts Home
Subscribe to: Posts (Atom)