[Update: The jury is still out on the band number and identity. Barb Baldinger writes: "We clearly saw 6/M, but want a better look. It could be 66/M and we only saw the second 6, the space and first 6 in the way the numbers are repeated. If that is the case, he is one of ours, Iggy from UD Mercy, Detroit, hatched in 2011."]

Dearborn regularly hosts Peregrine Falcons, mostly in winter. The most "famous" of these was a Kentucky-born female named "Ember" who hung around in 2010. We knew her history based on the color and alpha-numeric codes on her leg bands.

This site probably has the best explanation on how to "read" Peregrine leg bands. If one is able to get a clear look at the bands and is in the 13-state, 2-province (ND, MN, WI, MI, SD, NE, IA, IL, IN, OH, KS, MO, KY, SE MB, and NW ON) midwest region, the Midwest Peregrine Society's database can be searched for more information.

A favorite location for falcons around here are the Parklane Towers on the north side of Hubbard east of the Southfield Freeway. The tall concrete buildings must look like cliffs, and there is ample hunting in the planted fields, urban areas, and the concrete channel of the Rouge River nearby. In 2013, a pair of Peregrines were present at the towers. At least one was banded, but the bands could not be read. They apparently raised at least one chick.

Two Peregrines were seen over the winter of 2014-2015, and by April seemed to be tending a nest on the roof of one of the towers. Last month, a juvenile bird was seen by the southeast Michigan Peregrine monitors, and the bands of one of the adults was read: black-over-red, 6 over M-- or (b/r) 6/M in shorthand. However, this combo did not get a hit in the database. Grrr....

As a bander, I know that some bird bands have a "silent" leading zero (e.g., the physical band shows 932-12345, but all associated data is really assigned as 0932-12345). There IS a falcon in the database under (b/r) 06/M, a male hatched on 12 May 2012 in Vernon County, Wisconsin named "Drew." He was part of a brood from two unbanded Peregrines nesting at the the Dairyland Power Cooperative's Genoa generating station, on the Mississippi River just south of La Crosse (where my husband grew up). The company has had a nest site 375 feet up on a smokestack at the plant since 1997 as part of a Peregrine restoration program.

Hopefully, Chris or Barb (the monitors) or an occupant of one of the buildings will get a better look or photo of the bands and we can confirm the identity.

I went by last week and found this interesting scene.

Perhaps I should have stuck around to see how that turned out!
Posted by Julie Craves No comments:
Email ThisBlogThis!Share to TwitterShare to FacebookShare to Pinterest
Labels: Birds and bird surveys 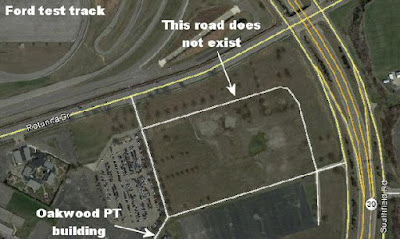 We will be keeping an eye on the sparrows to see if we can catch them feeding young in the next few weeks. Many thanks to Oakwood for the stewardship of these special birds.
Posted by Julie Craves 1 comment:
Email ThisBlogThis!Share to TwitterShare to FacebookShare to Pinterest
Labels: Birds and bird surveys
Newer Posts Older Posts Home
Subscribe to: Posts (Atom)