I recently received a great honor: a new (albeit extinct) species of owl was named after me. Craves’s Giant Barn Owl (Tyto cravesae) was recently described based on fossils discovered in Cuba by my great friend William Suárez. The bird was described in a recent paper published in the journal Zootaxa, Systematics and distribution of the giant fossil barn owls of the West Indies (Aves: Strigiformes: Tytonidae) by William, formerly a curator of the National Museum of Natural History and now living in the U.S., and Storrs L. Olson of the Smithsonian Institution. 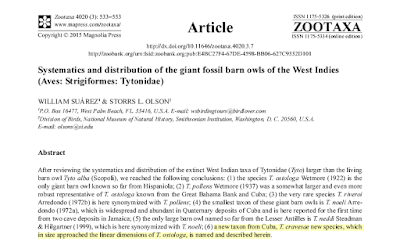 The bones of this owl were discovered in a cave complex in Cuba by William in 1998, and subsequently in several other locations in Cuba. The paper reviews and revises previously described species, with two of those being synonymized with two others. Thus Tyto cravesae becomes the fourth extinct giant barn owl described from the West Indies.

These owls were all larger than Tyto alba, the common Barn Owl found across much of the world today, including in North America. Based on the bones found, Craves's Giant Barn Owl was likely somewhat larger than a Great Horned Owl. There were also even larger prehistoric owls in Cuba in the genus Ornimegalonyx, estimated to be a meter or more tall!

The cave deposits date from sometime in the late Pleistocene (the epoch ranging from 2.5 million to around 12,000 years ago), and include the bones of prey items.  Craves's Giant Barn Owl fed on large rodents and small mammals. The lack of other predators on mammals besides giant birds in the West Indies is the main reason these owls evolved into such large forms. "My" owl probably often preyed upon hutias, a group of rodents endemic to the Caribbean region; one species identified with the Tyto cravesae bones was that of the Cuban or Desmarest's Hutia (Capromys pilorides). The giant Antillean owls probably became extinct due to the loss of their prey species.

I got to know William during several U.S. licensed trips to Cuba in the early 2000s in which I assisted with and lead bird surveys throughout the island. William is a leading authority on Caribbean birds and mammals, both living and extinct. He has written or co-authored many papers as well as a book, and described and named several other new genera and species of birds. Over the years, we kept in continuous touch both as friends and colleagues.

In the paper describing Tyto cravesae, the section describing the naming of the species states: "After Julie Craves, of the University of Michigan-Dearborn for her dedication to avian conservation and her boundless appreciation of Cuban friends and birds."

No matter what he has encountered, William has persevered with remarkable optimism and good humor. His strength and accomplishments have been a continual source of inspiration to me.  I am incredibly honored that he chose to name this new species of owl after me, when the true honor has been mine, simply having the opportunity to be his friend.

Read more at the BirdWatching Magazine blog, where William and I responded to questions from editor Chuck Hagner. In 2002, I also wrote an article for the magazine, The Birds of Cuba. In 2003, colleague Kim Hall and I published a paper on some of the survey's findings in the Journal of Caribbean Ornithology, Notable bird sightings from Cuba, winters 2002 and 2003 (pdf).

Another new species has been added to the Dearborn checklist. I received, through a chain of 6 people, a clear photo of a Yellow Rail at the Ford Rouge Plant from October 8. It was at a building near the Dearborn Truck Plant. There is wetland/pond habitat at the visitor center of the plant, adjacent to the truck plant that the bird may have been attracted to. I do not have permission to post the photo, but there is no doubt of the identity of the bird.

I have no information how long/if the bird remained, but there is no public access to most of this facility. The photo showed the bird near a building. This could indicate it was injured, but I have heard of rails, including Yellow Rails, showing up in unusual locations like this during migration. Yellow Rails often try to flee by running and hiding rather than flying, yet may appear so tame as to emerge from marsh vegetation at an observer's feet. Thus, a good photo of an ambulatory rail doesn't necessarily indicate that the bird needed "rescuing."

Yellow Rails are secretive, marsh-dwelling birds that are hard to find even at known breeding locations, such as Seney National Wildlife Refuge in the Upper Peninsula. The species is listed as State Threatened in Michigan.
Posted by Julie Craves No comments:
Email ThisBlogThis!Share to TwitterShare to FacebookShare to Pinterest
Labels: Birds and bird surveys
Newer Posts Older Posts Home
Subscribe to: Posts (Atom)