Over the years, the University of Michigan-Dearborn has hosted its fair share of rare birds, including the first state record of Virginia's Warbler. Earlier this month, the University's Flint campus had its turn, hosting an Ivory Gull, a charismatic and beautiful high-Arctic bird that was a life bird for many that saw it. Sadly, it was found dead a few days after its discovery -- a good article about the bird can be found here. That article notes that this bird was the second Ivory Gull "on record" for Michigan. It's true that this is a remarkably rare bird in the United States, and Michigan. There have been, however, multiple reports in the state.

As far as I know, the first documented Ivory Gull in Michigan was an immature bird seen on the Detroit River between Grosse Ile and Trenton on 12 January 1949. This short note was published in Michigan Audubon's The Jack-Pine Warbler (Vol. 27, No. 2) in 1949. 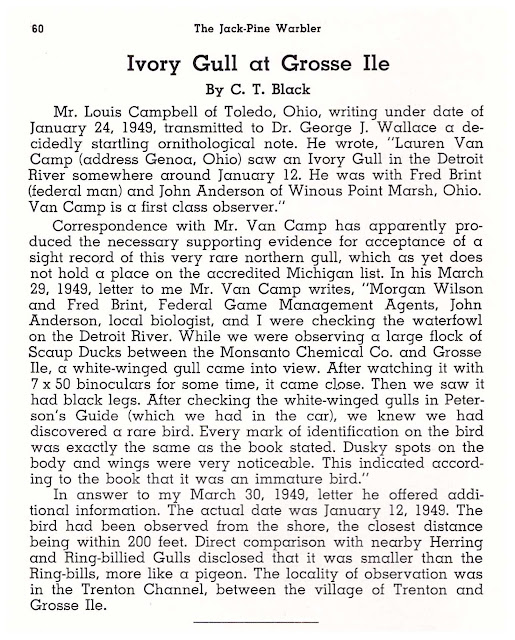 A little more on these observers: Laurel (not Lauren) Van Camp was a game warden for Ottawa County, Ohio (later with the Ohio Department of Natural Resources), a prolific conservation writer and bird bander, and the man who laid out the trails at what is now the Magee Marsh Bird Trail (read more in this piece from the Black Swamp Bird Observatory). Morgan Wilson and Fred Brint were both with the U.S. Fish and Wildlife Service and worked in game management and Migratory Bird Treaty enforcement. John Anderson was a waterfowl and wildlife biologist and manager of the Winous Point Shooting Club in Port Clinton, Ohio. These were all professional biologists that specialized in waterfowl and thus also likely to be well-versed in gulls and other waterbirds.

At that time (of landline telephones and bulky, expensive film cameras) there was no formal avenue or protocol to report interesting birds. A regular record of birds was published in the Jack-Pine Warbler in its seasonal survey, and more compelling birds were written up and published, as above.

Nearly 40 years later, an organization of birders was formed to maintain the official state bird checklist, including by determining the acceptability of sightings of birds unusual to the state. Soon after its formation in 1988, the Michigan Bird Records Committee began reviewing historical records. Initially, all first state records had to be accepted by a unanimous vote. The Detroit River Ivory Gull was "not accepted" due to a 6-1 vote; the write up from the 1990-91 annual report is below:

In 1999, the Committee rules changed, and first state records could be accepted under same standards as other records (a vote of 7-0 or 6-1 in the first round of voting, or 5-2 or 4-3 in a resubmitted round). The Detroit River Ivory Gull status did not automatically change, although the original vote was 6-1. The record was re-evaluated and voted on again, and fared even worse than before, with 4 votes not to "accept." Here is the 1999 annual report:

Personally, although I have done quite a few winter waterfowl counts along this very stretch of the river, I have never seen a Rock Dove (pigeon) out on the river with gulls and ducks. Less unusual would be a white Rock Dove, but I can't say I have seen too many in my 30+ years of urban birding, and none with black legs as described (Rock Doves nearly always have pink legs and feet).

When Ivory Gulls are seen in the U.S. or southern Canada, it is not uncommon for several birds to be present, or for one bird to range widely throughout a region over the season*. On 1 January 1949, less than two weeks before the Detroit River sighting, an Ivory Gull was reported from Lake Michigan's Waukegan Harbor. The Illinois records committee report, published in 2003:

And just prior to that, from 28-31 December 1948, an immature Ivory Gull was present in at Port Burwell on Lake Erie, Ontario.

To my knowledge, the Detroit River Ivory Gull is the first report of this species in Michigan, and the only record from Wayne County.


*This winter, an Ivory Gull was seen on 29 December 2016 outside Columbus, Ohio, and another on 3 March 2017 in Colchester, Ontario; some people speculated the latter bird was the same one that showed up in Flint.