(Cross-posted at the RRBO web site)

Our 22nd fall banding season took place on 29 days from 15 August to 5 November. An average of 15 nets (12 meter equivalent*) were open an average of 4.6 hours per day. This is the fewest number of days we have been open in a fall season, although our modified hours were intentional -- we wanted to concentrate on maximizing the data we obtain on the fall diets of migrant birds.

Unfortunately, we also lost a 10-day period while we tried to live trap an abandoned cat that had found its way into our banding area. With the safety of birds coming first, we cannot have our nets open when we know there is a predator in the area. We brought this cat to the local shelter, where they felt it was possible it could be put up for adoption. Sadly, people dump unwanted pets here fairly regularly. This is tragic, as is the toll on wildlife taken by owned cats that are let outdoors. I've said it before, but it bears repeating: please keep your cats indoors!

Weather
Unlike some years, we did not lose much time to bad weather. I hesitate to complain, but the weather was almost too nice on banding days! The best banding conditions usually occur on calm, overcast days, often before an approaching weather front. This season, over 80% of the banding days were clear or mostly sunny.

Fall banding numbers often also have a lot to do with weather in the preceding seasons. Unlike the ridiculously wet 2011 spring and summer seasons, and the equally parched months of 2012, fall banding was preceded by a spring and summer of relatively normal temperatures and precipitation. April was cool and wet, while May was overall quite warm except for a late frost in mid-month. Average monthly temperatures for June-October were close to the recorded averages for the period 1981-2010. Precipitation for June-October was also close to average, except for August. That month, the rainfall total was nearly three inches above average, but nearly 2.5 inches of that fell on one day, August 12.

Last year's drought caused a serious lack of fruit on shrubs and trees during fall 2012. Nature often makes up for lost productivity, and did so this year. The fruit crop on most plants was abundant if not phenomenal. As noted in my last blog post, the wild grape crop was the heaviest I have seen in over 25 years. Anybody who has an apple tree in their yard can attest that after last year's near complete crop failure, apples were so plentiful that trees broke under their weight. The same was true for their very close relatives crabapples and hawthorns.

The primary non-native fruiting species here are buckthorns and bush honeysuckles. They all seemed to flower and bloom a little later than usual this year, perhaps impacted by the May frost. However, they had large crops.

I noted only two types of fruiting plants that seemed to have below-normal crops. Black cherries, which were one of the few trees that fruited well last year, took a break this year with virtually no crop. Eastern redcedars also seemed to set less fruit than usual.

Summary
As might be expected with a modified banding season, we ended up banding a modest 550 new birds and handling 87 recaptures of 58 species. This includes two species released unbanded, House Sparrow and Ruby-throated Hummingbird. A total of 741 birds were netted (which includes birds released unbanded). Our capture rate was 39.4 birds per 100 net-hours. Here is how this fall compared with the 21 previous autumn seasons:


The top ten bird species banded this fall (new captures only) were:
Numbers and Trends
The high number of grackles is just a hit or miss event. We get very large flocks near our banding site; flocks of over 500 blackbirds, of which most are grackles, is not uncommon in October. They occasionally get flushed into the banding area, but often do not "stick" in the nets.

Banding hummingbirds requires special equipment and a permit amendment, so we release them unbanded. If we didn't, they would have come in at #2 on the list with 40 captured. Some may be repeats of the same bird, but there are often 3 or 4 in the nets at the same time throughout the season, so this is close to an accurate number. They are most often caught in nets adjacent to two plant species at which they nectar: Spotted Jewelweed, a native wildflower; and Glossy Buckthorn, a non-native shrub. The latter has small blooms from early spring through fall and I frequently see hummingbirds using these flowers.

This is the first year we have missed banding any Gray-cheeked Thrushes or Philadelphia Vireos. This may be due to the timing of our gap in banding. This is the third year in a row we did not band any Wood Thrushes. Some years ago, Wood Thrushes were common nesting species here. This is a species that is declining over much of its range, and their absence here may reflect those diminishing numbers.

Both Swainson's Thrushes and Gray Catbirds continued a long-term decline in our nets that I have written about previously. Scrolling down on this page will present graphs on these two species, plus Hermit Thrush; the trend remains the same.


Two important things happened around 2005 that may help explain this: first, the bike path that runs through campus -- wrapping around 3 sides of the banding area -- opened. It gets a great deal of traffic. Second, we began experiencing canopy loss due to falling ash trees killed by the Emerald Ash Borer. This dramatically changed the character of the forested area at UM-Dearborn. Not only did it result in a different mix of trees and shrubs, but probably created a more open and inviting habitat for our increasing deer herd, which alter ecosystems themselves.

So many changes have taken place around our banding site over the years, including the construction of several nearby buildings, and a large, busy parking lot adjacent to the net lanes. Increased development, habitat changes at the site and landscape level, higher numbers of mammalian predators, weather events... it's not possible to tell what may be responsible for our declining capture rate. No doubt it is a combination of things, and we will be pondering the future direction of the banding program in the months to come.


Highlights
We have only banded 6 Golden-winged Warblers in the past 21 fall seasons, so this bird on September 10 was a treat, and our first since 2005. 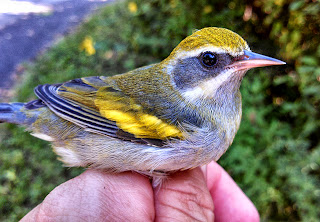 The past ten years of so, Northern Waterthrushes seem to be a little scarce, and some years we do not band any. Even just the four we banded this fall was better than we've done since 2006. 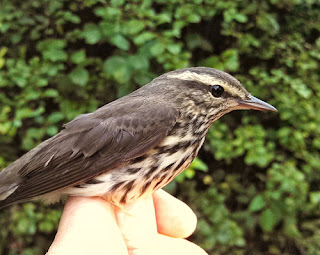 An interesting Orange-crowned Warbler was banded on October 14. It had large, distinct dusky centers to its undertail coverts. This is a feature more characteristic of the subspecies that is resident in California, and I've never seen it on any of the birds I've banded here in migration. Bill measurement can be helpful in distinguishing subspecies, and while this one was a little large, it was within the high end of the range of the subspecies expected to pass through Michigan.

A Sharp-shinned Hawk banded in mid-September. 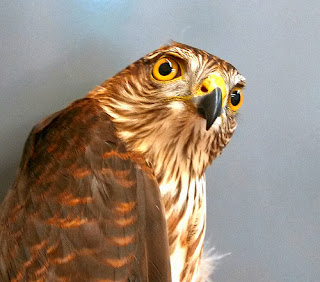 Recaptures
Twenty-three individuals of 9 species of passage migrants (those which do not normally nest or winter in this area) were recaptured. Sixty-five percent of them maintained or gained mass. Half of the birds that lost mass were sparrows. This is fairly typical of this site; insectivores and frugivores tend to gain weight, while seed-eaters tend to lose weight, or gain just small amounts.

We also recaptured 13 birds banded in previous years. The oldest was a female Northern Cardinal first captured in October 2001, making it over 12 years old. Another old bird was a female American Robin first banded as an adult in 2008. She is at least 6 years old. You can view more longevity records here.

Seeds!
We obtained another 318 seed samples from 11 species of birds. This included two new "contributors": a Brown Thrasher (which had eaten pokeweed and grape) and a Willow/Alder Flycatcher (which ate honeysuckle). This brings our total sample size to more than 1,500. Over half are from American Robins, and other large percentages from Gray Catbird, Cedar Waxwing, and Hermit and Swainson's Thrushes.

Credits, kudos
Finally, I’d like to thank Dana Wloch, this year's assistant, and her sponsor, the Michigan Audubon Society. This is the second year in a row MAS has supported Dana's work helping with banding, completing many more species accounts on our seed identification website, and her continued work with our fall dietary study cleaning, sorting, identifying, measuring, and cataloging fruits and seeds. This banding season would not have happened without MAS and Dana, and the on-going work of RRBO could not continue without the support of many donors.

*In order to compare different locations or years that may operate the same number of hours but with more or fewer nets, capture rate is calculated by "net-hours." One net hour is one 12-meter net open one hour, or two 6-meter nets open one hour, etc. This rate is often expressed per 100 net-hours for more manageable numbers.