Every year since 2002, the year West Nile Virus was first detected in Michigan, I have lamented the loss and subsequent lack of recovery of American Crows. This winter, only a single crow was counted during the survey period. This is the seventh year in a row with fewer than 10 total counted on the survey. The average number of crows found over the survey period prior to WNV was 139; the mean since (2003-2010) is 7. I know of only two pairs of crows nesting in Dearborn. I don't know if these four birds have some sort of immunity to the virus, but I find them in the same place every year, and they don't seem to produce any surviving young.

Tufted Titmouse is another species that suffers high mortality from West Nile virus. They seem to have made a come-back in recent years, and this year the survey recorded the highest number since 2002.

Sparrows in general were seen in lower numbers this winter, but this could be due to the fact that the many of the Ford properties, which typically attract thousands of birds and which we tend to see a little overflow, were harvested bare this year.

American Robins were plentiful, as they have been most recent years. This is the eighth year in a row where they have been recorded on 75% or more of the survey dates (the survey period runs from 20 December to 20 February). The average number of robins seen on each visit has also been increasing, as the graph below indicates. 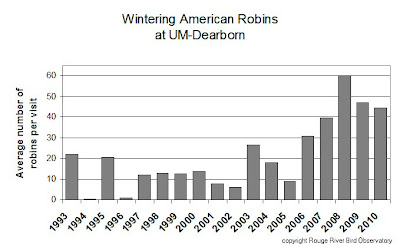 So long as robins are able to access some water (although they will eat snow) and have a supply of food (mostly fruit, but also invertebrates in leaf litter, so snow cover is a handicap), they'll stick around.

Other than those "highlights," it was a rather below average winter. I tallied 37 species, just one species below the average. Other parameters, such as individuals counted per hour or per visit, were also slightly below average, although not dramatically. However dull, long-term data like this is very important for detecting population trends and responses to climate change, habitat alteration, or pathogen introductions, as the robin and crow examples illustrate. And since this survey uses multiple visits over the winter season, it is more robust than one-day counts such as the Christmas Bird Count. In fact, it is probably the unsung hero among the many datasets RRBO has put together over the years.

You can view an introduction to how the Winter Bird Population Survey works, as well as all the results, on the RRBO web site.
Posted by Julie Craves No comments:
Email ThisBlogThis!Share to TwitterShare to FacebookShare to Pinterest
Labels: Birds and bird surveys

How to detect ruffled feathers

One of my favorite non-bird books is The Songs of Insects, a fabulous guide to dozens of species of crickets, cicadas, and katydids. Photographer Wil Hershberger's web site has a page where he notes the presence of two small filoplumes on the napes of songbirds he'd photographed. Filoplumes are specialized feathers, long and hairlike, that are most numerous at the base of wing feathers. Special sensory cells at the base of filoplumes transmit information on the position and movement of wing feathers during flight. According to the Manual of Ornithology: Avian Structure and Function

, many passerines also have filoplumes sticking out of their crown and nape, "perhaps warning the bird when wind disrupts the smooth outer surface of the plumage."

I found this incredibly intriguing, and when I had the time, I looked for these plumes on the birds I banded. Sure enough, there they were! I was able to find them on a variety of species, both male and female, and could even see them on some older head shots I had taken during previous fall banding seasons. Although not particularly easy to photograph (especially with one hand!), here is a little slide show of some of my shots. Look at the back of the neck -- you might have to slow the speed down a bit or pause on some photos. (Note: apparently some Firefox users cannot see the Flickr slide show, a known bug with Flickr. If you have a Flickr account, it might help to log in.)

A 1989 paper (pdf) in the Condor, the journal of the Cooper Ornithological Society, described the presence of these protruding filoplumes on the napes of many passerine species. The authors noted that species which lacked these plumes had dense, stiff feathering on their napes, while species that displayed the filoplumes had softer and more flexible feathering in this area. They also concluded that these plumes served to detect disturbances in the feathers in an area that birds could neither see nor reach. The looser plumage might have less insulative properties to begin with, and unnoticed disheveled plumage might make a bird even more vulnerable to heat loss. A quick shake or perhaps scratch of the head, or facing into the wind can smooth the feathers once again, correcting the situation.

It's hard to believe I handled tens of thousands of birds -- with part of the routine being close scrutiny of plumage -- without making particular note of this interesting characteristic!

We received a report of a young American Robin banded here on campus 28 October 2005 being found dead in Georgetown, Louisiana. There was no specific information on the date the bird was found, only "2009." Georgetown is in Grant Parish in north-central Louisiana, near the eastern border of the Kisatchie National Forest.

This is the 8th robin (out of nearly 3500) we have had recovered from out of state, and the third from Louisiana. Four more were also from the deep south, and one was from Ohio.

You can view a table and an interactive map of all of the birds banded at RRBO that have been recovered outside of Michigan on the RRBO web site.
Posted by Julie Craves No comments:
Email ThisBlogThis!Share to TwitterShare to FacebookShare to Pinterest
Labels: Banding
Newer Posts Older Posts Home
Subscribe to: Posts (Atom)