Dearborn Passenger Pigeons: Then and Now

I recently became aware of an interesting website: Project Passenger Pigeon.  Since 2014 marks the 100-year anniversary of the extinction of Passenger Pigeons, a group based out of the Chicago Academy of Science is using its story as an opportunity to educate people about extinction, habitat preservation, and species conservation.

The web site is very extensive. Among many other topics, it provides a great deal of information on Passenger Pigeons in various states, including a good account of the bird's history in Michigan. I'd like to add to this historical account because Dearborn figures in Michigan's Passenger Pigeon history, as I found out when I was researching my book, "The Birds of Dearborn: An Annotated Checklist."

On September 14, 1898, a Passenger Pigeon, one of three birds observed, was collected by Frank Clements. The first authoritative book on Michigan ornithology was Michigan Bird Life by W. B. Barrows, published in 1912. That book reports the location of these pigeons as "Delray" which is an area in southwest Detroit. Further digging has revealed that this location is not correct.

In a note published in the short-lived Bulletin of the Michigan Ornithological Club, Philip Moody -- who was with Clements at the time of collection -- identified the location as "Chestnut Ridge." My previous research indicated that this was a large woodlot owned by the Chestnut Ridge Land Co., also marked on some maps as Private Claim 31, on the southwest side of the Rouge River near what is now Rotunda Drive. Several years later, J. C. Wood, another prolific collector of birds in Wayne County, clarified with Moody the precise location: Private Claim 660, Dearborn Township.

Thanks to modern technology, we can look at the 1876 historic map of Dearborn Township overlaid with today's Google Maps (you can zoom and adjust transparency) and see that PC660 stretched from the Rouge River southwest to just past the intersection of Rotunda and Pelham; most of the area is now Greenfield Village. At the time of Wood's 1910 note, the specimen was in Toronto in the collection of James Fleming, a well-known Canadian ornithologist. This specimen is currently at the Royal Ontario Museum in Toronto, and the locality is listed (incorrectly) as "Delray, Detroit."

The Dearborn/Delray bird is often cited as being the last collected in the state, although a search of the ORNIS database reveals a specimen housed in the Yale University Peabody Museum from Bay County in January 1906. Fleming's careful research as well as many other references fail to mention this bird or other wild birds in our region past 1900 or so; perhaps this one was a captive bird. Thus, the Dearborn bird is generally considered the last wild Passenger Pigeon collected in Michigan, and one of the last in the region.

The Project Passenger Pigeon web site also lists all the known specimens of this species, and includes 11 locations in Michigan. I will add one more: right here in the University of Michigan-Dearborn's Environmental Interpretive Center.

The pigeon is in a large vintage Edwardian-type glass case, with an unlikely assortment of stuffed specimens of many other birds. 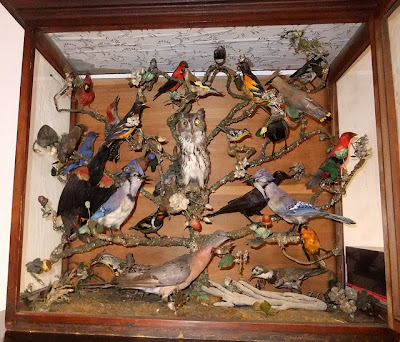 The case was given to the former director of the EIC, Orin Gelderloos, well over 20 years ago. It is not on public display, but is still housed here in the EIC.

The Passenger Pigeon is on the bottom of the case. A Blue Jay perched above it gives some idea of the size of this large bird. 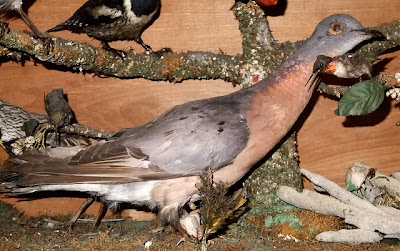 Details on the age of the case -- which if not Victorian-era is certainly of that style -- or the origin of the birds in the case are not indicated on the case and remain a bit of a mystery. The bird species in the case are all native to Michigan with the exception of the European Goldfinch in the upper center (although this species was released in the Dearborn area by Henry Ford a hundred years ago, that flock did not persist).

Whatever its provenance, the Passenger Pigeon in the case reminds us of Dearborn's place in the sad history of this species.

Moody, P. E. 1903. A recent record of the wild pigeon. Bulletin of the Michigan Ornithological Club 4:81.