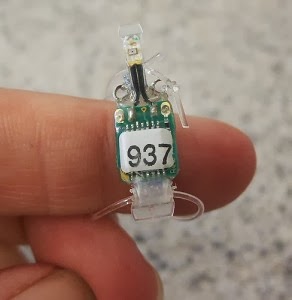 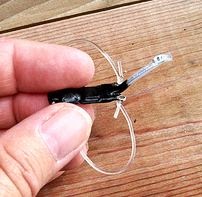 We feel confident we can catch enough catbirds for all of our devices, and look forward to finding out what routes they use on migration; if the routes differ for males and females, or adults and young; where the birds stop during migration and how long they stay at each stopover; and where they spend the winter. Stay tuned for more updates!
Posted by Julie Craves 1 comment:
Email ThisBlogThis!Share to TwitterShare to FacebookShare to Pinterest
Labels: Research news

Last week, a local man, Ron Prowse, came in and spoke to a co-worker (I was off campus) regarding an unusual Blue Jay-sized bird he had seen at his bird feeders on June 12. He provided this photo.

Based on the picture and the description he provided my co-worker, we conclude that this is a Yellow-headed Blackbird (Xanthocephalus xanthocephalus), a new species for the Dearborn bird list!

Yellow-headed Blackbirds are typically a more western species that nests in the grasslands and marshes of the Great Plains. They have nested regularly in Michigan in small numbers for at least 50 years. The most notable small breeding populations are in the Saginaw Bay area. The closest location they are typically found is at Pt. Mouillee State Game Area in Wayne/Monroe Cos.

If I were expecting to see a Yellow-headed Blackbird in Dearborn (which I was not!), I would presume I'd see it during spring migration. A July date is quite interesting, as it would be at a point in their breeding cycle when young are leaving the nest. This wandering bird could be an adult whose nest failed elsewhere, or a non-breeding adult. The most recent sighting at Pt. Mouillee put in eBird was on July 13.

The observer's location not far from the TPC Golf Course along the Rouge River. This portion of the river is channelized, but there is a small wetland on TPC property adjacent to the channel that does have nesting Red-winged Blackbirds and waterfowl. Perhaps the bird was/is hanging around there. Yellow-headed Blackbirds are very tied to cattail marshes for nesting, so the habitat is probably inadequate for that, but it might be a good place to pass the summer.


Hats off to the Prowse's for this great observation!

This is the 258th species documented for Dearborn. For an interesting historical perspective on Yellow-headed Blackbirds in the state, see Why are Yellow-headed Blackbirds rare in Michigan? by Richard Brewer.
Posted by Julie Craves 2 comments:
Email ThisBlogThis!Share to TwitterShare to FacebookShare to Pinterest
Labels: Birds and bird surveys
Newer Posts Older Posts Home
Subscribe to: Posts (Atom)