The 19th year of RRBO's Winter Bird Population Survey has been completed. Over the 20 December to 20 February survey period, 44 species were tallied. The previous annual average number of species is 38. There was a new species for the count this year, Tundra Swan, bringing the cumulative total over the years to 70 species. This is only the second year in which we have recorded Red-shouldered Hawk. Although only seen during one survey, the bird was observed several times throughout the period. A small number of Common Redpolls were recorded on three occasions late in the count period. One species that has been showing a dramatic trend is American Crow. The average number of crows counted per year from 1993-2002 was 139. Then West Nile Virus (WNV) entered our region and greatly reduced their numbers. In Dearborn and much of Wayne County, their numbers have not recovered. The average number of crows counted per year since then has been just 9. That number represents the cumulative number of crows counted over an average of 13 surveys days per year. Over the past decade, crows are often not seen on any given survey day, and the average number of crows per visit has been under 1.0 since 2004. This year it was 1.5, mostly owing to a flock that flew over campus on 1 January, the day of the Christmas Bird Count. Thus, that modest increase probably does not really represent a solid gain in numbers. The graph below tells the sad story. 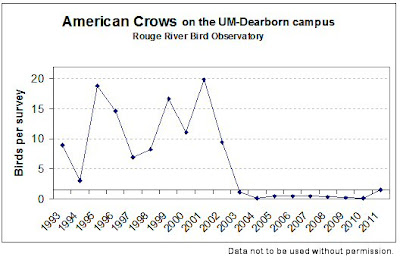 Another species that people were concerned was impacted by WNV was the Black-capped Chickadee. I last reviewed their status in 2002 and 2003. Our data showed a long-term decline that preceded WNV in our area, but this decline seemed to become more pronounced and numbers stayed depressed after WNV became established here. One interesting aspect of chickadee ecology is that every so often, very large numbers of young birds come south in the fall after a year of high productivity in the north. This phenomena occurred in fall 2010. It was much more pronounced east of here, even as closely as across the Detroit River in Canada. At Ontario's Long Point Bird Observatory along the north shore of Lake Erie, the number of chickadees banded over a few days in November exceeded any annual totals for the past 50 years! The ended up banding nearly 2000 chickadees, almost 25% of their 50-year total. Numbers here were nowhere near as remarkable, but they were noticeable here on campus during fall banding and evident in our winter survey numbers. The cumulative total of 355 chickadees during the survey period was the highest since RRBO counted 417 in 1995-1996, and the second highest total ever. The average number of chickadees per visit was the highest since 1998. Here's the graph: 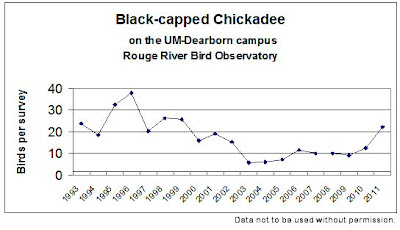 For resident species like crows and chickadees, this type of long-term data set in invaluable in seeing how birds react to various environmental changes, including diseases like WNV. It's critical to have monitoring programs like this in place, ready to provide "before" data when some unanticipated natural event occurs. Next year, after our 20th annual survey, I will be doing some more serious analyses on our data set, with an eye towards publication. Now, on to spring surveys...
Posted by Julie Craves No comments:
Email ThisBlogThis!Share to TwitterShare to FacebookShare to Pinterest
Labels: Birds and bird surveys
Newer Posts Older Posts Home
Subscribe to: Posts (Atom)