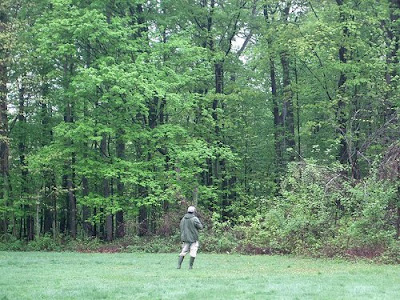 Saturday, May 14 was the North American Migration Count. My husband Darrin O'Brien coordinates the count for Wayne County, and as usual we covered the UM-Dearborn campus, as well as some other spots in Dearborn. It was a pretty lousy day weather-wise, and many of the migrants that we enjoyed last week had moved on. Although we were only able to thoroughly cover campus and one of the Ford fields (with quick peeks at a few other locations) we still managed to have a pretty good day. On campus we tallied 83 species, including 19 species of warblers. None of the warblers were recorded in numbers over 10 individuals, but we had great looks at Mourning Warblers which is always a treat. Most of the warblers were feeding rather high in oak trees, typical of mid-migration as they are among the last trees to leaf out. Other highlights included a flyover Broad-winged Hawk, and the first Gray-cheeked Thrush of the season. We spent more time than we budgeted at the Ford field in the southeast corner of Hubbard and Southfield. We ended up with 48 species there, including 13 warblers species feeding in the oaks along the margins. This field, along with several others, has been planted in a cover crop of clover. While the Bobolinks present there earlier this month have moved on, there were many Savannah Sparrows on territory or with nests, along with Ring-necked Pheasant, Eastern Towhee, and some lingering White-crowned Sparrows. One of the better birds of the day was a calling Eastern Meadowlark in field #8. This is no longer an easy bird to find in Dearborn. Please note that these fields are now posted "no trespassing" so should only be viewed from public roads. RRBO has permission from Ford security to survey them. 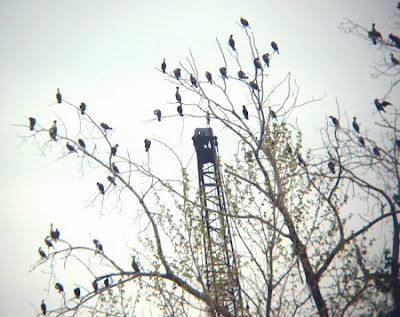 One last surprise was a big roost of Double-crested Cormorants (above) at Fordson Island. Between the birds perched on the dead tree and the ones flying around the Ford Rouge Plant, we counted 102. Back at home in east Dearborn, we had one of the Pine Siskins nesting in the neighborhood. Unfortunately, we did not have the time to walk along the Rouge River channel, or hit a couple of other birdy spots. Overall, we had 98 species (23 warbler species) in Dearborn for the day.
Posted by Julie Craves No comments:
Email ThisBlogThis!Share to TwitterShare to FacebookShare to Pinterest
Labels: Birds and bird surveys

Spring migration has been terrific the last week, so I hope everyone has had a chance to get out and see some birds. I thought I would provide a more detailed update here.

The chart below shows the number of species seen on campus each day since 2 May (the yellow line) as well as the number of warblers species (the blue bars). Click to enlarge. 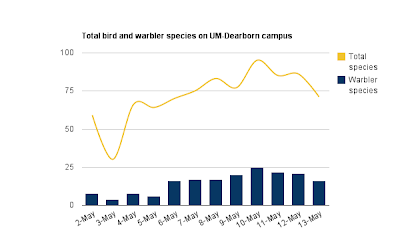 The best day of the season was 10 May, with 95 species recorded, 25 of which were warblers. For some perspective, there are 37 species of warblers that occur regularly in Michigan (4 more are considered accidental; we have recorded all but 2 of the 41 species in Dearborn in the last 40 years). Some of the warbler highlights were a Kentucky Warbler on 10 May, our first record since 2006 of this southern species, and a female Prothonotary Warbler, which was present from 9-11 May. A gorgeous Golden-winged Warbler was also seen from 10-12 May. Closely related Blue-winged Warblers have also been present, while on 8-9 May, a hybrid of the two, a "Brewster's" Warbler, was observed; it sang a Blue-winged song. The total number of warbler species for 2011 so far is 28.

Other bird highlights of this period include a Summer Tanager and an Osprey on 10 May; a fairly early Olive-sided Flycatcher on 12 May, and two Red-headed Woodpeckers on 13 May.

We have recorded 133 species on campus so far in 2011. The total for Dearborn for the year is 151. This includes two records of Clay-colored Sparrow. One was this bird, photographed by Cathy Carroll along the Rouge River near the TPC of Michigan on 10 May. 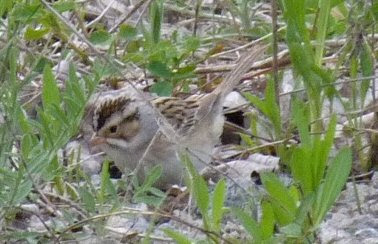 Another was singing at the fallow sunflower field at the south side of Hubbard at Southfield. That location also hosted up to 10 male Bobolinks from 6-8 May.

I think migration has been terrific due to a combination of things. First, we did not get the very early warm spells that we have had the last couple of years, so trees and shrubs did not leaf out early. This has made viewing conditions quite excellent. Cool mornings have concentrated birds in sunny spots in the morning, and also resulted in many insects being most abundant near the water's edge (on campus, along Fairlane Lake). Thus, birds have been easier to find. Some credit has to be given to the luck of weather patterns, which are always the wild card. Finally, I think we are recovering from population losses that were due to the dramatic cold spell in the eastern U.S. in spring 2007.

There is a lull right now, but I expect we will get one more good wave of migrants before the end of the month. Viewing conditions will be more challenging now that foliage is thicker, but do your best to get out and enjoy!