The spring 2011 survey season took place 1 April through 15 June. On campus, regular surveys were conducted on on 50 of the 70 days, with nearly daily surveys between 20 April and 3 June. The surveys recorded 146 species (another 15 were recorded in Dearborn off-campus). This is greater than the previous ten-year average of 130 species, or the five-year average of 133. The peak day was 10 May with 95 species, of which 25 species were warblers. Typically, our peak day is around 80 species and occurs later in the month (May 16-20 the past three years). Weather
Spring 2011 was the second wettest spring on record for Detroit, according to the National Weather Service. April was generally cool, with measurable precipitation 18 out of 30 days and a rainfall total 2.5 inches above normal. May featured normal temperatures, and 21 days of precipitation. This included a dramatic soaker on May 25-26 with over 2.5 inches of rain on campus that caused the Rouge River to peak at least five feet above flood stage (upper left in photo is the waterfall at Fair Lane Estate, inundated by the high water). The month ended up being the second wettest May on record.

Highlights
Thirty species of warblers were recorded on campus this spring. This includes all 26 regularly-occurring species (at least 8 of the last 10 years), as well as the less-common species Pine Warbler (26 Apr), Prothonotary Warbler (9 to 11 May), Kentucky Warbler (10 May), and Hooded Warbler (18 and 22 May).

In general, migration was excellent this year, which has not been the case for the past five years or so. In addition to great diversity, numbers were also better. Early season migrants were especially abundant. The two eBird graphs below show two of these species, Yellow-rumped Warbler and Palm Warbler for the last five spring migrations. Lines represent the highest count of a species submitted on a single checklist from the UM-Dearborn campus during the weekly periods indicated. They show peak numbers in 2011 were much higher than in recent years (click to enlarge). 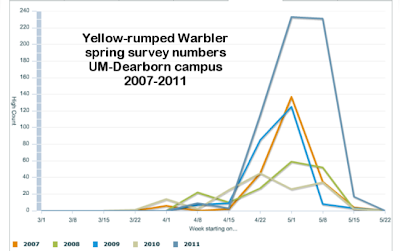 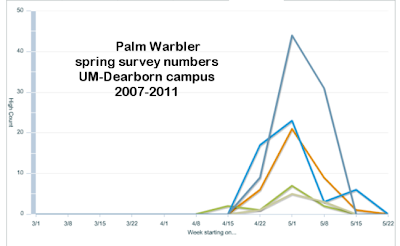 A variety of things could factor into these increased numbers, but a couple stand out, especially for the high numbers of early migrants. First, this was a La Niña year. While La Niña/El Niño cycles do not have a strong impact on our weather here in the upper Midwest (which is more influenced by the North Atlantic Oscillation), it does have a strong impact on weather where many of "our" birds winter. Namely, it was a very wet winter in much of Latin America. Wetter winters tend to have higher insect abundance, which translates into better overwinter survival for some species of birds. Thus, some species may have been more abundant this year.

Another factor could be detectability. The overall cool weather, without early hot spells, slowed leaf-out on woody plants. When trees don't have leaves, birds are simply easier to see and count. The graph below shows the accumulated growing degree days (GDD) for the period of 15 March, when woody plants here often begin to awaken, and 10 May, when we would expect many migrant bird species to be present. GDD are a measure of heat accumulation based on daily temperatures that are often used in agriculture to determine, for example, when crop species are likely to mature (data from Detroit Metro airport, click to enlarge). 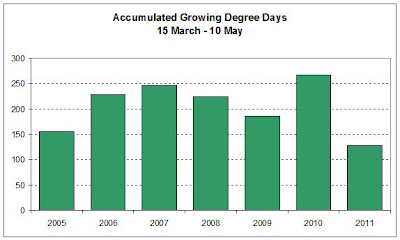 As you can see, by our peak day of 10 May, the accumulated GDDs were the lower than they had been for years, which was reflected in the slow leaf-out of the trees here on campus.
Other notable birds this spring included Osprey on 10 and 23 May; five records of Bald Eagle, of which three were on campus; five records of flyover Sandhill Cranes, all from campus (there have only been 10 records in the past 10 years!); and the spate of Bobolink sightings around Dearborn between 6 and 9 May which included ten singing males in the fields at Hubbard and Southfield on 8 May.

Arrival dates
Only two species arrived earlier than any previous record for Dearborn. They were Ruby-throated Hummingbird on 26 Apr (4 days earlier) and Indigo Bunting (27 Apr off-campus, 1 day earlier). A Blackburnian Warbler on 27 Apr tied the previous early arrival date. Two Common Loons seen over east Dearborn on 20 Mar were also early, but occasionally this species winters in the Great Lakes.

Extremes are interesting, but deviation from a more typical arrival date is probably a more accurate depiction of any shift in migratory phenology. I have 14 to 21 years of spring arrival dates for 43 species. There are a number of ways to calculate central tendency (or the "expected" middle value of a data set). For simplicity's sake in this example, I calculated the arithmetic mean, or average arrival date for each species to compare to this year's arrival dates. For these 43 species:


All spring data from 1994 through 2011 is now in eBird. You can explore all of the survey data input for the campus at eBird. Use the "Change date" button at the top of that page to look at separate years or to compare years.

Many thanks to Darrin O'Brien and Mike O'Leary, who assisted with surveys this spring.
Posted by Julie Craves No comments:
Email ThisBlogThis!Share to TwitterShare to FacebookShare to Pinterest
Labels: Birds and bird surveys
Newer Posts Older Posts Home
Subscribe to: Posts (Atom)