Update on the Ross's Goose

In my last post, I described the discovery of a Ross's Goose on 24 March 2011, a first record for Dearborn. The goose was banded, and we have just received the details from the Bird Banding Lab.

This was a nestling male banded on 7 August 2006 in Nunavut. This much I knew from reporting the goose on the Bird Banding Lab's web site. The location, it turns out, is McTavish Point. The geocoordinates are 67.75, -101.08333, which places it north of the Arctic Circle in the Queen Maud gulf region, where over 90% of the world's Ross's Geese nest. 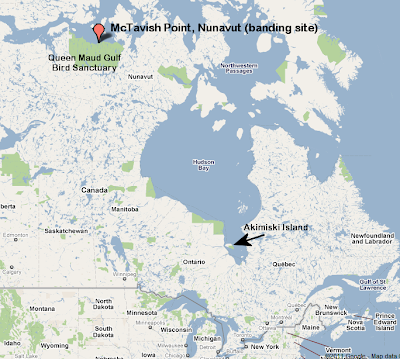 This map (click to enlarge) shows the banding location with a red marker: this is 1900 miles in a straight line from Dearborn. I've also indicated the location of Akimiski Island in James Bay, Nunavut. Although we do not see many Canada Geese with orange neck collars around here any longer, this is where nearly all of them were banded (more on the Dearborn-Akimiski connection here). 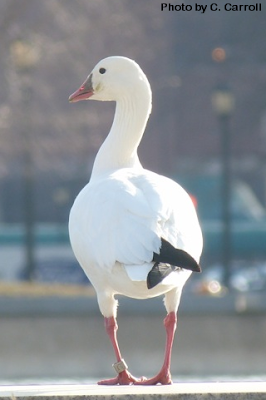 Ross's Geese have undergone a substantial population increase in the last few decades, and while once exceedingly rare in the Midwest and eastern U.S. during migration and winter, they have been showing up in these regions with increasing frequency. The increase in Arctic-breeding geese (especially Snow Geese) has profound impacts on sensitive habitats. "Our" Ross's Goose was banded by Ray Alisauskas, a scientist with the Canadian Wildlife Service, one of the key researchers working on the status of Ross's Goose and Snow Goose and their impacts on Arctic ecosystems. (Thus answering the obvious question of who would be in such a remote place banding geese!)

Most of the specific information on the winter or migratory distribution of Ross's Geese based on band recoveries is from hunters. Presumably, a report like ours, from a live bird, is quite rare.

While not the flashiest bird, this Ross's Goose surely had one of the most interesting stories of any bird we have encountered!
Posted by Julie Craves 6 comments:
Email ThisBlogThis!Share to TwitterShare to FacebookShare to Pinterest
Labels: Banding, Birds and bird surveys, Other RRBO projects
Newer Posts Older Posts Home
Subscribe to: Posts (Atom)