In the late afternoon of 24 March, Jim Fowler, Jr. found an adult Ross's Goose on private property, a first record for Dearborn. Several of us were able to see the bird and get some photos, and were hopeful the bird would be present in a more accessible area the next day. Searches all over the city turned up empty, however.

The goose was in the company of three Canada Geese, and was approximately the size of a Mallard, perhaps slightly larger. In Mike O'Leary's first photo, the bird is relaxed and shows the short-necked appearance of a Ross's Goose (it later got a little wary and raised its head a lot). The feathering between the bill and face was very straight, and the base of the bill had the characteristic blue-gray color and the some of the warty bumps of a Ross's Goose. (These warts are most pronounced on older males, least on females.)

Looking at the bird with binoculars, no grin patch was readily apparent; in the close-ups of Cathy Carroll's photos below, a thin dark line is present. This seems to be within the range of an "acceptable" Ross's Goose. The forehead didn't appear as "steep" as some Ross's Goose photos I have seen, but is also within the range for Ross's. It was obviously not a Snow Goose, but many of these geese have been judged to be hybrids. 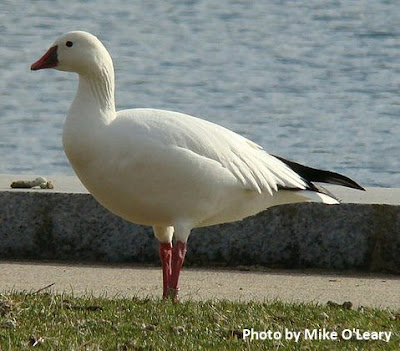 We all appreciated (and enjoyed!) Cathy's belly-crawl up to the goose for a few closer photos. 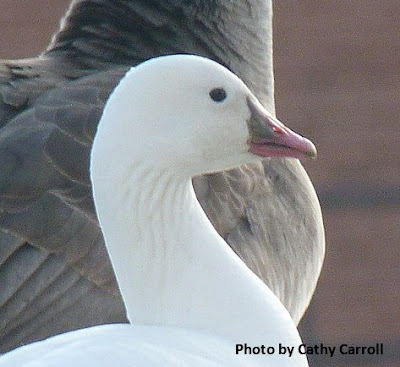 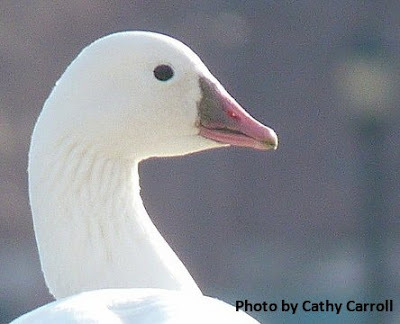 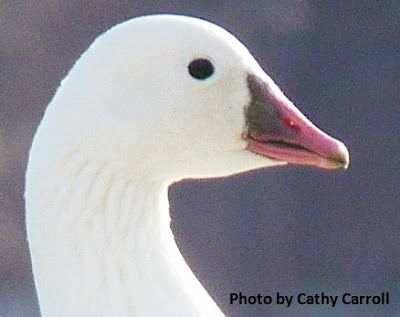 The last two are the same photo; I increased the contrast of the second photo.

Those of us who saw this goose feel pretty comfortable calling it a Ross's Goose, and not a hybrid with a Snow Goose. According to the Birds of North America account for Ross's Goose, the percentage of hybrid Ross's x Lesser Snow Goose was 1.9% between 1989 and 1992 (n=2,943 Ross’ Geese captured) during banding operations in central Canadian Arctic. This was down from 4.7% for the period between 1962 and 1968 (n=29,880). It sure seems like many more birds are called hybrids than are likely to be actually present in the population. Perhaps this speaks to our lack of ability to truly distinguish the species of some intermediate-looking birds.

A final clue is available that may corroborate the identity of this goose. It had a band on its left leg. We have several photos that show most of the numbers, and I have a call into the Bird Banding Lab to the person in charge of looking up partial band numbers.

UPDATE: We have confirmed that this is indeed a Ross's Goose, banded in Nunavut on 7 August 2006, a male of unknown age.

This is the 257th species for Dearborn. There are fewer than 6 records of Ross's Goose for Wayne County.

Thanks to Joe Hildreth for his comment below noting that a banded Ross's Goose was seen in Bowling Green, OH from 13-19 March. The pitch of the forehead, feathering near the bill, and bill structure look strikingly similar to the Dearborn bird. There is a link in the comment to a couple of photos.
Posted by Julie Craves
Email ThisBlogThis!Share to TwitterShare to FacebookShare to Pinterest
Labels: Birds and bird surveys

Looks interestingly like a Ross's Goose that was present at Bowling Green State University down here in OH last week... it was also banded... I will have to pull up my pics to compare...guess it's not that far as the goose flys ... maybe 75 miles... what's the chances there are 2 banded Ross's Geese in that small of an area?

Joe, would love to know the details of your Ross's Goose. If it was the same goose wouldn't that make this story all the more interesting.

Julie, thanks for a great write-up.

Cathy and or Julie feel free to email me at joehildreth@hotmail.com... we can discuss this more there... here is a link to a couple of distant shots I got of my bird last Sat.


my pics aren't nearly close enough nor clear enough to really read the band.. but it does appear to have a 6 if it is upside down like yours is... interesting!

Joe - from your photo your goose appears to have the same amount and texture of blue at the base of the bill, and the same pitch to the forehead. If you want to send me a full resolution cropped image of the leg and one of the face, I'll make some more comparisons -- jac.rrbo AT gmail.com