In my last post I outlined the first portion of my recent trip to Nicaragua. Here is the next installment.

In 2009, during our brief stopover in Managua, Nicaragua, my husband and I met Georges and Liliana Duriaux-Chavarría, the owners of El Jaguar, a fantastic cloud forest reserve and coffee farm near Jinotega in the north-central highlands of Nicaragua. We were immediately taken by both their charm and their dedication to bird conservation. There was no question we would visit them on our next trip to Nicaragua. 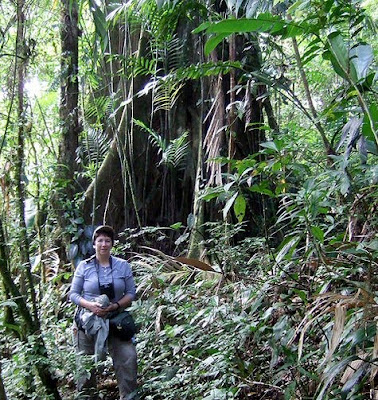 El Jaguar consists of about 240 acres, of which 80% is protected cloud forest reserve. This is beautiful old-growth forest with towering trees and thick multi-story growth. 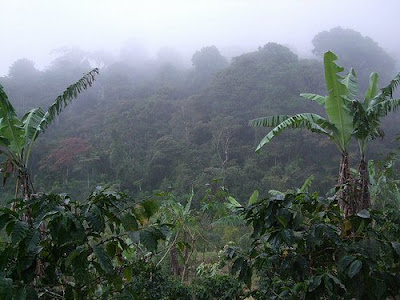 Around 50 acres is coffee (in the foreground above, forest beyond). The coffee areas are broken up into plots separated or connected by forest or natural habitat patches. The coffee itself is grown among banana and other trees, but is not considered heavily shaded. This is because at an elevation of 4300 feet, the farm is covered by misty clouds part of nearly every day. The clouds provide the "shade" and the coffee would suffer from not enough light and a variety of fungal diseases if there were lots of trees planted with the coffee. So while El Jaguar does not qualify for Smithsonian Bird-Friendly certification, they are Rainforest Alliance certified.

Over 270 bird species have been recorded at El Jaguar (we saw about 80 in our few days there). More than 50 are Neotropical migrants (those that primarily breed in the U.S. and Canada and winter in the tropics). This includes an amazing 27 species of "our" warblers -- Golden-winged Warbler, the endangered Golden-cheeked Warbler, and the Cerulean Warbler among them. Due to this rich bird life, El Jaguar was designated as an Important Bird Area by BirdLife International in 2006.

Two winter bird banding stations are run by Georges and Lili at El Jaguar, one in the primary forest, one in the coffee area. Since 2009, El Jaguar has also collaborated with the Golden-winged Warbler Working Group to do regional surveys for this declining North American-breeding warbler. A similar project, the International Wood Thrush Conservation Alliance, is now being launched to benefit the Wood Thrush, and El Jaguar participated in the first workshop. 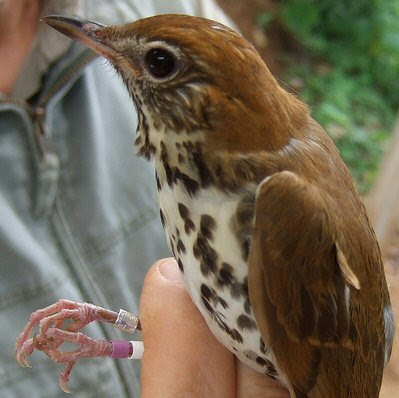 Wood Thrushes are one of the most common North American-breeding migrants found wintering at El Jaguar. Here is one captured in the nets at the coffee banding station. As part of the working group project, a unique combination of color bands is put on each Wood Thrush so that individuals can be identified without having to recapture them.

This species has declined an estimated 50% over its broad breeding range since the late 1970s. It is evident to us, having traveled in the Neotropics, that Wood Thrushes require mature forests in the winter. The remarkable forests at El Jaguar by far had the most Wood Thrushes we've seen in our travels. The banding program at El Jaguar (and Finca Esperanza Verde) has shown that individual Wood Thrushes return to the same places each winter. Further studies with new technology indicate that there is strong connectivity between particular nesting regions and specific wintering regions. Since RRBO has a history of working with Wood Thrushes, we are anxious to get involved in this conservation effort seeking to understand the linkages with breeding and wintering areas, and factors important to their survival. (Your donations provide the support to help us in these initiatives!) 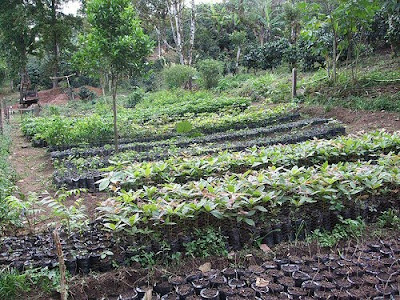 If all that work isn't enough, in 2010, Georges and Lili received a Neotropical Migratory Bird Conservation Act grant, through the US Fish and Wildlife Service and matched by the American Bird Conservancy. This grant will assist El Jaguar in reforesting neighboring farms and help community coffee farmers work towards certifying their coffee with Rainforest Alliance. The photo above shows the native tree nursery that is part of this project. Within the next few years, El Jaguar will have raised and distributed over 20,000 trees! 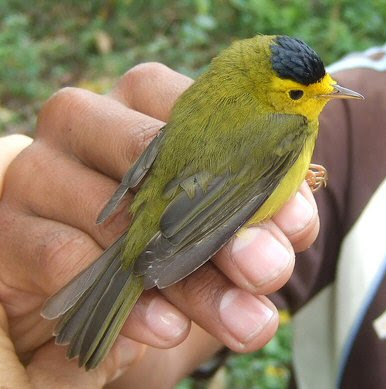 Wilson's Warblers are also amazingly common there. We see them in most coffee farms we visit, and they are one of the few North American migrants that will actually feed in the coffee trees themselves.

Of course, we always like seeing the tropical resident birds. Georges and Lili are now starting a program where they will band throughout the year in order to gather the same type of important survivorship data on resident species. 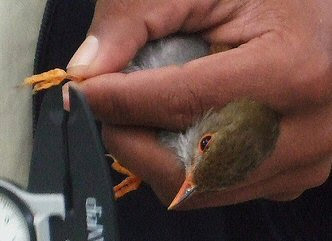 As always, I like seeing the tropical cousins of the thrushes that I study here at RRBO. Here is an Orange-billed Nightingale-thrush (Catharus aurantiirostris) getting measured. 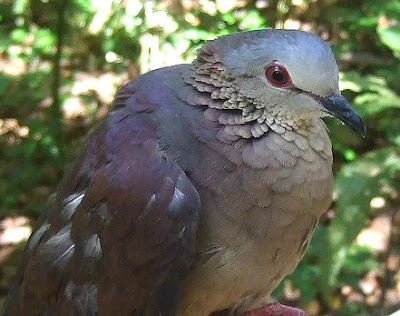 Quail-doves are notoriously hard to see. This White-faced Quail-dove (Geotrygon albifacies) was captured in the forest nets. Due to the efforts of Georges and Lili, and their son Jean-Yves, to educate the surrounding community, elusive forest birds that are typically scarce because they are hunted are much more common and relatively easy to see at El Jaguar. On the short trail behind our cabin, we saw Violaceous and White-faced Quail-doves (Geotrygon albifacies), and had drop-dead looks at a strolling Little Tinamou (Crypturellus soui) and Highland Guans (Penelopina nigra). 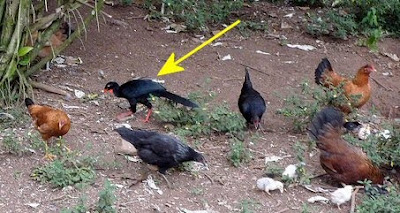 We didn't do as much hands-on banding at El Jaguar as at Finca Esperanza Verde. They use a different protocol at El Jaguar, and while I am familiar with all the extra measurements they take, the young Nicaraguans who help Georges and Lili could process birds way faster. 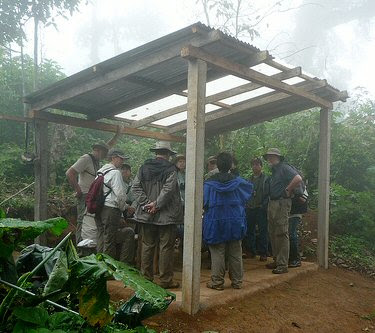 Hopefully, I came in handy interpreting the banding and conservation projects to this group that came for a visit.

In trying to make ourselves useful, we also spent time working on putting together a dragonfly list for the property. 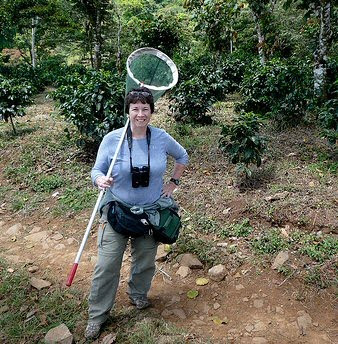 We only brought one net, so Darrin did all the catch-and-release. I just posed with the net, but did a lot of ID work. 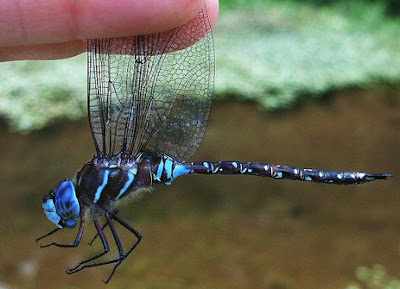 We were able to find and identify over a dozen species, including this very gorgeous Rhionaeschna jalapensis.

We also photographed and identified over two dozen butterfly species, many of which were new for the El Jaguar list. 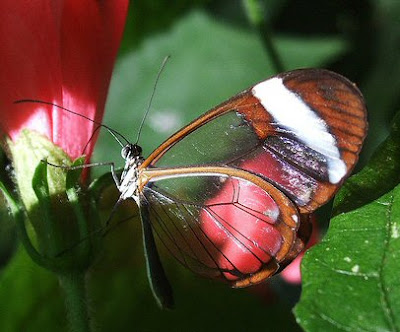 We took perhaps eight photos of clearwinged butterflies, which turned out to represent seven different species and several families! This is Greta morgane oto.

We are still working on compiling our lists for Georges and Lili (and then could use a vacation from our vacation). It was a productive trip, and if anybody is interested in the logistics of travel to Nicaragua or El Jaguar, feel free to drop me a line. Here are a few links that may be of interest as well: 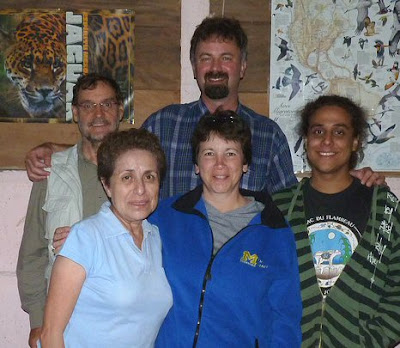 Thank you Georges, Lili, and Jean-Yves!