On April 16, a Wild Turkey was reported on campus. It was seen twice at Fairlane Estate, once at the feeders behind the EIC, and I found a track at the north end of the lake (right). For one morning, this bird really got around!

Wayne County has had many turkey reports in the last few years, mostly from Sumpter Township and nearby areas in the southwestern part of the county. These probably originated from the successful re-introduction and restocking of turkeys by the Michigan Deptartment of Natural Resources in northern Monroe Co. Back when RRBO was working on the Michigan Breeding Bird Atlas, we obtained data on the relocation of nearly 150 turkeys from Barry, Cass, and Washtenaw counties to Monroe County (a few to St. Clair County) between 2002-2005.

Over the past winter, it seems like turkeys were on the move. Reports came from Belle Isle and near Willow Run airport. This spring, there more reports from Willow Run and environs, and on April 26, someone photographed a turkey on a fifth-floor window ledge near Ford Field in downtown Detroit! I suspect Detroit-area birds come from Canada, including from Fighting Island in the Detroit River, where a large flock has been released. And now Dearborn joins the list of Wayne County communities with a turkey sighting.

I did not include Wild Turkey in my book on Dearborn birds; they did occur here historically, but the book included only those species with specific documentation. Most long-time Dearborn residents are familiar with the pioneer memoir of William Nowlin, The Bark Covered House. Although Nowlin's circa 1840 homestead was just outside Dearborn city limits, it no doubt depicts the turkey situation in the region at the time.  In one passage the author notes,


"Sometimes I would rise early in the morning and go out of the door just at daylight. ... I would listen to see if I could hear the gobbling of the wild turkeys. I hardly ever failed to hear them, sometimes in different directions. I frequently could hear two or three at once."

Alas, by the turn of the 20th century, Wild Turkeys were pretty much gone from Michigan, primarily from overhunting. In the 1950s, a program was initiated to reintroduce turkeys into Michigan. The state population is now around 200,000 birds. An interesting side note: occasionally, one sees grayish or whitish turkeys, which some people believe means wild turkeys have interbred with domestic turkeys. In fact, this is an uncommon genetically-linked color form that was brought to southern Michigan from turkeys relocated from Iowa in the 1980s.

Perhaps ironically, the MDNR is now moving turkeys from southern Michigan to northern Michigan to both bolster populations and to rid urban areas of "nuisance" turkeys. Admittedly, turkeys are very large birds that can do a bit of damage scratching in gardens. And their poop is pretty big, though not as voluminous and messy as goose poop, in my opinion. But despite periodic horror stories, Wild Turkeys are pretty wary and urban areas really don't provide adequate habitat for them.

Nonetheless, the situation reminds me of all the efforts to re-establish and foster populations of White-tailed Deer or Canada Geese, which are now over-abundant and troublesome in many urban areas. I wonder if stories like this will become more common, and what the fate of Wild Turkeys in populated areas will be if their populations flourish. 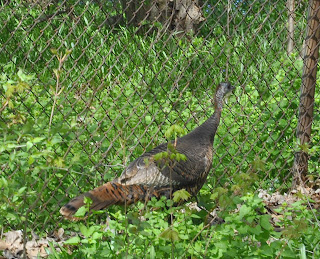 A (the?) hen turkey was seen again along Fairlane Drive near the old stone cottages on May 2, where Dr. David Susko took the photo at left. There was a very large outdoor event on campus that day, so she probably didn't hang around, but this seems to indicate that she may be hanging around the area.