One of the presentations I attended at an ornithological meeting earlier this year was "Cats and fat doves: resolving the urban nest predator paradox." The project is looking at nest predators in urban versus rural areas, and if and how they differ.

This particular study used Northern Mockingbirds in Florida as subjects. Mockingbirds are to Florida what American Robins are to Michigan as far as common nesting yard birds are concerned. The researchers located dozens of nests and put cameras on them. These cameras included the ability to monitor the nests at night.

Although Cooper's Hawks were present at all the urban sites, they are not major nest predators of mockingbirds in urban settings, but tend instead to eat abundant, profitable, and easy-to-catch prey -- usually doves and pigeons.

The main nest predator in urban/suburban areas, accounting for 70% of nest predation, was house cats (see this chart). This didn't surprise me, but just reinforced what we know about outdoor cats: they are extremely effective predators of birds and other small wildlife. Also not too surprising was that the surveillance showed that cats were very adept at climbing the trees and raiding the nests.

The other aspect was that 94% of the cat predation took place at night. 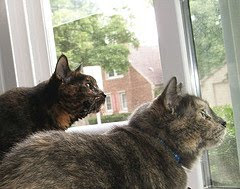 So please, keep your cat indoors. This is especially critical during the breeding season and at night.

My cats Sophie and Juniper are strictly indoor cats. Everyone is happy: the cats, the birds, and us.

Update: Shortly after I wrote this, The Wildlife Society and the American Bird Conservancy put out a joint press release to remind people that this is a particularly critical time to keep cats indoors. You can read it here.
Posted by Julie Craves 2 comments:
Email ThisBlogThis!Share to TwitterShare to FacebookShare to Pinterest
Labels: Birds and bird surveys