Well, this week was nothing to write home about. Only 39 new birds were banded in 3.5 mornings of banding. It has been dry, dry, dry in the banding area. While it's nice not to get wet feet or be bothered by mosquitoes, foraging opportunities are reduced in a drought. Fruit development is a bit delayed as well. With rain forecast this morning, I walked the standard survey route rather than open the nets. There was more insect activity near the Rouge River and by Fairlane Lake, although overall it was still quiet. I'll be periodically updating the running totals for the banding season in the right sidebar.

I recaptured both of the molting Tennessee Warblers from last week, and their feathers are coming along nicely. My only new migrant was an Ovenbird (Seiurus aurocapilla), a personal favorite. 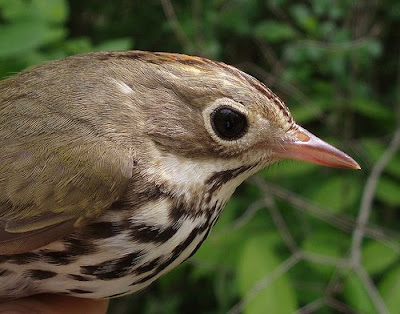 There are several species that we capture that we release unbanded. One is Ruby-throated Hummingbird (Archilochus colubris). A special permit is required to band hummingbirds, and a project involving them is outside my focus of research. This time of year, most of the ones we catch are immature/female-plumaged birds. 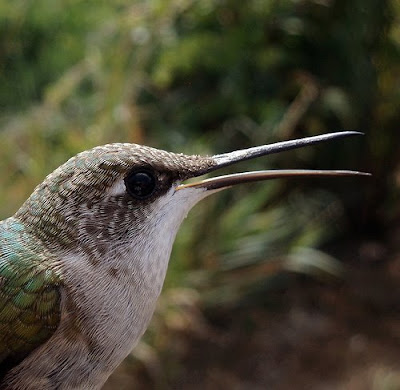 The one above was in fresh plumage; I think most of the adults will still be molting, like the adult male below. He was a bit bedraggled looking. 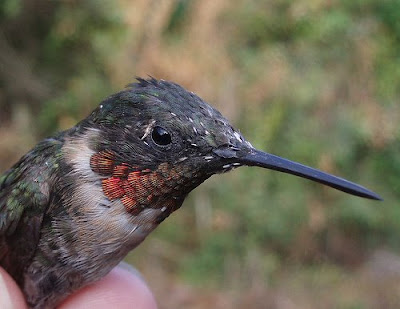 Once again, Gray Catbirds made up most of the catch, and represent half of all the birds handled so far this fall. The pace has been a little slower than most of our fall season starts, but should pick up soon. I'll be back at the nets after the holiday weekend.
Posted by Julie Craves 1 comment:
Email ThisBlogThis!Share to TwitterShare to FacebookShare to Pinterest
Labels: Banding

The week in review

Our short week of banding wrapped up with 55 birds being captured, 44 of them new birds. Most were catbirds. I did recapture an adult first banded in 2006 (as well as a Song Sparrow also banded that year). But the majority were young birds. The baby catbirds are still sort of cute, but will soon look really scruffy as they molt into their adult feathers. 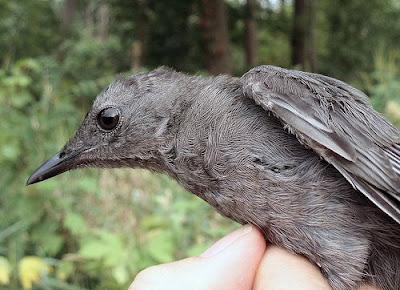 The first Wilson's Warbler of the season was in the nets today. Their typical fall arrival date here on campus is 29 August, but the earliest date we've recorded them is 18 August. It's not too unlikely that they may arrive a little earlier, but we ordinarily don't do much field work on campus in July, so they could be overlooked. If you are interested in extreme and typical arrival dates for the common species in southeast Michigan, pick up a copy of my book, The Birds of Dearborn, An Annotated Checklist. You can have a PDF copy on our desktop in a few minutes for only $5! 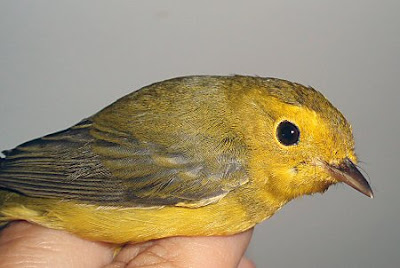 The Wilson's was a young female. In a future post, I'll talk about how we age birds. As for determining gender, the nearly complete lack of a dark glossy cap is indicative of a female, as was the length of the wing. In many songbirds, males have longer wings than females. Although there is overlap in most species, extremes can indicate gender. 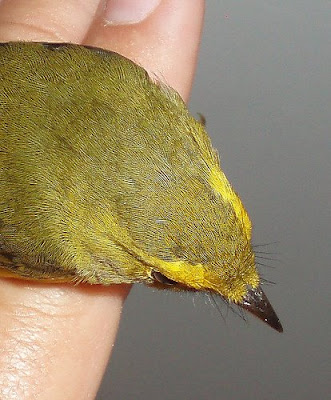 Another thing to notice in the photo above are her "whiskers" which are actually modified feathers known as "rictal bristles." Many birds have them, but they are most well-developed in species that forage for insects on the wing. The flattish bill shape and prominent (for a warbler) rictal bristles prompted Audubon to refer to this species as "Wilson's Flycatching Warbler."

Today I also caught another molting Tennessee Warbler. It was just as sorry-looking as the first one, although it was further along with its molt. The photo below shows the obvious contrast between the fresh new and incoming wing feathers and the three older, worn feathers. 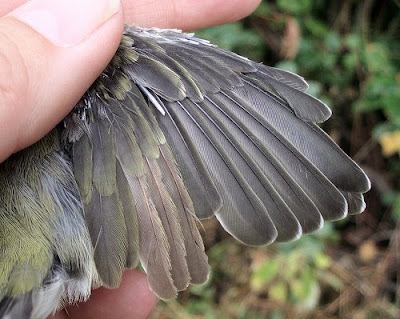 At least, this bird had a tail. One thing we note for all Tennessee Warblers is the extent of the white spot on the outer tail feather. Not all of them have a spot; this one was quite large. It's not certain why there is such variation, but perhaps once we get a large enough sample size, we can see if there is any correlation with age, sex, or some aspect of geographic range. 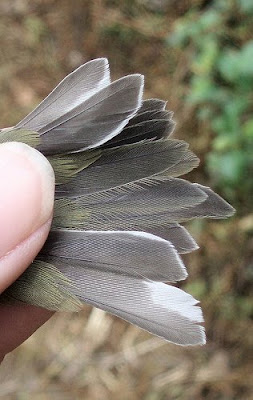 I'll be back at the nets on Monday!
Posted by Julie Craves 1 comment:
Email ThisBlogThis!Share to TwitterShare to FacebookShare to Pinterest
Labels: Banding

Today RRBO banded its first fall migrant, a Tennessee Warbler (Vermivora peregrina). While the majority of migrant songbirds undergo their autumn (prebasic) molt on the breeding grounds before proceeding south, Tennessee Warblers have a different strategy. Adults travel south from nesting areas in northern boreal forests, then stop part-way, and undergo or finish their prebasic molt. About 4% of the Tennessee Warblers banded in fall at RRBO are molt migrants.

This molt is a complete prebasic molt, and includes not just body feathers but also all the flight feathers. As you can see, this bird is pretty pathetic looking. 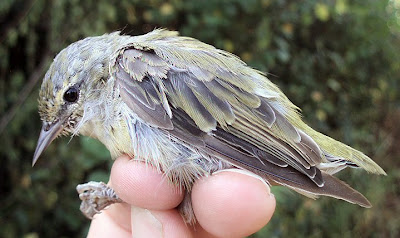 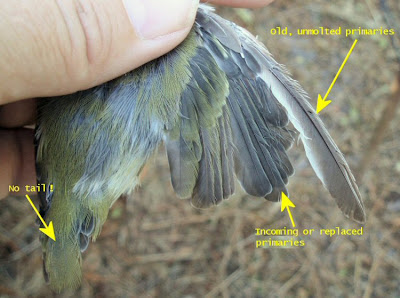 At RRBO, we record the extent of molt on every bird. The number of body feathers being molted are scored on a 3-point scale, and we note the number of each molting flight feather. Over time, this gives us a great idea of the local annual timing of molt for the bird species we band.

Molt migration is common in waterfowl, and more common in songbirds in the western U.S. The other common molt migrant here is Swainson's Thrush (Catharus ustulatus); about 2% of RRBO's fall birds are molt migrants.

Today was the first day of RRBO's 16th fall banding season. Unfortunately, it was pretty breezy this morning, so I was only able to open a handful of our most protected nets. We have a strict weather policy that guides us as to when it's safe to open the nets. Young birds are especially vulnerable to getting wing sprains if they are caught in a net that is moving around a lot in a breeze.

And young birds are always the first order of business the opening days of a fall season. Today was no exception. Of the 18 birds that were captured this morning, only one, a robin, was an adult. The rest were youngsters, including 15 Gray Catbirds. This is our #1 species, with over 3200 banded since 1992 (nearly 40% are recaptured, many multiple times).

This is how it will go the rest of the week. I'll open different nets in various sections, and catch many of the resident birds. Then things will quiet down until migration begins in earnest.

Meanwhile, it's time to enjoy the catbirds!
Posted by Julie Craves No comments:
Email ThisBlogThis!Share to TwitterShare to FacebookShare to Pinterest
Labels: Banding 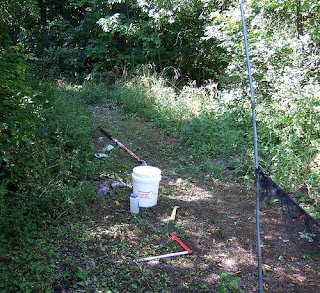 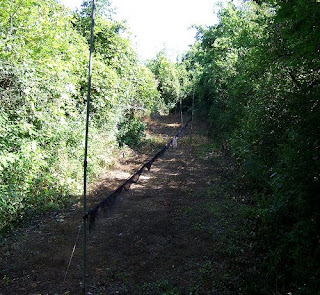 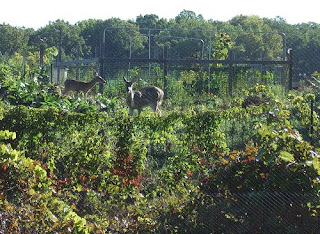 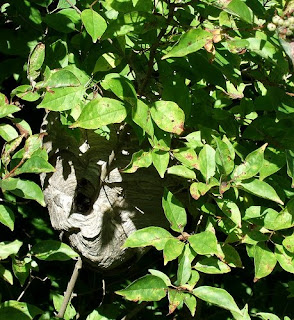 Much as I loathe it, I'll have to get rid of the nest before I can finish up and start banding. We'll be ready to open this week!
Posted by Julie Craves 4 comments:
Email ThisBlogThis!Share to TwitterShare to FacebookShare to Pinterest
Labels: Banding
Newer Posts Older Posts Home
Subscribe to: Posts (Atom)