One of our research projects at RRBO is a joint project with Dr. Melissa Bowlin, a faculty member here at UM-Dearborn. Last fall, we placed light-level geologgers (or geolocators) on a sample of Gray Catbirds on campus. Catbirds are one of our most frequently banded birds. These tiny devices measure light several times daily. If placed on a migrating bird, they will record data that can be used to calculate latitude and longitude when compared with sunrise and sunset times and light levels at noon in different geographic locations.

This data can give us a wealth of information on the pace and route of migration, and wintering areas. You can read all about how they are used on the RRBO web site.

There is a catch (pun fully intended). In order to get the data, the bird must survive a full migration, return to the original banding location the next year, and be recaptured so the geolocator can be removed and the data downloaded. Last fall, we placed a colored leg band on each of the catbirds which also carried a geolocator, so we could more easily re-find any birds that returned this year.

Well, I couldn't have been happier to find one of our color-banded catbirds singing right behind the Environmental Interpretive Center (EIC). Once I was sure he was going to stay put, I set up three nets between two of his favorite singing perches. While I was setting the nets up, I caught a catbird I presumed might be his mate. It was banded, and turned out to be a bird we banded as a hatching-year bird in August 2008.
Very early the next morning it was time to try to catch "the" bird, and Dana Wloch and Darrin O'Brien joined me. Often, territorial male birds will investigate another singing individual of his own species. We placed an iPod playing a loop of a singing catbird behind one of the nets. Sometimes that's enough, but it usually helps to have a stuffed "singer" near the recording. I didn't have a stuffed catbird handy, but I did have a study skin of a European Starling.  He'd have to do.

Once we were set up, it was step back and wait. Our target catbird began singing, and he came in closer to the nets to investigate. Within minutes he swooped over one net, and over the next. Then again. And again. Uh-oh. These nets are kind of hard to see, but it looked like our bird had figured out our ploy and was avoiding them.

After about 10 minutes, the catbird flew from behind one net headed back to his usual singing spot and ventured a little too low. Bingo! In the net. We quickly retrieved him.

It didn't take long to take him into the banding lab, remove his geolocator and green band (so we didn't go after him again), and take some measurements so we could let him go.

This catbird, which was carrying geolocator #929, was the last catbird we put a device on last fall, on 29 September 2011. The bird had originally been banded as an adult on 10 August 2010.


Dr. Bowlin is out of state on another field study, and when she returns she will download the data from the device. Then, it will take some additional time to analyze. Sometimes due to weather or time spent in shaded spots by the birds, the data may difficult to interpret. Hopefully, we'll get good data from this bird, as well as any other catbirds that return that we recapture.

And we have already located the favorite singing perch of another color-banded catbird. I hate to report that we have tried catching this bird for several days and have come pretty close, but so far he seems to be on to us and prefers singing about 10 yards from the nets. We also have a tentative sighting of a third bird, and have some areas left to survey for catbird pairs. I'm optimistic we will be able to retrieve a few more geolocators this season.

About half of our catbirds were sponsored by donors last fall. Unfortunately #929 did not have a sponsor, so we didn't get to provide fun news to one of our supporters. If you are interested in sponsoring a catbird with a geolocator, I'll assign one to anybody making a gift of $300 or greater.

The North American Migration Count takes place the second Saturday each May. It aims to take a "snapshot" of migration, and is compiled on a county basis. My husband Darrin is the coordinator for Wayne County, and as usual we covered the city of Dearborn together on May 12.

Spring migration this year got off to a great start the first week in May. We had very good numbers of early migrants the last week in April into the first week in May. There was a nice influx that included some mid-season migrants on May 3. Within a few days, however, things began to slow down. On migration count day, we tallied a disappointing 70 species on campus. Warblers in particular were very scarce, with only ten species. Yellow-rumped Warblers had been dwindling, but were absent on count day. Many people commented on the high numbers of White-crowned Sparrows this season, but on count day we had only a few, and no White-throated Sparrows. Our best bird on campus was a Gray-cheeked Thrush, the first of the season.

We added eight more species at other locations in Dearborn. The original Ford "sunflower field" at Hubbard and Southfield had a minimum of two dozen Bobolinks on May 7, but none stuck around for the count.

The best bird of the day was an Orchard Oriole at Porath (Kielb) Park. This 11-acre property in a sparse residential area adjacent to railyards and an industrial border of Detroit was once a clay mine for bricks. In the 1940s, fill material from construction of I-94 was added. A federal brownfields grant was used to clean up contamination (still no digging allowed, according to warning signs) and it was turned into a park by the city in 2005. There are a variety of native plants there, but aside from a trail that is mowed through it, the park has not been maintained very well and it's becoming weedy and overgrown.

In addition to the oriole, Porath had two very good butterflies. One was a Common Checkered-Skipper (Pyrgus communis), a southern species that has been seen in southern Michigan with increasing frequency the last few years. Not only is this an uncommon species, this is a pretty early date to see them here. It's unlikely that the larvae (the stage in which they hibernate) can survive here overwinter, so the individuals we typically see are migrants from the south, or perhaps some progeny from these migrants which appear later in the season. Their host plants are in the mallow family, and I have seen them most commonly in vacant lots or neglected fields that are infested with velvet-leaf (Abutilon).

We also saw another uncommon butterfly, an "Inornate" Common Ringlet (Coenonympha tullia inornata) When we found our first county record in 2003, it represented a substantial southern range expansion in the state (PDF of my note in the newsletter of the Michigan Entomological Society here). This species now shows up all over the place in southern Michigan, moving south here as it has in New England and Ontario in the last decade or so. I failed to get a photo, but here's one Darrin took last fall in Oakland County. 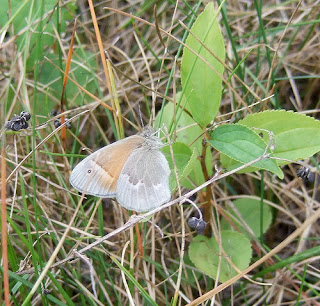 Both the skipper and the ringlet have been observed on the UM-Dearborn campus as well.

A table of results from the Wayne County North American Migration Count, with links to complete results, is available on the RRBO web site. Once we have data from all the other field participants, I'll put up the 2012 results at that location as well. 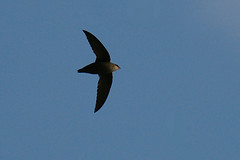 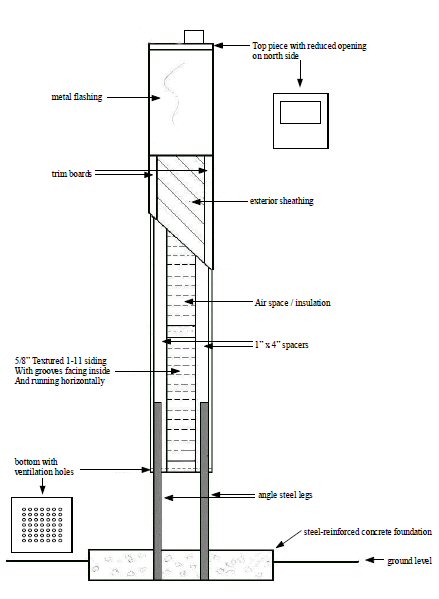 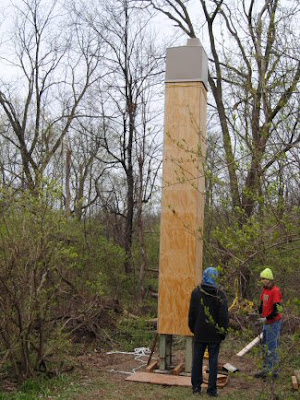