The 23rd year of RRBO's Winter Bird Population Survey has been completed. December started out pleasantly but the survey season ended with a snowy and bitterly cold February. Weather aside, it was a fairly average year. The 14 survey days over the late December to late February period was typical. Surveys totaled about 23 hours, which is 6 hours below the 29 hours that are average, but represent the shortage that took place on our Christmas Bird Count day.

The 34 species tallied was a little below the 22-year average of 38, but can be partially explained by some habitat changes and restrictions. Access to the Rouge River behind Fair Lane Estate was greatly restricted due to being fenced off for riverbank restoration; vegetation along this area also removed. The river was frozen much of the period, and no waterfowl were counted after January 1. No Belted Kingfishers were recorded; they have only been completely missed on a few other counts.

Despite the availability of feeders, most sparrows were recorded in numbers well below average. Only a single Song Sparrow was recorded, while the previous season total average is 13. One or two American Tree Sparrows were recorded several times, but the previous season total average is 34. White-throated Sparrows have been common winter residents here, especially over the past decade. A total of 25 were counted this year, with an average per survey of 1.7, the lowest numbers since 2002. The previous 22-year means were 80 per season and 6 per survey; these averages since 2003 were 157 and 9. Juncos were also counted in below average numbers, although not as drastic. I'm not sure exactly what might have contributed to the depressed numbers of ground-feeding seed eaters, except that a lot of understory vegetation has been removed and perhaps there is less cover.

Fruit-eating birds were largely absent. No Cedar Waxwings, Hermit Thrushes, or Yellow-rumped Warblers were recorded. Most days there were no American Robins present, the maximum number on a survey day was 3. This represents the second lowest number of American Robins in 23 years. Fruit-eating species were generally scarce on local winter bird counts this winter, so it's hard to tell what impact the removal of fruit-bearing non-native trees and shrubs that was undertaken by the university may have had on these numbers.

The highlight was probably the Pine Siskins that were present in small numbers through mid-January. They moved on from here (and other places locally) and had not moved back through on their way north by the time the survey period ended. This was the only one of the "irruptive" species present on campus this winter.

All the numbers from this year are on the RRBO web site, along with past counts and the history and methodology of the survey. 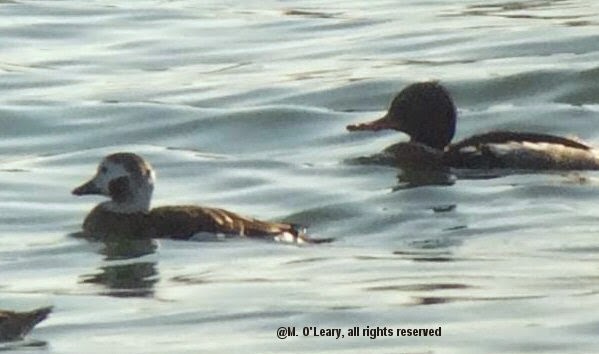