The 20th year of RRBO's Winter Bird Population Survey has been completed. Over the 20 December to 20 February survey period, 39 species were tallied. The previous annual average number of species is 38. We added two species this year. The first was Gray Catbird. I had two on the first count day, 20 December 2011. I was standing and looking at one while I heard another calling. We have only one previous winter record of catbird in Dearborn, and none from campus, so this was quite notable. Single catbirds were reported by other observers several times over the winter. The final observation was by me on 27 January 2012 -- and the bird I saw that day was banded. The bird I was looking at on 20 December was not, and other observers didn't look for bands.

The other new species was a Pine Warbler was visiting the EIC suet feeders on 26 December. This was the second Dearborn and first campus winter record. This brings our cumulative total over the years to 72 species. It's amazing that after 20 years, new species can still be added to this count, but in fact we have added at least one new species every year except 2006-2007. Here is a quick-and-dirty graph of the accumulation of species. 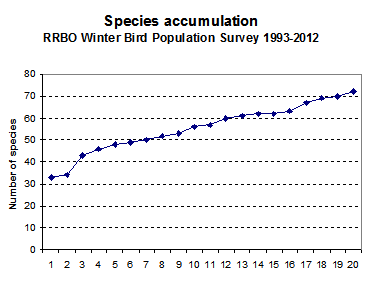 I always check all the tangles along my route, and this year was rewarded twice with a Northern Saw-whet Owl. This may have been one or two birds, as the spots were different. I suspect it (they?) was just passing through, as I looked in the same spots every time, but it was only present in late January. 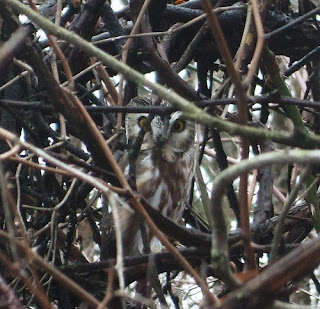 As for misses, Cedar Waxwing was not seen this year, only the fourth year it has been missed over 20 years. Although Pine Siskins and Common Redpolls were recorded several times over the period elsewhere in Dearborn, we did not have any sightings on campus.

American Crow in this immediate area continues to be nearly absent. You can look at last year's post for the story of the precipitous decline and lack of recovery since West Nile Virus (WNV) entered our region. This year I had a single crow fly over on three occasions, all in February when they begin to move around a bit.
There have been 21 species that have been recorded all 20 years on the WBPS, listed below. Those in italics have also been recorded on over 95% of the 278 individual surveys completed over those years:
Canada Goose, Mallard, Red-tailed Hawk, Mourning Dove, Red-bellied Woodpecker, Downy Woodpecker, Hairy Woodpecker, Northern Flicker, Blue Jay, American Crow, Black-capped Chickadee (missed on only a single survey in 20 years), White-breasted Nuthatch, Brown Creeper, American Robin, European Starling, American Tree Sparrow, Dark-eyed Junco, Northern Cardinal, House Finch, American Goldfinch, and House Sparrow.
Let's return to the American Crow again. Although Crows were recorded every year, prior to West Nile Virus, they were recorded on nearly every survey -- in the years 1993-2002, they were present on 97.4% of the surveys. In the years 2003-2012, they have been present on only 24.8% of the surveys. A couple of years, I only recorded them on one day.

This tidbit shows the value of this type of long-term data set for monitoring resident birds. It's critical to have programs like this in place, ready to provide "before" data when some unanticipated natural event occurs, including disease, or to see how bird populations respond to more gradual environmental changes.

So while the crow situation is very sad, it has provided me with motivation to get out there and count. One thing you need to know...I hate being out in cold weather. Of these 278 surveys, probably 270 were awfully routine. But the analyzed results will be worth even more than the sum of all the parts, and I'll be working on a complete summary of the Winter Bird Population Survey now that 20 years have been completed.

On the RRBO web site, you can find the full results of all 20 years of surveys, along with information on the protocol.
Posted by Julie Craves 1 comment:
Email ThisBlogThis!Share to TwitterShare to FacebookShare to Pinterest
Labels: Birds and bird surveys
Newer Posts Older Posts Home
Subscribe to: Posts (Atom)