Dearborn has an interesting winter roost of Black-crowned Night-herons (Nycticorax nycticorax) at a pond near the Rouge River inside the Ford Rouge Plant complex (scroll down in this post for a map and description). Access to this site is restricted, but Mike O'Leary as a former Dearborn police officer and current Ford employee has been able to periodically survey birds, and consequently the night-herons get counted at least once a year on January 1, the day of the local Christmas Bird Count. They were first recorded on the count in the 1980s, and then were nearly annual beginning in 2003. Peak numbers occurred around 2006-2009, when over 30 were found each year. Numbers have averaged much lower in recent years, often around a dozen. They can be very hard to see tucked into the Phragmites and other vegetation, not moving because as their name indicates, they are not really active during the day.

On 23 December 2020, Mike was scounting for the upcoming count when he tallied 8 night-herons at the ugly pond. It wasn't until he was looking over his photographs that he noticed one preening (or sleeping) bird was standing on one leg, and the other leg sported a color marker! When he sent me the photo, I immediately knew this wasn't a new marker, because the letters should have been dark black on a bright yellow band (example here).

The invisible leg would be the one with the standard USFWS metal band with its identifying 9-digit number. However, there is a way to report just a color marker at the federal Bird Banding Lab website, which Mike did immediately.

Mike received a prompt response that the bird had originally been banded as an adult of unknown sex on 29 May 2014 under the banding permit of colonial waterbird expert Dr. Francie Cuthbert at the Detroit Zoo in Royal Oak, MI.

The Zoo has had a colony of nesting Black-crowned Night-herons since around 1997, when the first juveniles were found there by Doris Applebaum; this was the first documented breeding of this species in Oakland County. At least 6 nests were found the following year. In recent years the Zoo has had as many as 50 pairs. This is one of the significant colonies in the Great Lakes and I believe the largest inland colony in Michigan (see a map of colonies on page 12 of this Audubon Great Lakes waterbird report). These birds have been banded and/or color-marked for a number of years.

Once again, Mike comes through with a great, interesting bird find in Dearborn!

Many years ago, a group of Dearborn birders and RRBO banders submitted lists of the five bird species they thought might be the next to land on the Dearborn bird checklist*. I don't even need to dig it out to know that American White Pelican (Pelecanus erythrorhynchos) was not on that list.

On the evening of 16 October 2020, Mike O'Leary happened to be outside when 12 pelicans flew south over his yard. The Dearborn checklist now is now 266 species (which includes two extirpated and two hypothetical species).

Perhaps if we were compiling that list today, one of us might have thought to add pelican. This species has undergone a remarkable expansion in the Great Lakes over the past decade or so. Take a look at these two maps from eBird, showing reports from southern Michigan. The first map has all the sightings from 1900-2000 and the second just the past 20 years (with the caveat that eBird only launched in 2002, although many historical sightings have been added). 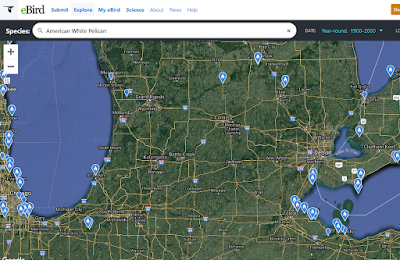 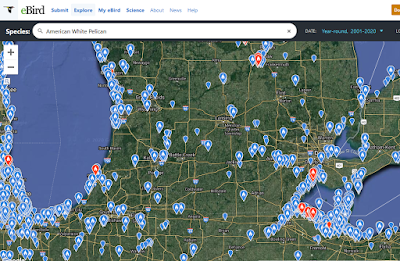 *As a reminder, you can download the most recent (2019) annotated Dearborn checklist for $5. Applicable for most species for all of southeast Michigan, it gives residency status, relative abundance, and dates of occurrence for over 260 species. You can read the details about how the data were collected and what is presented in this blog post.

You can go to the download page here. You will find the 2019 version as well as the 2007 version, which contains maps, some photos and illustrations, and other material. A description for each is available by clicking on the titles; there is also an option to purchase both for a discounted price.

Common Gallinule (Gallinula galeata, formerly Common Moorhen, G. chloropus) is a wetland bird seen only once in Dearborn, along the Rouge River on the University of Michigan-Dearborn campus on 15 May 1983 by Jim Fowler, Jr.

On 3 May 2020, Mike O'Leary got a phone call from a friend about a strange bird in his west Dearborn back yard. Lo and behold, a gallinule: 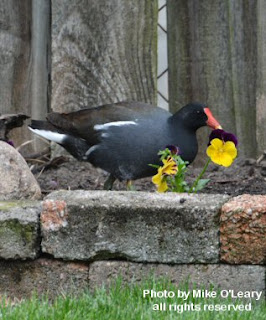 This yard is in a dense residential area, a small space with no pond, or any type of wetland for a significant distance. It's not too unusual for birds in the rail family to land in wildly inappropriate habitat during migration. This bird appeared healthy and was able to fly, and was gone by the next day. This species is currently designated as Threatened in the state of Michigan. I am the chair of the state technical committee which reviews and develops the endangered and threatened species list, and based on recent data, we will be recommending it retain this status for the next list update.

As a reminder, you can download the most recent (2019) annotated Dearborn checklist for $5. Applicable for most species for all of southeast Michigan, it gives residency status, relative abundance, and dates of occurrence for over 260 species. You can read the details about how the data were collected and what is presented in this blog post.

You can go to the download page here. You will find the 2019 version as well as the 2007 version, which contains maps, some photos and illustrations, and other material. A description for each is available by clicking on the titles; there is also an option to purchase both for a discounted price.