RRBO is in its second full year of sampling birds for avian influenza. There are many different subtypes of "bird flu," most of which are mild "low pathogenic" avian flu viruses which are not dangerous to humans. The type of bird flu often in the news is the highly pathogenic subtype H5N1, which causes high mortality in domestic poultry. It has not been found in migratory songbirds in North America.

The Landbird Monitoring Network of the Americas (LaMNA; RRBO is a charter member) and UCLA's Center for Tropical Research initiated a program in 2006 to learn more about the identity, frequency, and geographic distribution of virus sub-types and strains carried by landbirds. Sampling for avian flu is done at migration monitoring stations such as RRBO, breeding bird stations (Monitoring Avian Production and Survivorship, or MAPS), and wintering bird stations in Latin America (Monitoreo de Sobrevivencia Invernal, or MoSI).

Sampling only takes an extra minute during our banding process. It consists of taking a very tiny sterile swab and sampling cells shed from the intestines at the entrance to the cloaca. The tip of the swab is cut off and placed in a vial of preservative. Two tail feathers are also taken. These can be used in stable isotope analysis, which can give us an idea of where a bird nested. Identifying the breeding areas of birds will help researchers map out where certain strains of virus originate. 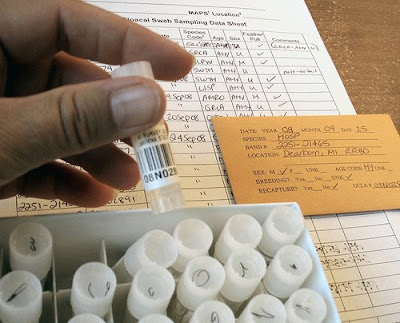 Since beginning this project, RRBO has contributed over 300 samples of nearly 50 species. Some are migrants, and some are residents. For many years, we didn't band House Sparrows, beginning during a period when the band size they take (shared by abundant migrants such as thrushes, White-throated, White-crowned, and Song Sparrows) was in short supply. Now they are a valuable species to sample for viruses due to their communal nature and urban haunts. Here's a young male House Sparrow who donated a few cells and two feathers to science. 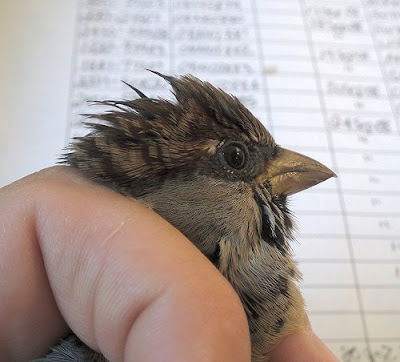 Sampling will continue through fall here on campus. Then I'll sample at my nearby home to use up any remaining vials -- I'm one of the only banders in the state that provides winter samples to the project.

This is just another way RRBO is making a contribution to a wider understanding of birds in North America. To learn more, check out these links:

Posted by Julie Craves
Email ThisBlogThis!Share to TwitterShare to FacebookShare to Pinterest
Labels: Other RRBO projects