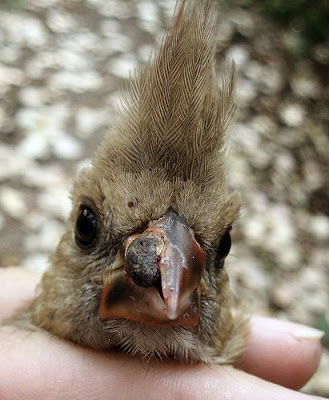 The other day I banded this HY (hatching-year) cardinal with a bill tumor. It looks sort of like a scab or blob of gunk stuck on the bill, but it's actually growing out of the tissue near the base of the bill. The dark coloration of the rest of the bill is normal: young cardinals have dusky-colored bills well into fall. It's one of the easiest ways to tell a juvenile from an adult.

Bill tumors and other deformities are not terribly uncommon. They often are seen on young birds, probably because many of the deformities ultimately impact survival. Most tumors I have seen have been due to a virus called avian pox. As I wrote on the RRBO bill tumor page, avian pox most frequently causes lesions on the feet and legs of birds, but also affects other soft parts. Pox lesions are scabby, crusty, or warty growths. If near the nostril they can obstruct breathing, or can obstruct vision if near the eyes. The lesions fall off after about a month when the virus runs its course, but it appears they can sometimes compromise the bill structure -- some post-pox birds have chunks of bill missing. This may not be due to the pox itself, but might be due to secondary infections of the pox lesions. Pox can be spread by mosquitoes, or contact between birds (thus it can be spread at feeding stations).

Bill deformities such as crossed bills are a whole other matter. Many years ago, upon capturing a catbird with a crossed bill, I did some research, and ended up publishing a paper on the incidence of bill deformities in passerine birds (songbirds) in North American Bird Bander. Since then, I have kept a compilation of these kinds of deformities in songbirds on the RRBO web site. Many have been contributions from banders and people who have seen the information on the site (I moderate a group on the photo sharing site Flickr on bill deformities which includes all types of birds, not just songbirds).

It is hard to say whether these types of deformities are increasing, or if awareness is just elevated. However, there is one geographic region where something is definitely going on: the Pacific Northwest and in particular Alaska. The USGS's Alaska Science Center has devoted a section of their web site to these abnormalities, many showing up in chickadees.

The USGS Alaskan researcher, Colleen Handel, cited my paper and the RRBO web site several times in her presentation on "The mystery of the long-beak syndrome" at a recent ornithological conference. Colleen and I have discussed these deformities several times over the years, and are planning on collaborating on a paper next year.
Posted by Julie Craves
Email ThisBlogThis!Share to TwitterShare to FacebookShare to Pinterest
Labels: Banding, Birds and bird surveys, Research news

Hi Julie, About two weeks ago while near the old tennis courts by the Ford Mansion, Betty and I heard a strange bird. It turned out to be a strange sounding Blue Jay that did not have any any crown feathers and looked to be missing other feathers on its head. Last week a female cardinal was at our feeder with bulging eyes and most of its head was without feathers. You said that birds are an indicator of our environment. I wonder about other things? Why has people had poor luck with tomatoes the last few years? Why is the taste different and the skin so thick? It's time for the Monarchs to migrate and I haven't seen but one all summer. There are less butterflies around our Butterfly bushes. There appears to be less crickets around my house in Dearborn. Last week for several consecutive days in the evening I had spotted two foxes along the edge of Snow woods between Snow and Oakwood. Twice I observed one cross Rotunda to go over to a Ford Building, sit on its haunches for awhile and then cross back. Subsequently both were killed within three days by cars. It seemed to be odd behaviour. I wonder what is going on in our natural world. Thought I'd give you a little input from my perspective. Thanks so much for your dedicated work. Joe McMahan

Hi, Joe. Let me briefly address some of your observations.

Bald birds -- this is common and normal. Here's a link.

Monarchs are indeed scarce this year. Here is some insight from the folks who run the tagging project in which we participate.

Tomatoes and crickets -- My coworkers, neighbors, and I would actually say that we've had an over-abundance of tomatoes and also a very nice diversity of crickets and other "singing" insects this year. I've had several new species in my yard this year. I get MANY questions similar to this -- folks who have an increase or decrease in some creature in their yards. Unless it's widespread and carefully documented, it is pretty difficult to generalize or draw any conclusions.

As for the foxes, they probably do not have a large enough area in Snow Woods to support them. These were likely young ones forced to "emigrate" with no place to go.