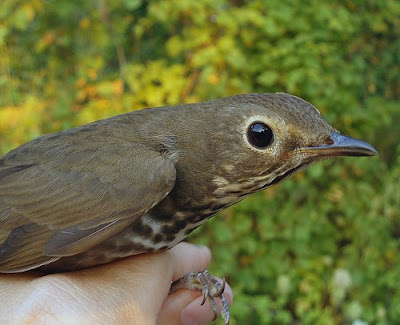 Many new species of migrants are coming through this week. Today I banded the first Swainson's Thrush of the fall season. I am really looking forward to thrush migration this year. The three most common species of migrant thrushes here -- Hermit, Gray-cheeked, and Swainson's -- are the subjects of a major paper I recently had accepted to the peer-reviewed Wilson Journal of Ornithology:

I analyzed weight and fat data for over 2,000 individual thrushes banded here at RRBO during the fall seasons 1992 to 2006. I used both a regression analysis for all initial captures, and recapture data to examine weight and fat changes in these birds as they used our site as a migratory stopover.

In the paper, I present and discuss a number of different findings. Among them, the majority of individuals of all three species gained significant fat and weight during their stopover on campus. This is especially important because in an urban site such as this one, migrant birds are faced with unique challenges, including a high level of human disturbance which may decrease foraging opportunities, and a preponderance of non-native fruits.

These thrushes rely heavily on fruit during fall migration. Much of the native fruit, to which they are evolutionarily adapted, has been depleted by other species by the time the bulk of the thrushes move through, in particular Hermit Thrushes, which are late migrants. The remaining fruits are predominantly introduced, invasive species such as buckthorn and honeysuckle. 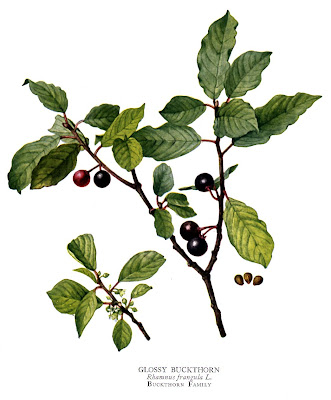 My findings have conservation and management implications. It suggests that thrushes are in fact able to find sufficient resources in urban natural areas similar to our site. Since thrushes gain mass on a diet high in non-native fruits, it demonstrates that some introduced plants do perform ecological functions.

The next question are which fruiting plants and shrubs commonly found in urban areas -- both native and introduced -- are most important to migratory birds? What is their relative availability? If highly invaded urban natural areas are to undergo restoration efforts, which introduced plants should be left to provide resources for migrant birds while native plants become established? In a future post, I'll talk about exactly how we intend to shed some light on those questions with ongoing research!

The vast majority of published papers on stopover ecology have focused on coastal or rural sites, and frequently cover a study period of only 2 or 3 years -- the length of time a graduate student takes to complete a degree. RRBO's work is unique with its focus on an urban, inland site, and especially its long-term nature. It's not enough to catch some birds and see that they've gained some weight between captures. There are many pitfalls in designing studies and gathering data that can be used to draw statistically and biologically significant conclusions. Large data sets are needed to account for many extrinsic variables (such as weather) and weed out ambiguous or problematic data points. I have raw data for a suite of other species besides the thrushes. At some point, they will also be run through the analytical mill, but first I'll be concentrating on the thrush and fruit connection. Stay tuned!

Great work Julie! Keep it up. Although, because of my hatred towards invasives I'm almost sorry to hear that buckthorn is helpful to migrants.

Thanks, Mark! Of course, I won't be advocating preservation of buckthorn, but it might be that leaving some, temporarily, is better than removing all fruiting shrubs if replacements will take time to set fruit themselves.

And sincere thanks also for the contributions you personally made to the success of RRBO. Wish you were still here.

Fantastic! I'm glad to see that you continue to publish info on the importance of stop over areas. When I'm back banding, I would like to read the report in full. Obviously you know who you two biggest fans are!

The other Dettling Bro

Thanks, Andy, for YOUR many years of service and support of RRBO. Have a safe trip, and see you at the nets when you return!