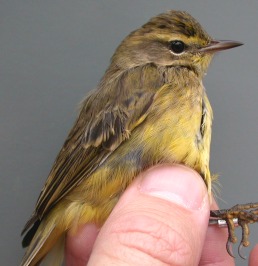 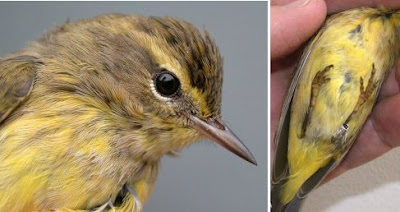 This bird was a hatching-year (or juvenile) bird, based on the incomplete ossification of the skull.  It had no chestnut on the crown, and a fairly short wing, suggesting that it might be a young female.

Eastern Palm Warblers are very yellow in all plumages, while western birds are duller. The supercilium (eyebrow) is yellow, while in western birds the face is much browner, and the supercilium is buff-colored.  The entire breast and belly are yellow in eastern birds, with no contrast between the belly and the undertail coverts. Western Palm Warblers have buff bellies (which can be washed with yellow in fresh plumage) which always contrast with the brighter yellow undertail coverts.

Since this record, four more “Yellow” Palm Warblers have been recorded in Dearborn.
Two were sight records. One was along the channelized portion of the Rouge River on 5 Apr 2006, seen by Cathy Carroll; this is the earliest recorded spring arrival date for Palm Warbler in the city. The second was seen on a regular spring bird survey on campus,  29 Apr 2009, by Julie Craves. 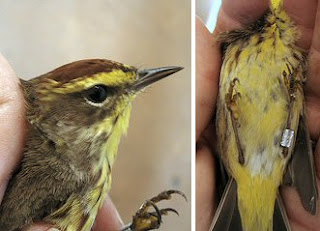 Two more “Yellow” Palm Warblers have also been banded. The bird on the right was banded on 6 May 2008.  Note the bright yellow supercilium and the chestnut coloration of the breast streaks, and once again the uniform yellow coloration of the underparts. The shorter wing measurement of this bird could mean it was a female, although the crown patch was quite extensive which is more typical of a male. Thus, to be conservative, we left the bird sex as unknown.

On 9 October 2010, another “Yellow” Palm Warbler was banded (below). This was a hatching-year bird, as determined by the incomplete skull ossification. It had many chestnut-colored feathers in the crown over a broad area, although they were concealed, and a long wing measurement. This indicates the bird was a male. It was as bright or brighter than the 2003 bird, with some of the chest steaks also having a chestnut coloration. 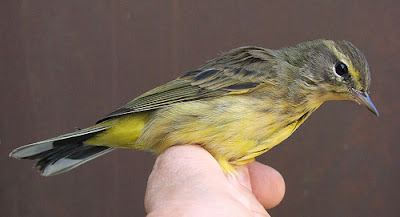 For comparison, here is a typical fall “Western” Palm Warbler, of the form that is typically found migrating through Michigan: 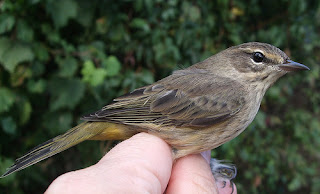