One of the most interesting birds banded this season was not an unusual species, but an unusually old bird. Most small songbirds do not make it through their first year -- they have about an 80% mortality rate. If they make it through their youth, many only live 2 or 3 years. Resident birds tend to live longer than migrant birds, and the farther a bird must migrate each year, the more hazards it faces, and the shorter the typical lifespan.

Indigo Buntings nest over much of the eastern U.S., and winter in the West Indies and Central America, and are therefore considered long-distance migrants. This male Indigo Bunting was first banded as a "second year" bird on 23 August 2003. Thus, it was hatched in the summer of 2002. We recaptured it in May 2006 and May 2007 when it was in breeding condition. This many round trips is pretty remarkable itself.

We caught him again this past week, on 29 Sept. Based on the way age calculations of recaptured birds are made, this makes this bird 8 years and 3 months old -- which happens to be a longevity record for this species in North America, according to the longevity records kept by the Bird Banding Lab. The previous record was an 8-year-old bunting in West Virginia -- a record that stood for the last 48 years. 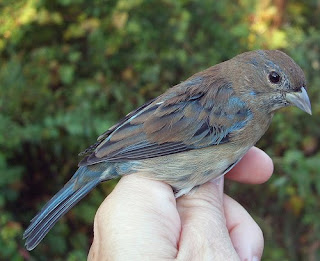 You can take a look at some of the other birds we have recaptured years after their original banding on this page at the RRBO site. Note that on that page, the "age" indicated is the period that has elapsed between captures, not a calculated age.
Posted by Julie Craves
Email ThisBlogThis!Share to TwitterShare to FacebookShare to Pinterest
Labels: Banding, Birds and bird surveys

Wow! He has probably outlived 5 generations of descendants by now.

That's amazing, Julie. Thanks for the link in the umich birders group.

Julie, Nice posting and a very beautiful bird up close. He may be getting used to your facility by now and just stopped by to say Hi enroute to Central America. Michael Wells in Clarkston, Mich.

Who was the original bander, maybe the great ARD?

Julie, how exciting must that have been. Congratulations and it does the heart good to know that a migrant can live such a long life! Beautiful bird, too.

What a great event, post, and photo. This bird simply looks like it's saying "Hi Julie, good to see you guys again!"