Banding took place on five mornings this week, with several marred by the continued invasion of the banding area by deer. We banded 133 new birds of 24 species. The composition was decidedly autumnal: robins, sparrows, and kinglets dominated. An Orange-crowned Warbler and a lingering Blackpoll Warbler were the only warblers banded; Yellow-rumped Warblers remain conspicuously scarce.

There are many hundreds of Common Grackles and Red-winged Blackbirds in the area these days. Thousands are feasting on the sunflowers planted by Ford Motor Co. Large flocks, with a few Rusty Blackbirds mixed in, find their way to campus every day. They favor raiding the oak trees that are near, but not in, the banding area, so we usually don't catch too many. In fact, this was the first red-wing of the season: 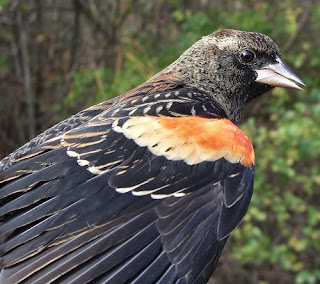 This is an adult male. By next summer, the brown edging on his feathers will wear away, and he will have the jet black look we are more familiar with.

We have only banded about two dozen Brown Creepers since 1992. It is always a treat to get one of these delicate and sort of odd little birds. 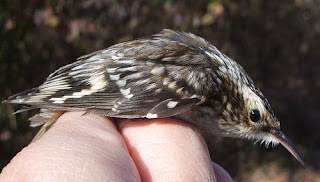 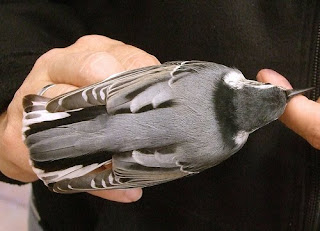 Note the very gray cap contrasting with the darker nape, indicating this is a female.

We are still gathering good numbers of seed samples to determine dietary preferences of birds on fall migration. The composition is changing, with crabapples now showing up in samples as these fruits ripen. Earlier this season, I showed you that seeds are not the only thing we find that birds have consumed. This robin dropping contained a surprise. The dark seed is from Common Buckthorn, the light ones from Amur Honeysuckle. The other object is a jewelry clasp. 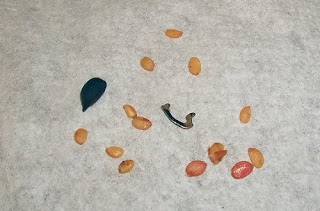 By this time of year, we usually spend quite a few mornings loitering around waiting for frost on the nets to melt, provided we have even been able to open them (they are rolled up when not in use, and can freeze shut). We had our first two frosty mornings of the season this week. It's hard to catch birds when the nets look like bed sheets. 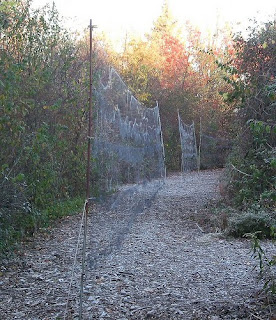 The forecast is once again for mild weather, though, so we don't anticipate frost for the beginning of the week, although wind might be a problem. Somewhere, I have a photo of nets full of leaves....
Posted by Julie Craves
Email ThisBlogThis!Share to TwitterShare to FacebookShare to Pinterest
Labels: Banding