Barn Owls (Tyto alba) are considered extirpated as breeding birds in Michigan. Although I suspect that occasionally a few persist, for the most part the lack of open, fallow land has decimated their numbers across the Midwest, a fate shared by many other grassland species. The fact that Barn Owls were probably very rare prior to Michigan's logging heydays when the state was mostly forested is little consolation for their lack of residency today.

The last (maybe the only) observation of a Barn Owl in Dearborn occurred on 6 May 1951 by Robert E. Mara, a frequent contributor to the Bird Survey of the Detroit Region into the mid-1950s. These surveys provided the basis for Alice Kelley's book Birds of Southeastern Michigan and Southwestern Ontario as well as material for my own books on Dearborn birds. On the original field sheets for the survey, I found Mara's notes:

The image below is from 1949. Mara resided at the Dearborn Inn (1 on the image below), across Oakwood Boulvard from what was (up to 1947) the Ford airport (2) and is now the Ford proving grounds. Many of his surveys were walks he took every Sunday up Rotunda Avenue to the Rouge River. The location of his sighting at Oakwood and Southfield is marked 3 on the map. It's incredible to see the difference 70 years makes! 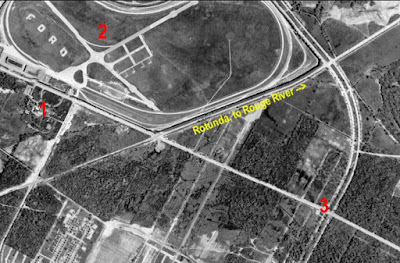 The border between Dearborn and Allen Park is the Southfield Freeway (M39), a much sleepier road in 1951. Mara's sighting of the Barn Owl "in the woods near the intersection" could place it west of Southfield in Allen Park, although he designated his sightings for that day in Dearborn. At the time, Allen Park was not a city but a village of Ecorse Township, and customarily observers designated "Ecorse Twp" on survey forms if that was their location.

Any doubt that Barn Owls occurred in Dearborn was eliminated in 1991 when Jim Fowler, Jr. found a very old Barn Owl skull in a chimney near the clock tower at the Henry Ford Museum; the museum was well-established by the time of Mara's sighting. It was rumored that Barn Owls once nested there, and Jim found the evidence that they were at least present in the area some years in the past.

Postscript: There was a report of a "possible" Barn Owl seen in flight over west Dearborn on 27 June 2008.

Posted by JAC
Email ThisBlogThis!Share to TwitterShare to FacebookShare to Pinterest
Labels: Birds and bird surveys