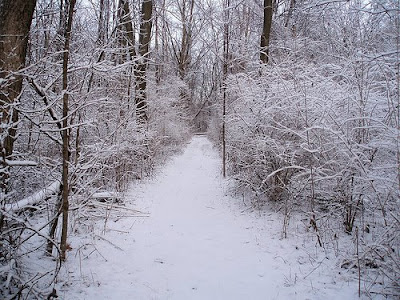 I have always hated winter. I don't like being cold and have always found Michigan summers far too short. But here I am, and when life gives you lemons...you know the story. When I first started working here at UM-Dearborn, I began a standardized winter bird survey. This makes it the longest-running survey by the Rouge River Bird Observatory. I have just completed year number 17. I cleverly called this endeavor the Winter Bird Population Survey, since it was patterned after the Winter Bird Population Study protocol, developed many decades ago. In short, I walk through the campus natural areas roughly twice a week between 20 December and 20 February, always completing my survey before noon, and record every bird I encounter. The final tally includes the average number of individuals encountered per visit (abundance) and the number of visits in which a species was encountered (frequency of occurrence). This all sounds very mundane, and generally it is in the short run. But the beauty in long-term data is often not seen for many years. In 1992, who would have anticipated the importance of counting such a common and ubiquitous species as the American Crow? For an entire decade, I dutifully counted crows, woodpeckers, and chickadees, birds I encounter so often that I sometimes had to concentrate on actually "seeing" them. The occasional Northern Shrike or even Fox Sparrow were much more fun and interesting. Then came West Nile virus and suddenly -- no crows. The profound impact of this disease on local crow numbers would not be quantifiable without the years of baseline data. After ten years of fluctuating but generally stable numbers, the average number of crows per visit was just under 12. The winter after the first breeding season in which West Nile virus occurred (2002), I counted a total of only 18 crows, which worked out to 1.2 crows per visit. I haven't counted double-digits over an entire winter survey period since then. This winter, I only recorded crows on one survey, when I saw four birds. The average for the past seven years has been 0.5 crows per visit, a drop of 96%. 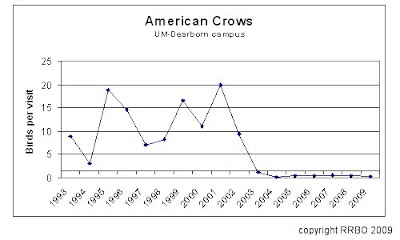 My many years of data have also revealed interesting trends in the numbers of woodpeckers, once ash trees began to succumb to Emerald Ash Borers. I'm also able to look at numbers of overwintering robins and how their numbers change over the course of a season and the decline of American Black Ducks here in winter. Other species don't seem to reveal anything particularly compelling...yet. In the 17 years of the survey, I've averaged 38 species a year. This year I had a record 45 species. Remarkably, four were new to the survey: 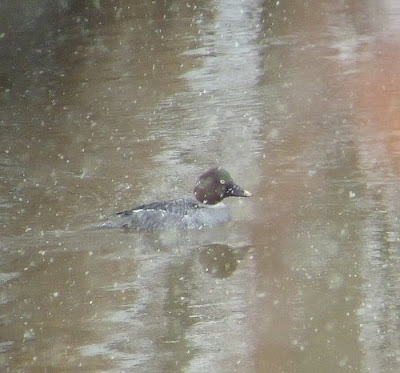 The cumulative total for the WBPS is now 67 species. Thirty-one species have been seen in 12 or more years (70% of the years) and are thus considered our core winter residents. Eleven species have been recorded only once, with the rarest being last year's Hoary Redpoll. I tend to begrudge every time I have to bundle up and spend the next several hours in the cold counting birds. I knew when I started the WBPS that a long-term data set would have applications in tracking numbers of resident birds. But already seeing interesting and relevant results has certainly helped motivate me to get out the door on some of those bitter mornings. Hoping to count crows.
Posted by Julie Craves
Email ThisBlogThis!Share to TwitterShare to FacebookShare to Pinterest
Labels: Birds and bird surveys