A trip to anywhere in the tropics is always high on my list of great things to do. Over the last 7 years or so, my husband Darrin and I have volunteered our time to a number of organizations operating in the tropics -- usually doing bird surveys or otherwise assisting local ecologists. Our newest opportunity will be next week in Nicaragua.

The bulk of our time will be spent in the montane coffee-growing region of Matagalpa. Some of you know that I have a passion for excellent coffee, and write an entire website devoted to the issues surounding sustainably-grown coffee. Coffee grown under shade in an eco-friendly manner is critical for tropical biodiversity, and for so many of the migrant birds that breed in North America and winter in the tropics. Those of you who are members of Cornell's Lab of Ornithology may have seen the recent article on shade coffee in BirdScope in which I was quoted.

Darrin and I have been invited to participate in an on-going bird banding project initiated by the North Carolina Museum of Natural Sciences. In Matagalpa we will be visiting Finca Esperanza Verde (FEV), a shade coffee farm near the village of San Ramon (click on the map to enlarge). We will be banding first with other researchers, and then assisting a group of college students from North Carolina. This project helps to document the birds that use the finca -- both resident species and those that nest in North America but winter in the area, or are on their northbound migration. For example, the most frequently banded North America wintering species at the finca is the Wood Thrush. One of our North Carolina colleagues, Curtis Smalling of North Carolina Audubon, will be working specifically with Golden-winged Warblers. 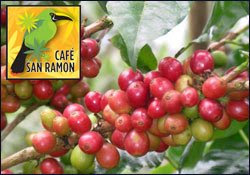 We will not only band birds, but of course also observe and census birds at FEV. Counter Culture Coffee in Durham, NC sources coffee from FEV and other farms in the San Ramon area; coffee from FEV was one of the top ten coffees in the prestigious 2007 Cup of Excellence program. I'll be providing feedback to Counter Culture about the birds on the farm. I'm excited to admit that I assisted Counter Culture with their choice of the Emerald Toucanet as the bird on their Cafe San Ramon packaging (left). Darrin and I have seen this species at other shade coffee farms in Panama, and knew it was on the finca's bird list.

After we leave FEV, we will be traveling back toward the colonial city of Granada, near the shores of Lake Nicaragua. After a few birding stops en route, including another shade coffee farm, we will be settling in for several days at Domitila, a private wildlife reserve. Domitila represents one of the last and best preserved dry tropical forests in the country. At both FEV and Domitilia, we will be conducting insect surveys, focused on dragonflies and damselflies, to assist with the Insects of Nicaragua inventory being conducted by the Museo Entomológico de León (Entomological Museum of Leon). There is still much to be learned about Nicaraguan insects now that the country is peaceful after so much civil war. We can attest that even well-studied countries like Panama turn up surprises. On our last two trips there, we photographed at least one undescribed species of damselfly, and took the first photograph of a live specimen of another species that was described over 30 years ago. Who knows what we might turn up in Nicaragua!

When we return, I will be writing an article on the importance of shade grown coffee to birds, incorporating my experiences, for Birder's World Magazine.

Of course, I will also share as much as I can with you here at Net Results. Be patient: for most of the trip, we will not have Internet access (or electricity, or hot running water!), so I will have to wait to return home to post updates when I am not busy catching up and getting ready for spring migration.
Posted by Julie Craves
Email ThisBlogThis!Share to TwitterShare to FacebookShare to Pinterest
Labels: Other RRBO projects

This is super impressive. Way to go Julie! Safe travels and keep us Michigan folk posted. We may want to buy some of this coffee.

You do such wide-ranging and important work! The University should be proud to have you.