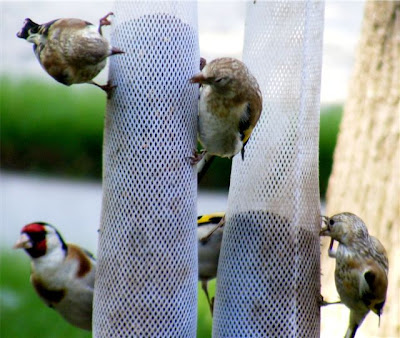 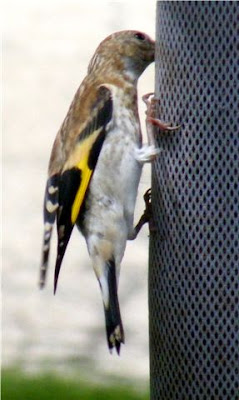 The spring 2009 survey season took place from 9 April through 9 June. There were surveys on each morning for the first 57 days, and two of the last four days. On campus, 140 species were recorded (another 17 were recorded in Dearborn off-campus). This is nearly 6% greater than the previous five-year average of 133 species. The peak calendar week was 17 through 23 May with 95 species, and the peak day was 18 May with 86 species.

Weather
In contrast to some recent spring seasons, spring 2009 seemed fairly "normal." The National Weather Service noted (PDF) that in Detroit, average tempertures for March through May were just a degree above normal, while rainfall was nearly 3.5 inches above normal. Most of the precipitation was in April; May was slightly below normal. Most noticable to me was the steady progression of vegetation leaf-out and blooming that was not interrupted by extreme cold (as in 2007) or abbreviated by extreme heat. Insect emergence and growth seemed normal. Although anecdotal, it appeared to me that food resources for migrants were adequate to abundant.

Arrival dates
While I track arrival dates for all migrant species, I especially focus on 43 regularly-occurring and conspicuous migrants. Of those, three species arrived earlier than had been previously recorded for Dearborn: Ruby-throated Hummingbird on 1 May (previous date, 1 May), American Redstart on 30 April (previously 1 May), and Indigo Bunting on 28 April (previously 29 April). Two species tied their record early arrival date: Tennessee Warbler on 29 April, and Black-throated Blue Warbler on 30 April.

Extremes are interesting, but deviation from a more typical arrival date is probably a more accurate depiction of any shift in migratory phenology. I have 14 to 16 years of spring arrival dates for nearly all of these 43 species. There are a number of ways to calculate central tendency (or the "expected" middle value of a data set). For simplicity's sake in this example, I calculated the arithmetic mean, or average arrival date for each species to compare to this year's arrival dates. For the 43 species:
Most instructive would be an analysis of any shift in peak arrival periods, or the dates in which different percentiles of each species peak (e.g., the date each year in which the first 20% of Ovenbirds of the season have been recorded). I am in the process of computerizing all of our spring survey data back to 1994. Soon, I will have completed the input of 10 years of data, and will begin some preliminary analyses.

Highlights
There were a number of species represented by only one to a few sightings. Often this is due to a lack of habitat on campus so that visits or flyovers are rare (Common Loon, American Bittern, Grasshopper Sparrow). A few are just rather cryptic and hard to see, hear, or identify (Philadelphia Vireo, Connecticut Warbler, Lincoln's Sparrow). Some species occur annually or nearly so, but are at the edge of their range in southern lower Michigan, and are often considered "good birds." This year, they were Hooded Warbler (3 birds) and Summer Tanager (3 birds). Prothonotary Warbler is a species that does occur in the region but only locally, and 2 different birds were recorded this season. Falling somewhere between lack-of-habitat and actually-rare was a single Grasshopper Sparrow recorded on 18 April.

Species that in past years have typically been more common but were only seen once or a few times this spring were Red-headed Woodpecker, Acadian Flycatcher, Golden-winged Warbler, and Rusty Blackbird. All of these species are also declining regionally, if not range-wide.

You can look over the summaries of each week here at Net Results for more highlights.

Missing on campus, and with only one report in the city this spring, was Orchard Oriole, normally seen every year. The most surprising miss this spring was Willow Flycatcher. This is a typically common species, but was not definitively recorded this year. It is likely they were actually present, as a number of non-singing Empidonax flycatchers were seen, but without hearing them they can't be distinguished from the similar Alder Flycatcher. Overalll, Empids in general seemed scarce. The three most common species (Least, Willow, and Alder) were down 43% from last year. Their numbers were roughly the same as the previous 5-year mean, but a longer look-back period would be most useful and these calculations have not been adjusted for effort.

The most numerous species by number of individuals counted was Brown-headed Cowbird, a species which has made monumental increases the last few years. Four or five years ago, we'd expect to count around 200 in a spring season. This jumped to over 300 the next couple of years, then over 1000 last year to 1671 this year. I suspect that overwinter survival in the city has something to do with this, as numbers have been increasing recently due to the presence of the sunflower fields around Dearborn.

Other numerous species were American Robin and Northern Cardinal, also with over 1000 tallied. Yellow-rumped Warbler came in fourth place at 946, while American Goldfinch rounded out the top five at nearly 900 counted.

In general, numbers seemed to be improved from the last couple of years, but peak numbers of warblers, for instance, were not impressive. Twenty-nine warbler species were recorded, but only 9 species had peak numbers over 10 individuals and all of those were 20 or fewer individuals except for Yellow-rumped Warbler, which had a high count of 129 on 30 April.

More interesting trends will no doubt be revealed once I get all the years of survey data computerized and dumped into a stats program. I'll also be able to produce some fairly detailed charts on peak migratory times for many species.

Many thanks to Darrin O'Brien, Greg Norwood, Jim Fowler, and Mike O'Leary who assisted with surveys this spring.

I'll be working on data input and some other projects, mostly in front of the computer, over the summer and will be posting periodic updates here. Then fall banding kicks off in mid-August!
Posted by Julie Craves No comments:
Email ThisBlogThis!Share to TwitterShare to FacebookShare to Pinterest
Labels: Birds and bird surveys

The transition from migration season to breeding season is essentially complete. For the week ending today, 55 species were recorded on campus on 4 survey days. Nearly all were resident or locally breeding species.

True passage migrants were:
And local breeders (although not on-site) were:
With thick foliage concealing often-silent females, finding late migrants is often a matter of luck. Birding at this buggy time is enough of a challenge that many people quit going out late in May. I have June records for most northern migrants, and I'm sure they are probably more common than even these records indicate. I'll still go out and see what I can find a few times in the next week or so, but the formal spring survey period is over. In my next post, I'll be summarizing the whole season.
Posted by Julie Craves No comments:
Email ThisBlogThis!Share to TwitterShare to FacebookShare to Pinterest
Labels: Birds and bird surveys

We're in the final stretch of spring migration. In fact, the week ending 3 June will be the last 7-day survey week of the season. The next 7-day period will be surveyed 4 or 5 days, but since things are winding down, I feel I need to sleep past 5 AM for the first time in a month!

This week, 74 species were recorded on campus. There are still northern/boreal-nesting birds trickling through. They included
Other species of interest that nest regionally, but not on-site, included
Of interest to me was the reappearance of Brown Creepers. I'd been seeing them regularly through the early part of migration at the north end of campus near the Rouge River. One in particular was singing up a storm. The last time I heard or saw one was 3 May. Then one showed up near the usual place on 28 May, and two were together there on 3 June. We've had nesting records before, so I am keeping my eyes peeled for a whole family.
Posted by Julie Craves No comments:
Email ThisBlogThis!Share to TwitterShare to FacebookShare to Pinterest
Labels: Birds and bird surveys

This past week saw a reduction in the numbers and diversity of birds, with 80 species recorded on campus. Daily species totals ranged from 38 to 58, with an average of 51. Nearly every day had wind directions from the north or east, which are not conducive to good migratory flights. As might be expected this time of year, the trees are fully leafed out, more female migrants are present, and the combination of hard-to-see and not-singing made for a challenge.

Of the 18 warbler species recorded in the past week, the highlight was a female Connecticut Warbler on 26 May. Unfortunately, it was seen briefly and not relocated. The dominant
warblers are the mid- and late season varieties: American Redstart, Wilson's Warbler, Canada Warbler, Magnolia Warbler, and Blackpoll Warbler, although numbers are small.

The other "good bird" was the third spring 2009 record for Summer Tanager, this one a female on 23 May. It was also seen briefly before disappearing.

Kingbirds have finally been on the increase, but small Empidonax flycatchers are still scarce. Both species of cuckoos have been seen this week, with the first Yellow-billed Cuckoos arriving on 22 May. On 25 May, three were seen together -- and one was carrying a stick, perhaps preparing to build a nest.

There are still a handful of Swainson's Thrushes being found every day. Other lingering migrants include Black-throated Green Warbler (one heard today) and White-crowned Sparrow (an individual recorded nearly daily up through yesterday).
Posted by Julie Craves No comments:
Email ThisBlogThis!Share to TwitterShare to FacebookShare to Pinterest
Labels: Birds and bird surveys
Newer Posts Older Posts Home
Subscribe to: Posts (Atom)