The 22nd year of RRBO's Winter Bird Population Survey has been completed. Those of you that know me know that I do not like winter. I can't believe I've been doing this for so many years, and the weather this year made it especially difficult, mentally and logistically! This will wind up being the second snowiest winter on record for the Detroit area. There was snow cover the entire late-December to late-February survey period, and walking was often difficult. Worse were the cold temperatures. Despite many days of sub-zero temps or wind chills that at times prevented me from going out, I still got in 15 surveys (the average is 14). On the "bright" side, water was frozen most of the time, and I was able to do the around-the-lake portion of my route on the lake, which was easier to walk on!

This year 42 species were tallied. The previous annual average number of species is 38. Two new species were added this year: Purple Finch and Red-breasted Merganser, bringing the cumulative species total for 22 years to 75. The Purple Finch was seen twice. This is a species that is a fairly common migrant here, but not very frequent in winter and never recorded on a survey day. Thus, it was perhaps and "expected" species.

Much less expected were the Red-breasted Mergansers, which usually overwinter on big water (oceans, large lakes, or in smaller numbers on large rivers). Several were seen with Common Mergansers (and some Common Goldeneyes) in the Rouge River where the lower Rouge enters the main river at the south end of campus. This occurred on the last survey date, after a very long period of cold weather, on the only open water in the vicinity. This was only the second record of Red-breasted Merganser on campus and one of the few Dearborn records outside spring migration. Here is my lousy cell phone photo of an adult male: 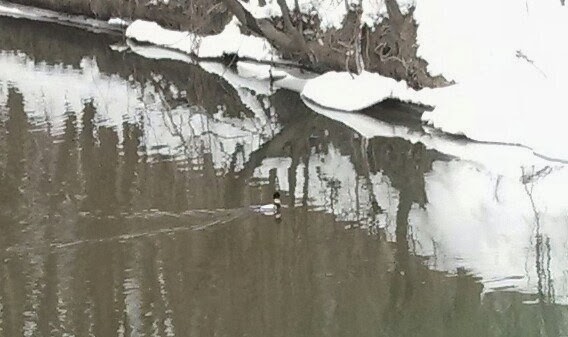 The ice cover was responsible for the low numbers of our most common waterfowl over the course of the survey period. Canada Goose and Mallard were each only recorded on one day. Great Blue Herons and Belted Kingfisher were also mostly absent this year.

Last year, Merlin was a new species, and we had another this year, on 10 February.  The falcon was sitting along the river near the waterfall behind Fair Lane Estate, and was spied by an American Crow, the only crow recorded during the survey period. The fiesty Merlin turned the tables on the crow and chased it off. A fun, yet bittersweet, encounter, given the continuing lack of recovery of crow numbers here in Dearborn. This marks the tenth time in the past 12 years when fewer than 10 crows were counted on the survey.

On the other hand, people commented that Blue Jays seemed quite abundant this year, which was confirmed on the survey. Our average is 122 a year, and we had 216 this winter, a record.

After last year's winter finch invasion, we had no Pine Siskins, Common Redpolls, or other species usually included in this group (including Red-breasted Nuthatch). But due to deep snow we did have a lot of seed-eating birds hanging around our organic garden, native gardens, and bird feeding areas. Mourning Doves, White-throated Sparrows, Dark-eyed Juncos, House Finches, and House Sparrows were all counted in above-average numbers.

On the RRBO web site, you can find the full results of all 22 years of surveys, along with information on the protocol.
Posted by Julie Craves
Email ThisBlogThis!Share to TwitterShare to FacebookShare to Pinterest
Labels: Birds and bird surveys

Thanks for braving this season's winter weather. And we just got another dump of snow - March 1st - to contend with.