We are well on our way to banding the fewest birds in any fall season in 20 years! The fewest new birds we have banded prior to this year was 739 in 1996. Our "slowest" year was actually 2008, when our capture rate (birds banded as a function of the number of nets we used and the number of hours we had them open) was 33.4 birds per 100 net hours. You can see our current numbers in the right sidebar. I'm pretty sure there is not enough time left in the season for this year not to come in dead last in both categories.

While a lack of birds is disappointing (and kind of alarming), these low numbers are providing valuable data.The weather this growing season is mostly responsible, in particular the drought.  In a previous post, I noted the low numbers of young birds we were banding. This has continued to be the case. American Robins in particular have exemplified the kind of season we are having. 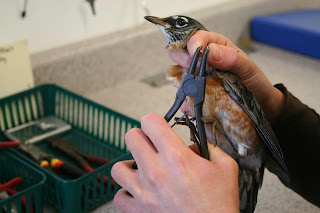 The average number of robins we band in fall is 188, with 300 or so not being uncommon. Prior to today, we had banded only 15!! Today we had 17 more, bringing our total to 32, a remarkably low number.

Based on our 1992-2011 fall data, we can expect around 76% of the robins to be hatching-year birds. This year it is only 23%. This is an indication that robins failed to fledge a "typical" number of young. Since many of the robins we are catching now are migrants likely to have nested elsewhere, this suggests that nesting failure was not just a local problem. And indeed, the drought covered a very large part of the continent.

One interesting aspect is that nearly half young birds I have captured recently still had some spotting on their breasts; this is the plumage they have when leaving the nest. Typically, only about 3% of hatching-year birds have spots this late in the season, having already mostly completed their fall molt. Similarly, 61% of the adult robins are still completing their fall molt. In the past, only about 16% were still molting at this time of year. It looks like, then, that many robins nested late this year -- probably after losing an earlier brood.  It's possible that the skewed ratio of young to older birds may even out a bit in the next couple of weeks.

The prolonged and severe drought contributes to low reproductive success by diminishing food supplies, especially for birds like robins that utilize a lot of leaf-litter or soil invertebrates to feed their young. Besides just reducing the number of birds available, the dry weather contributes to our low capture rates by impacting the fruit crop. Our very early spring heat wave also compounded the failure of many types of wild fruit, as I discussed earlier in the season. Fruit is a vital food source for many species of migratory birds, and of course, a main topic of our research.

In short, many of our staple fruiting plants had small crops or did not fruit, or fruited later than usual. I noted that locally, fruit crops were better in areas adjacent to water. Our banding site is not (unlike many banding stations, which are located in some sort of coastal situation). So this year provided interesting insight into the impacts of growing season weather.

In a future post, I'll provide an update on the 2012 fruit crop and what we found birds were eating.